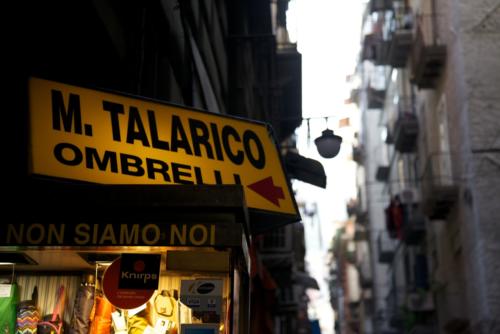 The atelier of Mario Talarico is the least prepossessing of any craftsman I have visited. Sitting in a tiny alley off the Via Toledo in Naples, it is festooned with cheap, tacky umbrellas. Most cost €10; all are made in China. There is clearly demand, despite the Mediterranean weather, because Mario actually has two shops, one either side of the alley. Both are equally unattractive. It is only by picking the correct shop, on the left as you ascend the hill, and letting your eyes adjust when you enter, that you discern this is the workshop of a very fine umbrella maker.

The draws were the first thing I noticed. Two rows of them, in ancient wood, as you find in old apothecary tables. Yellowed labels and bulging contents indicated that they contained a variety of small metal parts. There was certainly craft going on here. 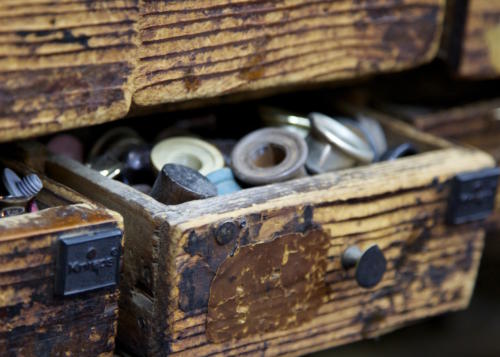 Next, below them, the bench. Mario says it is almost 200 years old. Given that the company was founded in 1860, that means it was pretty well used before Mario even got his hands on it. Now it is dilapidated. A whole chunk of the front has been worn away, as if a shark took a great bite out of it. It is covered in sawdust from the drilling machine, used to bore holes in the umbrella handles and tips. A small stool sits between the two, under a shelf such that Mario – who is not small – has to crouch slightly as he works.

Before we get all Dickensian, it should be said that Mario’s nephew, Mario Jr, works standing behind the counter. He has all the room and light he requires. Indeed, the light is reflected and multiplied by the scores of framed pictures that hang around him: Mario with the Pope, Mario with Fendi, Mario with Berlusconi. A dozen more cuttings are preserved under the glass counter-top. Some are suspended from the ceiling. 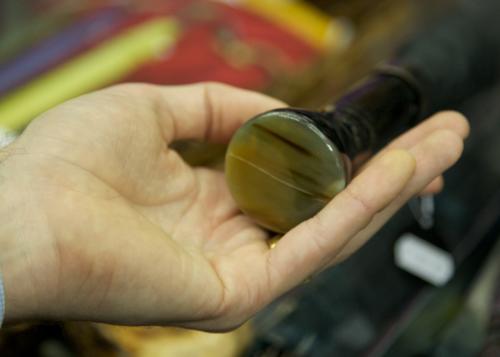 And then, last of all, you notice the umbrellas. They are camouflaged (like herds of gazelle) by their very number, stacked close and several deep behind the counter and on the opposite wall. Many are in plastic sheaths. But the handles absorb your attention, once you notice them. Beeches, chestnuts, cherry wood, Malacca and bamboo, all carefully and patiently worked with steam into a curve of (at least) 180 degrees. The wood is selected from the handle downwards, though. That is obvious from the fact that a bulbous, polished knob remains on the end of the handle, like a crown. The rest is clipped and polished, but not whittled, down its length until it finishes, on the other side of the canopy, with a chunk of pale buffalo horn.

I don’t know anything about umbrellas. Or rather, I didn’t until I watched Mario and Mario Jr making one. And I’m not going to make a case that there is as much craft and skill in it as cutting a suit or stitching a shoe. But there is something very satisfying in the making of an immediately practical, useful object. With speed bordering on showing off, Mario cut a slit in the shaft and inserted a metal hairpin; he aligned the metal cylinder that held all the metal arms of the canopy; and he brought the two together several times, tweaking the pin with a pair of pliers until the connection was perfect. Until the umbrella snapped simply shut. 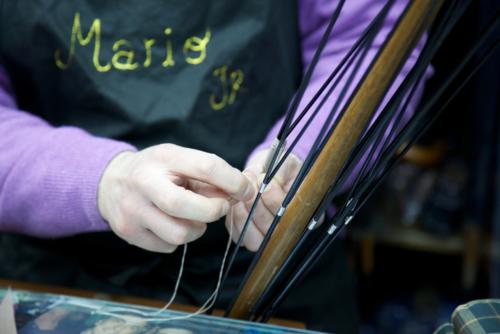 Mario Jr had previously sewn the canopy on with little strips of the same waterproof cloth, and created the skirt that will protect the central mechanism from rust. He sliced off each piece of cloth, by eye, with a big pair of shears. Nice touches, particularly so for being impossible by machine.
Mario is dismissive of other umbrella makers. It is the arrogance due to a man who has been making for all his life and been asked scores of times to expand, to make more for other brands and retailers. His nephew is more generous. Both are fervently committed to making by hand for years to come, which is only incongruous when you leave and faced once again with Mickey Mouse, staring inanely across the Due Porte. 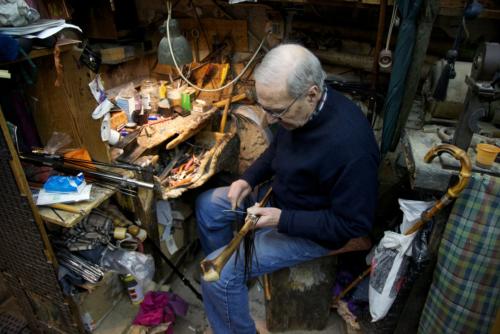 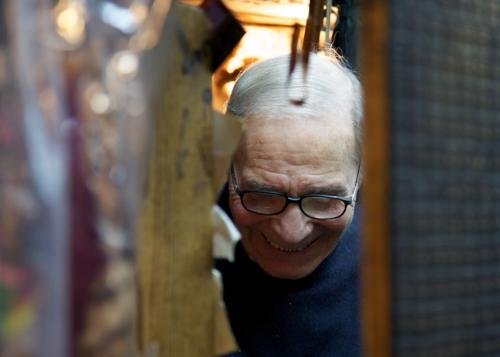 You can follow the discussion on The umbrellas of Mario Talarico, Naples by entering your email address in the box below. You will then receive an email every time a new comment is added. These will also contain a link to a page where you can stop the alerts, and remove all of your related data from the site.

I haven't considered one to be honest. I'd suspect it would stand out a bit more than you'd want. I'd recommend something darker, a mid-brown or darker, or navy, olive etc

How to buy a quality panama

I haven't seen 2 or 3 in person, but I'd worry they both look a little smart - slightly crisp fabrics. But 1 is also much more casual, more like workwear almost

A high rise trouser will be more accommodating to the, ahem, better endowed.