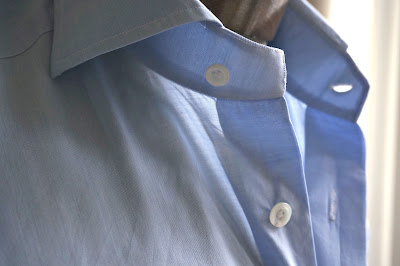 [NOTE: Luca Avitabile, the cutter for men’s shirts at Satriano Cinque that I use, has split from the company and set up on his own. I recommend contacting him for any inquiries, at [email protected]]
The second post in this series on bespoke shirts looks at Satriano Cinque, the Neapolitan maker that was set up by Gabriella de l’Ero a few years ago.
Luca is the men’s cutter, and it is he who cut this shirt. You can see detailed pictures of his work here and shots of the two fittings we did on the shirt here. 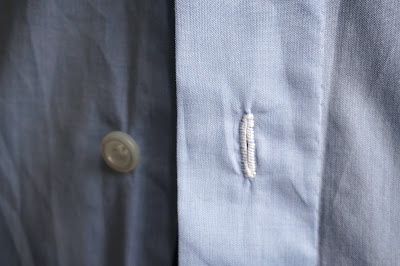 The first thing you notice about the shirt, in common with all those I have had made in Naples, is its weight. It is incredibly light, which is partly due to the cloth but also the extremely thin fusing in the collar and cuffs. The seams, at the sleevehead for example, are also that much wider, which makes it less rigid. The whole thing bundles up into a mere handful of cotton.
To be honest, the cloth is too light for most of the year in England. It also creases more than heavier cottons. But we will make some more in different cloths next time around. (There will definitely be a next time.)
The hand work sits half way between English shirts, which typically have no hand stitching at all, and makers like Burgos of Madrid or other Neapolitan makers like Kiton. The functional things are done by hand – attaching collar band and sleeve – as well as aesthetic details like buttonholes and attaching buttons. But the bottom edge and the cuff are done by machine. 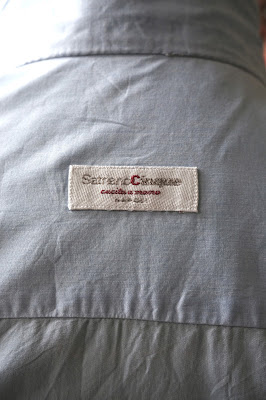 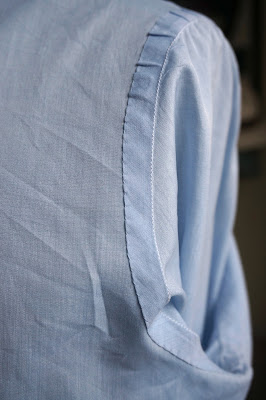 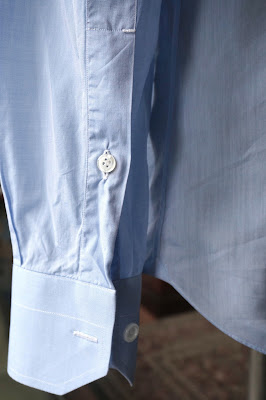 This is reflected in the price, with shirts starting at €180. The only problem is you have to go to Naples, at least twice. We are trying to arrange a series of visits to London, however, to tie in with tailor Solito (for whom Satriano makes the shirts).
The fit of the Satriano shirt was good. Not perfect, and not that much better than Burgos despite two fittings. (Though Burgos effectively had one fitting, given I sent it back to be changed once.) For the next order I will have the waist taken in by around an inch. Interestingly, Satriano uses darts in the back where none of the other makers reviewed this week do. 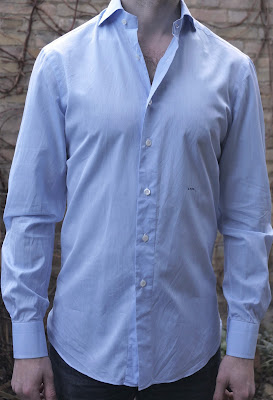 One of the most notable differences with Satriano was the shape of the collar band. It noticeably widens around the side of the neck, before narrowing again at the front. The effect of this is to make the collar stand up much more when not fastened. It sits happily under a jacket or crewneck sweater – indeed, it’s the only (non-buttondown) shirt that sits happily under my Anderson & Sheppard jackets, which have a larger and tighter collar than those of any other tailor. 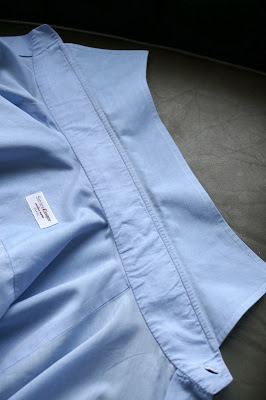 Other differences: the third button sits a little low, exposing more of the chest when worn without a tie (I may have this raised a touch); there is a bigger tie gap than Burgos, but less than Segun Adelaja (review tomorrow); the initials were straighter than Burgos, but not on the bottom edge as I requested (again, this will be changed next time). 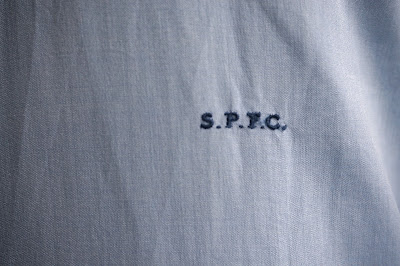 Overall, my favourite shirt so far, with exactly the right balance of hand stitching and machine for my money. Presuming the tweaks work out with the next order, this is likely to be my shirt of choice from now on.
Ratings:
Cut: 8
Make: 8
Style: 9
Finishing: 9

See the introductory piece with links to other shirt reviews here.

You can follow the discussion on Satriano Cinque: Bespoke shirt review by entering your email address in the box below. You will then receive an email every time a new comment is added. These will also contain a link to a page where you can stop the alerts, and remove all of your related data from the site.

Thanks. I'd be interested in how the trousers work - that would be the piece I'd worry about on its own. In terms of look, keeping a crease, and longevity

Des is now working from home (Pontefract) and still very much active.