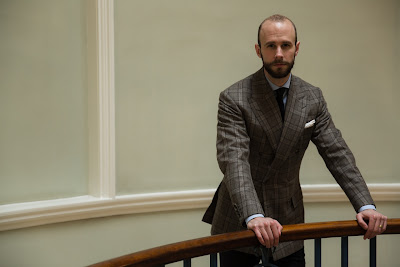 I have a few Anderson & Sheppard DB suits, but no jackets. I have found that the jacket of my royal-blue flannel suit, however, works well on its own, and that led to this commission last year for a lightweight DB jacket in a brown Loro Piana cashmere.
To work on its own, of course, a jacket must distinguish itself from a regular suit in either pattern or cloth. This does both, with the large Prince of Wales check and spongier finish of cashmere setting it apart from a hard-finished worsted in plain navy or grey.
Anderson & Sheppard DBs work well, I think, because their large and drapey look needs some style injected from somewhere else – whether that be in the cloth or in design details such as the double breast. A friend of mine has a single-breasted A&S suit black mohair with peak lapels, which works for the same reason.
The old phrase is that A&S suits were for me who had their own style, and didn’t need any from their suit; I prefer to add something to them myself.
If you are slim, as I am, the drape-cut DB also creates a particularly complimentary effect in the chest. Both the sweeping lapels of the DB and the extra draped cloth create an impression of bulk, and together the effect is exaggerated.
Last week, in the first of these posts, I said there was little point in a direct comparison between the four jackets. But I’m intrigued nonetheless, as to which is everyone’s favourite. So tell me, which do you like best, and why? 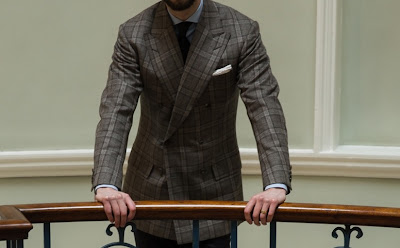 You can follow the discussion on Anderson & Sheppard DB jacket by entering your email address in the box below. You will then receive an email every time a new comment is added. These will also contain a link to a page where you can stop the alerts, and remove all of your related data from the site.

Hey CK This wasn't a collaboration, no, I was just trying their RTW ones and having a couple of fit changes made. It is a difficult area though. And one several brands are working on - Saman Amel, Stoffa, BHL

My first commission was a black heavy chalk stripe with scarlet lining - I looked like the Al Capone for the 1990s.

Hi Astemir, The proportions are the same as the double-breasted Anderson & Sheppard jacket in this post.

Hi Astemir, Actually, I think I might have misspoken there. The gorge line itself - the seam - is not that flat. It actually curves upwards quite steeply. But the top of the lapel is quite flat. Look at the direction it points, compared to…