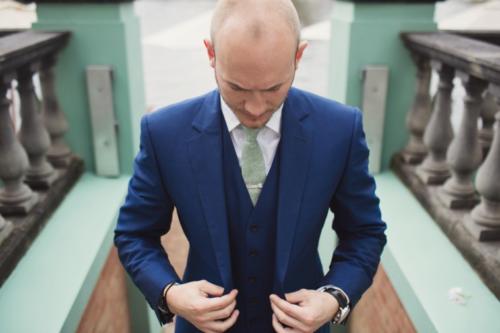 Earlier in the summer my brother-in-law had this suit made-to-measure with Gieves & Hawkes. Normally, I don’t offer opinions on things that have not been made for me, but since I was present at the commisioining, the fittings, and have since seen it in action, I thought it would be useful to write a short review.

I think it’s fair to say that the suit lived up to all the benefits of made-to-measure, but also showed its weaknesses. The biggest benefit is the ability to alter the proportions of a suit more than any alteration could. In this case, it gave Greg (pictured) the drop from chest to waist that he requires, given his body shape. Most suits are made with a six-inch drop – 38-inch chest for a 32-inch trouser waist.

There are ways to escape this ratio, such as slimline fits with a seven-inch drop, and buying separates. But neither would have helped Greg in this case, as seven inches would have been insufficient, and the ratio he needed altering most was between chest and waist on the jacket. 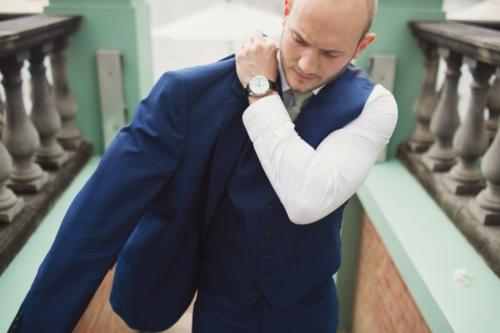 There was an initial consultation, one (forward) fitting, and then the finished suit arrived, which required some minor alterations. At the fitting, the biggest areas to change were the waist, running up into the back, and a little tightening of the neck. The waistcoat also fit pretty well, which is surprising for MTM. (The lack of sleeve cuff shown is more down to the shirt than the suit.)

Nonetheless, this is not bespoke. The measurements are all two dimensional, looking at width and height, and there is therefore little opportunity to look at things like the pitch of the sleeve, the curvature of the back or the precise run through the seat of the trousers. These are the weaknesses of MTM.

As to quality, this a floating, half-canvassed suit but with little handwork. The collar, to take an obvious example, is not attached by hand. Gieves do offer two levels above this, one made in Italy with a full canvas and one above that made in UK with the highest level of handwork. (The Italian is also a much softer cut.) Both are more expensive than this option, however, which was £1900 (£1495 for a two-piece). It is made in Mauritius.

The material is a lightweight royal-blue mohair, which did raise the price a little. Total time to make was 10 weeks. Overall, I think it was a solid MTM experience, if on the expensive side. Made to measure is something Gieves is pushing more, with plans for Private Tailoring (as they call it) to include a service to preview your suit before it is made – with ability to change cloth, lapels, buttons etc and see the result on-screen. The usefulness of that, of course, will be entirely in the execution. 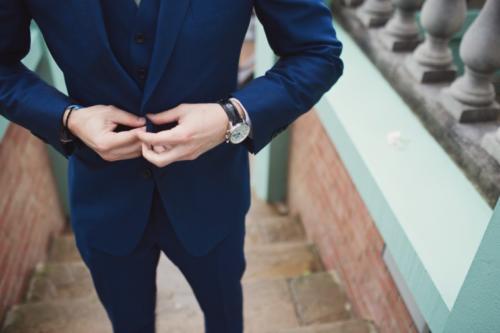 You can follow the discussion on Gieves & Hawkes made to measure by entering your email address in the box below. You will then receive an email every time a new comment is added. These will also contain a link to a page where you can stop the alerts, and remove all of your related data from the site.