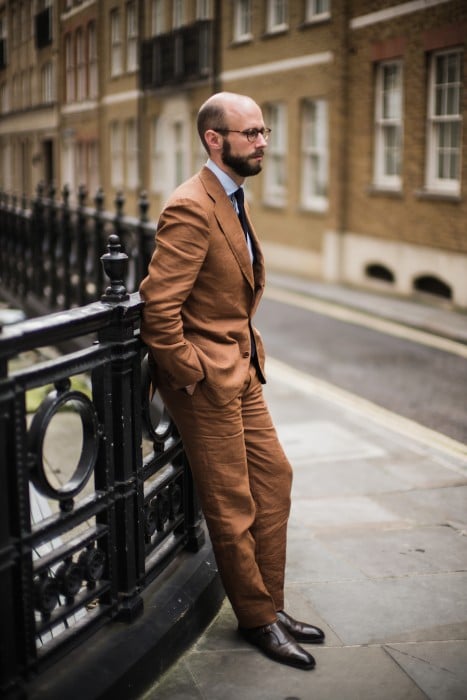 Tobacco brown’s a nice colour, isn’t it? Definitely informal – due to its lightness and saturation – yet with a quiet sophistication. Colonial, particularly in linen, but without the baggage of cream or tan.

This is 8-ounce from Scabal (801490). Ideally it would be heavier, closer to 13 ounces, but I’m willing to trade a little weight for great colour.

The suit was made by Sastreria Langa, one of the tailors in Madrid I commissioned from back in July. Joaquin Fernandez is the cutter: a relatively young guy but with a lot of experience (having started at the age of 16). He is also one of the few Spanish tailors that speaks any English (the Calvo de Mora sons being the others).

Joaquin is deliberately creative and broad in his technique, making both normal and shirt-shoulder jackets, and with a penchant for bright or strongly patterned linings. I avoided those with this suit – it’s not my style, and anyway the cloth has enough character on its own. 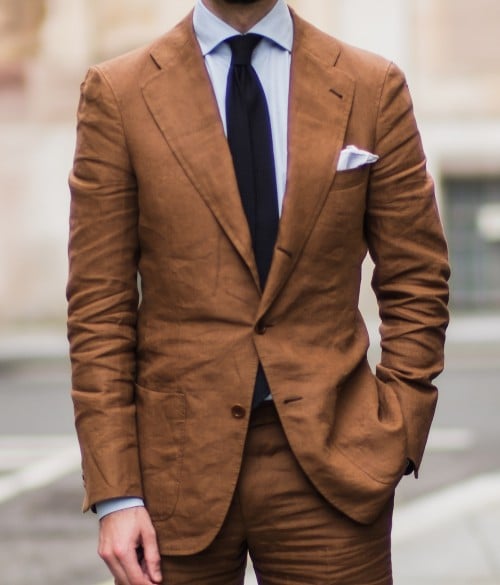 Initially, Joaquin was impressive. I flew into Madrid one evening with the arrangement to be measured and fitted on several things the next day. The tailors all knew the cloth in advance, so the idea was they would measure me in the morning and cut a rough, first fitting for the afternoon.

Joaquin did this flawlessly. The fundamentals of the fit were great – balance, neck, pitch etc were all spot on. We slimmed the trousers down a little and narrowed the waist on the jacket, but that was it.

The second time I went to Madrid, the idea was to have a forward fitting in the morning, another in the afternoon if the tailor wanted it, and then to have the jacket sent went finished. Joaquin misunderstood, and when I arrived in the morning the whole suit was finished.

That wasn’t a problem in terms of fit, as the first fitting had been so good, but there were a couple of style issues – particularly the shoulder, which was a normal rather than shirt-shoulder. (I wasn’t a fan of Joaquin’s regular shoulder style, which is a little extended and almost kicks up at the end.)

To wrap up a rather long story, changing the shoulder took much longer than a day, so it wasn’t until the suit arrived in London that I saw it completed. Perhaps inevitably, the execution wasn’t ideal: the excess at the top of one sleeve was greater than the other, making the shoulder appear wider. 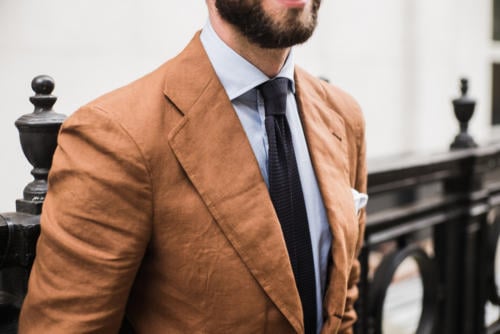 The difference is barely noticeable now. Linen is a very forgiving material, and as soon as the jacket had been worn a couple of times the sleeve wrinkled up and the discrepancy was gone. Still, that wouldn’t have happened on a worsted, and there are a couple of signs of similar lapses elsewhere. The side-straps on the trousers don’t function perfectly, and some of the finishing inside is a little rough.

I love this suit, primarily for the colour. But it’s also well fitted, and given that Langa only charges €1800 (plus VAT, in Spain), with as much hand work as anything on Savile Row (though not always in the same places), it’s also extremely good value. I would just suggest a slightly less rushed fitting process, and careful attention to the details.

More details later in the week. 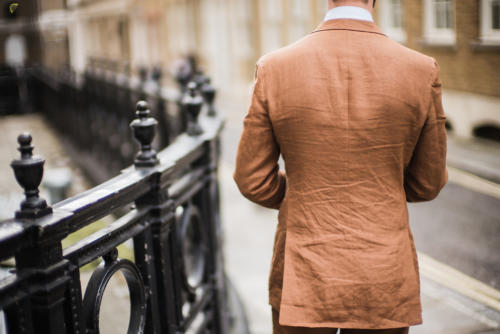 You can follow the discussion on Linen suit from Langa, Madrid by entering your email address in the box below. You will then receive an email every time a new comment is added. These will also contain a link to a page where you can stop the alerts, and remove all of your related data from the site.