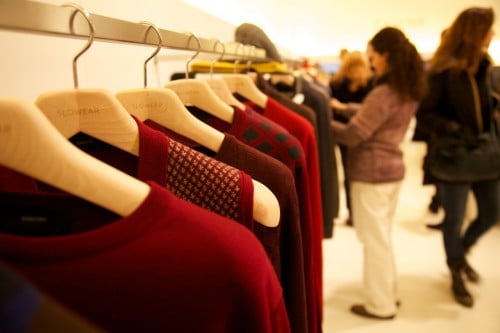 Profit margins among clothing retailers don’t vary that much – at the outside, between 5% and 25%. The vast majority are 10%-20%.

I mention this because I’m constantly surprised by consumers’ ideas of how brands are ‘ripping them off’. The fact is, the first 20% of the price you or I pay goes to government (in the UK – VAT), the next 10%-20% goes to the brand as profit, and the remainder is costs.

There seems to be a strange idea among consumers that brands just charge ‘whatever they can get away with’. That luxury brands in particular charge exorbitant prices and reap huge profits as a result.

Luxury brands certainly have higher margins. One of the reasons the industry is so attractive is that margins of 18%-25% are both achievable and sustainable (the latter being by far the most important, as many new launches have discovered in recent years).

But 20% isn’t that high. Last week, commenting on a comparison between some £200 boots and a £1000 pair on this site, a friend commented that ‘the latter is probably mostly profit anyway’. No one has 80% profit margins. In fact, given that production costs (including the manufacturer’s profit) are usually in the range of 25%-30%, the £1000 boots could cost £300 just to be made.

The sensible thing to focus on is costs – the bit between the profit and the production. Luxury brands may spend a large chunk of that on advertising and marketing; a chunk more on store design and branding; and another slice on catwalk shows. Paying for that is the only way in which you are being ‘ripped off’.

As we saw in our analysis of Savile Row costs, a lot more is spent on making a bespoke suit than in most clothing production (at least twice as much). But the difference between a tailor and a luxury brand is far more marked in these marketing and advertising costs. A tailor’s may be zero; a brand’s may be more than anything else.

So if you’re shopping in the sales over the next few days, be assured that once you have a 30% discount, the brand is making no money off your purchase (margin plus the reduction in VAT). It’s the catwalk models and full-page ads you’re paying for now.

– The brands are of course recovering costs, which is why they have the sales. If they don’t sell the stock (more of a pressure in a seasonal business), they make a bigger loss.

– The profit is more complicated if a brand is not selling through its own retail, but it’s hardly worth getting into that.

You can follow the discussion on Luxury profit margins by entering your email address in the box below. You will then receive an email every time a new comment is added. These will also contain a link to a page where you can stop the alerts, and remove all of your related data from the site.

No, sorry, not until next year. Do email [email protected] if you want to be on the waiting list though - always worth it in case we get returns or exchanges

Hi Peter, It will vary hugely with the material. Even just with wool, a dense worsted will crease a lot less than a loose soft woollen. In the end you will need to live with some creasing, but you can also help it by hanging…

Great video Simon, and would like to echo the comments regarding Ben - excellent teacher and comes accross as very down to earth. Would be great to get a few more close ups of his work during the video. Additionally, does he have suggestions for…