Perceptions of the double-breasted jacket

In our previous article we covered what is perhaps the ‘standard’ choice for a suit or jacket (a single breast with a notch lapel). The next obvious style to consider is the double breast. Yet for such a recognised alternative, it occupies a relatively small, perhaps even non-existent part of the modern man’s wardrobe.

This is largely a result of fear or lack of understanding. The DB is often seen as old-fashioned, and therefore worn by older men; it is seen as serious and formal, particularly in a pinstripe; and many consider it unflattering.

Let’s set out what sits behind these perceptions.

What are the benefits of a DB jacket?

One thing that’s certain is that a double-breasted suit adds breadth to a man, as it takes the standard, single-breasted lapel and pulls it further across the body. It is a strong, diagonal streak.

The peaked lapels also create breadth because they point outwards. Even if the peak appears high on the lapel, the top of it will be relatively horizontal, slanting across the chest.

And the buttons, whether there are six, four or two, create horizontal lines as well – or indeed a box, if there are six or four.

You can change it all

A double-breasted jacket can therefore be good for a slim man with narrow shoulders, giving him much-needed breadth.

But it can still suit a bigger or wider man. For the effect can be greatly reduced, altered or simply personalised with the changing of the button positioning.

Imagine a standard double-breasted jacket – as pictured above. Now move the waist buttons (the two central ones) gradually down. As you do so, the lapel lenthens and becomes more vertical, running down the body. If you do the opposite, and move the buttons up, the lapel does the opposite, shortening and flattening.

Small changes to the button position can radically change the angle of the lapel and therefore the amount of breadth it gives to the wearer.

Now consider the jacket as second time. This time, move the two waist buttons slowly towards each other. This makes the lapel more vertical again (though also shortening it slightly), and doing the opposite makes it more horizontal.

One should never push this too far, but it quickly becomes apparent how important the placement of those buttons is. To the lapel angle, and to the size of the box created by the buttons.

Customers of bespoke or MTM tailoring can try this with their tailor. Ready-to-wear customers should compare jackets from different brands to see the difference.

The Rules and How To Break Them. No 5.

Button options for a DB jacket

The number of buttons on a DB jacket, and where they fasten, also makes a big difference to the look. This is usually described using a numerical system, where 6×2, for example, means six buttons overall of which two rows can be buttoned (as in both images above).

This is the most traditional and common option. Then there is then the low-buttoning 6×1, the military-looking 6×3, the square 4×2, the 4×1 and the rare 2×1. Each has a different effect, both in terms of formality and style.

Let’s look at the effect of each in turn. The 6×2 arrangement is the most traditional, and perhaps lends itself to more traditional cloth and styling.

Above is a great example of a classic navy chalk-stripe, perfect for a more conservative business outfit. However, the number of buttons and the height of the buttoning can look bulky to some, and perhaps not rakish enough.

This is solved by the next option – the 6×1, where there are still six buttons but they fasten on the bottom row.

Cifonelli‘s royal-blue double-breasted jacket above is a nice example. By buttoning at the last row and cutting the cloth to open more across the chest, this characteristic Cifonelli style creates a more striking look and more room for the shirt and tie.

The effect is accentuated by having the jacket slightly shorter – normally only employed on jackets rather than suits.

Four buttons looks less bulky than six. So the next option is getting rid of the top two buttons entirely, leaving us with the 4×2 shown above (from Henry Poole).

This can be a good choice for men that want to try the style of a DB, but fear six buttons will be overkill. It gives a cleaner look to the chest, and you can, after all, merely add the missing two at a later stage.

Given you rarely find this style off the rack, it can also highly a bespoke suit (though of course, you could also remove the top two buttons on a 6×2, if that’s possible without leaving a mark on the cloth).

Just as with the 6-button configuration, there is then the choice to button to the bottom row of four – as shown by the example of a 4×1 by Edward Sexton in a cream flannel above.

(I should say at this point that with most jackets you cannot just decide to start buttoning to a different row. The jacket will usually be cut to button to a certain point, and if you change that, the shape through the waist will be ruined. There are versions of a DB, largely from Italy, that are soft enough and have enough control in the collar to switch where the buttons are fastened. But they are rare.)

With the 4×1, the top row of buttons is slightly further apart to avoid creating a square. Note how the buttoning point is lower compared to the 6×2 or 4×2 above, increasing the length of the lapel and so reducing some of the bulk that results from the overlap of the cloth.

Lastly, there is the 2×1, with simply two horizontal buttons, both appearing to fasten. This is the most unusual and is unlikely to be popular. But it can be a starting point, with more buttons (even buttonholes) added later. 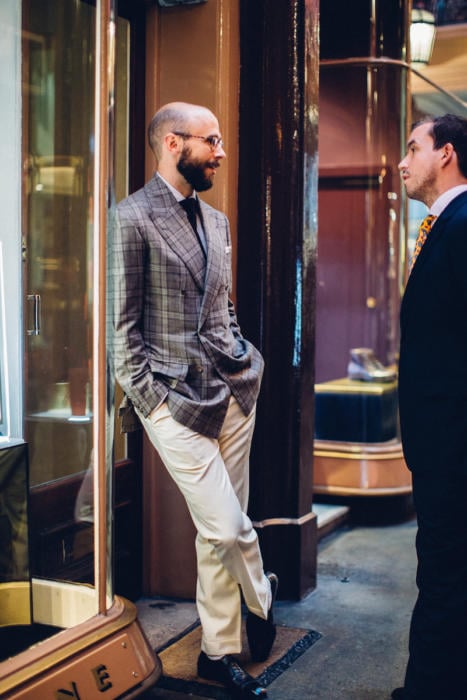 On DBs generally, it is fair to say that most ready-to-wear double-breasted jackets will be less flattering than a single-breasted. This is because they are harder to cut to a standard fit, so are unlikely to fit as well.

That’s a good reason for having one made bespoke, and if you do there is no reason it shouldn’t be very flattering – whatever your shape. Indeed a RTW one might be as well, if you search long enough and find the right style.

When buying a double-breasted jacket (be it bespoke, MTM or RTW) always consider the position of the waist button and the extent of the overlap – as set out above.

Finally, a large man can wear double-breasted much more easily if he reduces its bulk in every other way, through lack of clutter, texture and excess cloth. In my opinion, large men shouldn’t be scared of a double-breasted suit, and slim men should positively embrace it.

You can follow the discussion on Suit style 3: The double breasted by entering your email address in the box below. You will then receive an email every time a new comment is added. These will also contain a link to a page where you can stop the alerts, and remove all of your related data from the site.

Last reply was 1 month ago
The Guide to Suit Style