The Italian Background: an awkward but persistently useful phrase I coined back in 2008 to describe the tendency of Italians to wear blue shirts and navy ties under strongly coloured suits.

Rather than the English alternative - bright shirts and ties under sober suits.

It was a lesson gleaned from hungrily consuming the street-style images of The Sartorialist, where every man in Milan was slowly riding a bicycle, in a finely pressed suit and a resplendent beard.

Those impressions have mellowed and deepened, particularly as I have got to know some of the people in the photographs. And worked with others that have a rather less showy, more mature style.

However, the simple lesson of the Italian Background remains: a blue shirt and navy tie goes with almost anything, and provides the best foil for strong or brightly coloured tailoring.

The most versatile of all, in my experience, is a plain-blue poplin shirt and large-knot navy-grenadine tie.

But for this tan summer suit from Manning & Manning, I went with a navy tie from Mattabisch (via The Armoury) in a madder-like chalky finish with a green/brown geometrical design.

It is paired with: 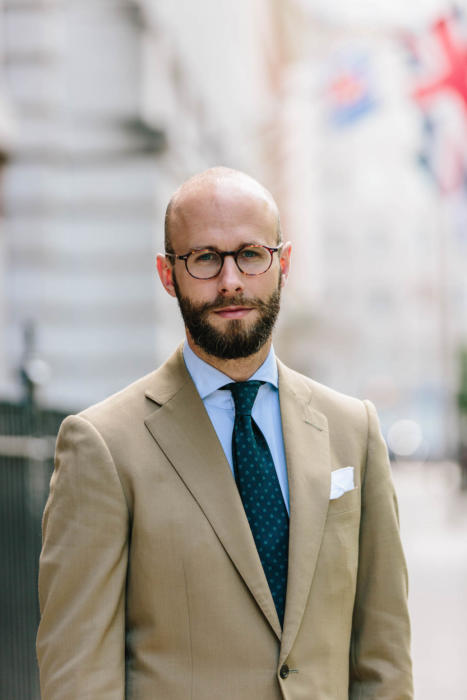 The suit, you may recall, was made by English tailor Bryan Manning - an ex-Kilgour cutter who now works by visiting clients, at the Holland & Sherry rooms on Savile Row and a basement workroom on Tottenham Court Road.

Bryan offers two services - Semi-Bespoke and Full Bespoke - priced at £1000 and £1350 respectively, both inclusive of VAT.

Both are cut by Bryan to a fully bespoke paper pattern, but the former has a fused chest piece and the latter a floating, hand-padded one.

This is the Full Bespoke. We only had one real fitting, with Bryan working closely from try-on jackets (full post on the fitting here), but then made a few alterations to the finished suit when it was ready. So effectively there were two fittings, just with more to be taken apart in between. 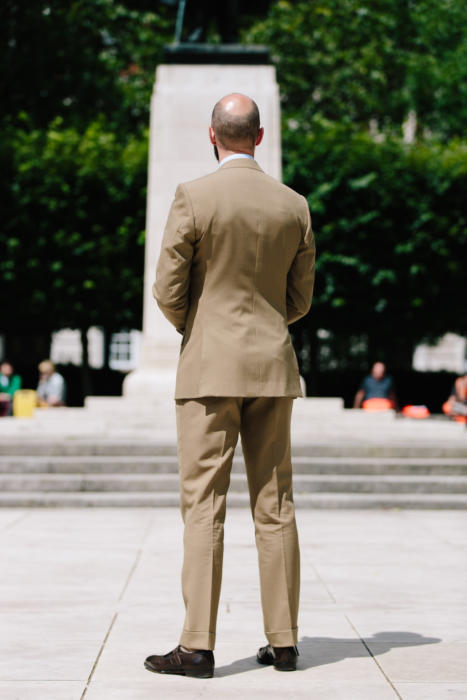 As far as fit goes, the result is pretty good. Close around the neck and shoulders, clean through the top of the back, and nicely shaped through the waist.

Bryan cuts a pretty traditional, strongly shouldered jacket, and you can see the structure around the shoulders in the images above. There's also a fairly large sleevehead and some decent drape in the chest, adding to that effect.

I stick with my earlier impression at the fitting that the jacket is a little short - it would have been better if half an inch longer.

That would have fully covered the seat and balanced better with the strong shoulders. The pockets and buttons on the jacket should also have been moved up to cater for the shorter length.

Both things couldn't really be altered after the first fitting. Not getting them right then is partially my fault, although it is an advantage of more than one fitting. 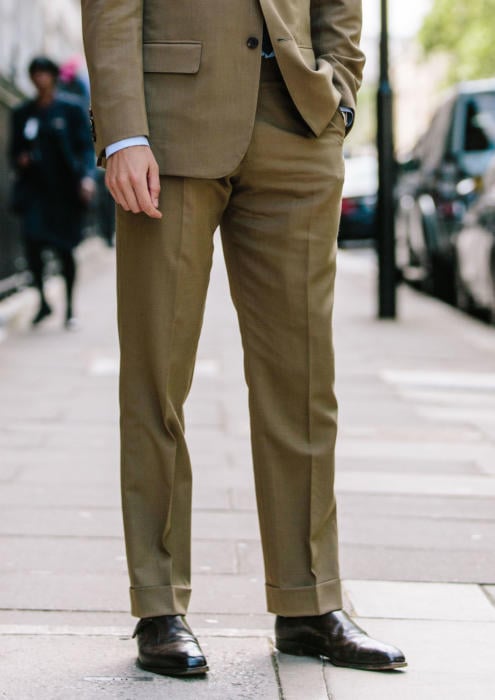 However, as I say the fit overall was good - the wrinkling and falling away on display here is largely due to the very lightweight cloth (Cape Horn, a high-twist wool from Holland & Sherry - not one I'd necessarily use again).

And we got the trousers to a good state after the alterations, with a nice narrow leg.

The finishing, on the other hand, was where the low price was most evident. The buttonholes on the jacket were rather thick (as shown below) and points like the gorge (where the collar joins the lapel) could have been neater. 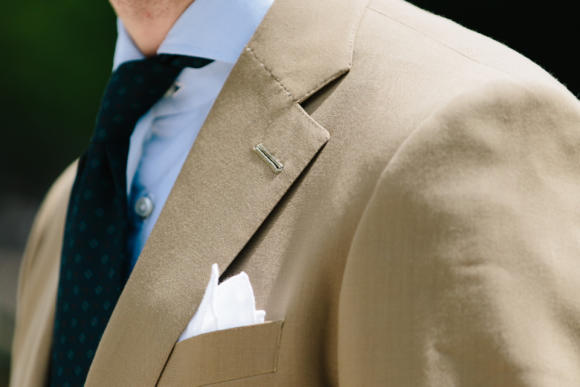 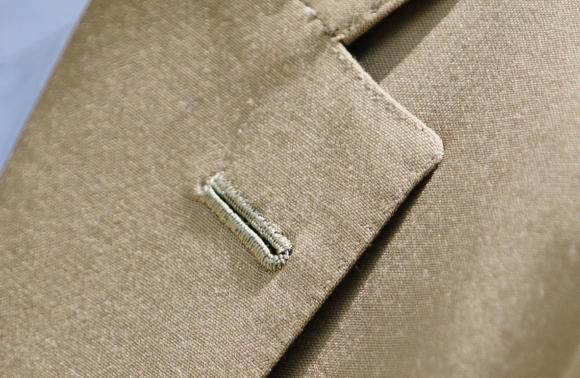 It reminds me of what things like buttonholes used to be like on Graham Browne suits, when I first started using them years ago.

Back then clients didn't really seemed to care about finishing, and it was understandable that they didn't focus too much on it. Nowadays GB have plenty of blog readers going in, who really emphasise such things.

Of course, the difference between Graham Browne and Manning & Manning here is that the canvas is hand-padded, and that is certainly worth paying for. A hand-cut, hand-padded suit for £1350 (even less without the VAT) is incredible value for money. 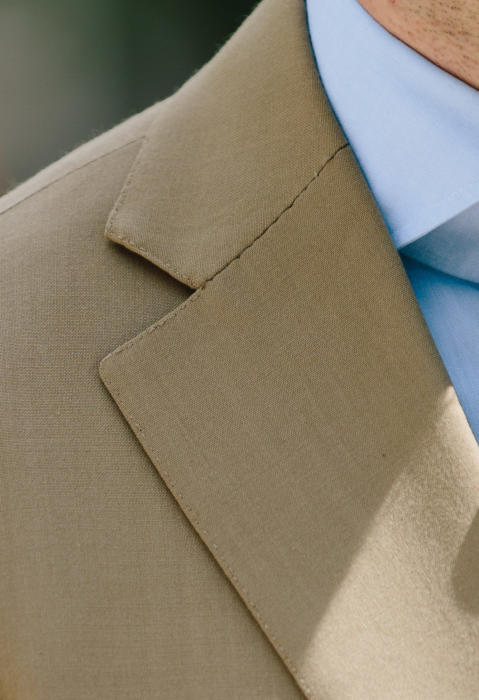 You can follow the discussion on Manning & Manning suit – with an Italian Background by entering your email address in the box below. You will then receive an email every time a new comment is added. These will also contain a link to a page where you can stop the alerts, and remove all of your related data from the site.

Thanks Nick. I'm not sure my old rope-soled ones had rubber in there either, but I guess it's hard to tell. Obviously rubber vs rope sole is a choice governed mostly by other things (for me anyway)

Grey is nice with colour, so perhaps try something like our Madras linen check? Or an oxford in another colour like a pink or yellow. (Pink PS one coming soon)

Thanks RT, very helpful. Probably not for the moment, I'm afraid, as we're just producing this year's run of the plain Escorial Tweed.

Yes, smarter materials like hopsack and cashmere aren't that useful, being smart. But there is a whole world of wools you haven't included there - shetlands, lambswools, tweeds. That's where I would look for a casual winter jacket. I'm afraid I'm not sure on your…