What makes a cloth suitable for a jacket, but not for a suit?

This is a question I know many readers struggle with, particularly as offices become more casual. Without the safety of a dark suit and dark shoes, what should a man wear? Why doesn’t the jacket from that suit just work with other trousers?

It’s about the set

The key is the density of the cloth. A fine worsted wool used for suiting is quite dense, with more yarn per centimetre. This is controlled by the ‘set’ of the loom when the cloth is woven.

A denser cloth is better ‘constructed’, as those in the cloth industry put it. It has more body, and thus can hang and drape better, as well as retaining a crease in a pair of trousers.

Jacketings (cloths used for jackets) tend to be looser in the weave and therefore more malleable. If you pick up a nice navy cashmere jacketing, it will feel spongy and pliable.

A navy suiting, by contrast, will feel like it has a definite shape and direction. It knows where it wants to go, and once you’ve stopped messing around with it, it will return there.

Below: A close up of my particularly loosely woven Permanent Style tweed jacket 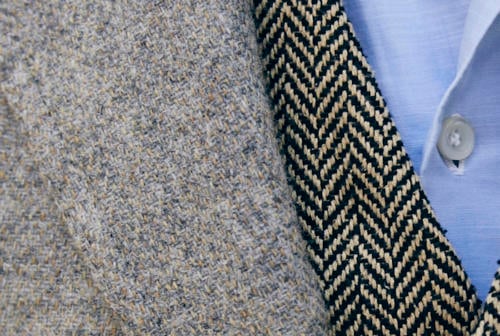 A jacketing is often thought of as soft, but it doesn’t have to be. A navy cashmere and a hairy Shetland are very different in feel, but they both have this loose, pliable feel in common.

Summer jackets are similar. They are often some loosely constructed mixture of linen, silk, and wool. (Indeed, the very fact that they are mixes makes them a little irregular in appearance, and therefore more casual.)

But even if summer jacket is in plain linen, it will usually be a lighter weight if intended for a jacketing and heavier if for a whole suit – with that weight partly down to how densely it has been woven.

The fiber matters too

Now, this doesn’t mean the weaver can make anything into a suiting, as long as the set is right. For something to work as a suiting, it also has to be a relatively long fiber, so it can be spun into a fine yarn.

The vast majority of cashmere fibers are just too short, as are Shetland and Harris wools. It is possible to make suitings out of cashmere, but the fibers have to be particularly long and carefully selected.

You can have densely woven tweeds that are made into shooting suits, for example. But they have to be much heavier and will never have the fineness of a worsted suiting. A tweed like Saxony, meanwhile, uses a finer yarn than Shetland and is still heavier than most suitings.

Below: My cashmere oatmeal-coloured jacket from Elia Caliendo 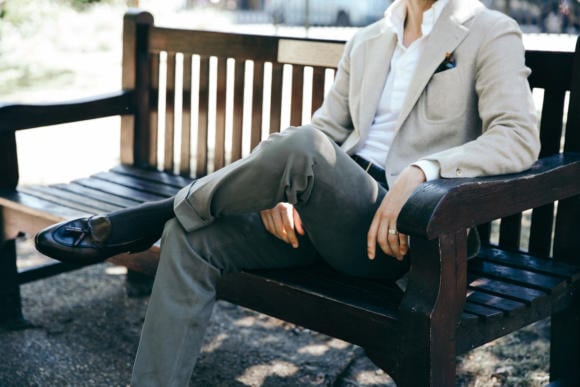 The role of finishing

You could be forgiven for thinking that finishing was a more important factor than density. After all, it is finishing that makes something smooth or rough, sleek or fluffy.

Most jackets do tend to have less of a finish than suits. They are not so ‘clean cut’, with the fibers being left a little longer. But you can also get jackets with a clean, shiny finish. It’s not my taste, but these can be seen as more formal jackets, and they are set apart from suits both by the ‘set’ and by their colour or pattern.

One obvious exception to this is some forms of navy blazer. They are often made from a more densely woven cloth, more similar to a suiting.

This is a question of formality, and is largely a hangover from days when a separate jacket and trousers was still very formal – before the lounge suit began to dominate all smart and professional menswear.

Today, a navy blazer is usually a little less dense. Hopsack, for example, is a style of weave that is often used for a slightly less densely constructed jacket, and makes a more versatile, modern blazer. It also tends to have a less shiny finish.

Below: My hopsack jacket from Elia Caliendo 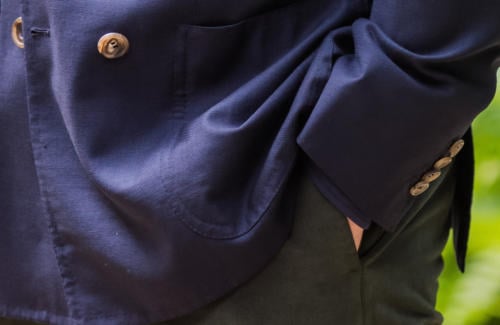 Finally, the colour and pattern of a jacketing usually sets it apart from a suit – although this is far more a question of culture and taste.

Strong colours and bold patterns tend to be used in jackets just because having them in a whole suit would be overwhelming. It wouldn’t be smart enough, and therefore undermine most of what people want out of a suit.

If you’re wearing a separate jacket and trousers, it works best where the two are clearly distinguished from each other.

This can be done in lots of ways (texture, density, material, colour, pattern) but colour and pattern are the easiest. And patterned jackets generally work better than patterned trousers.

Below: My muted-green jacket from Solito, with dark purple overcheck 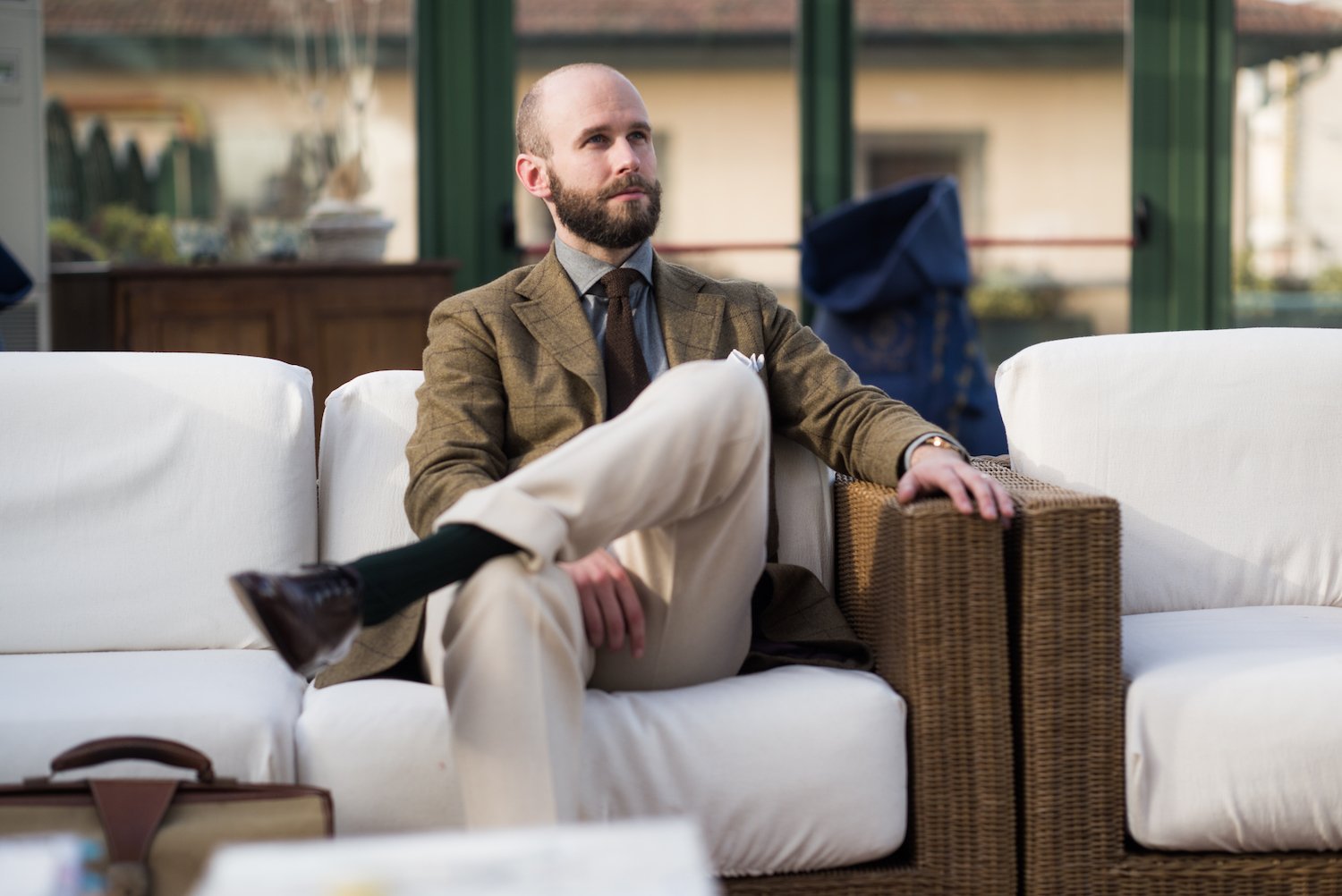 Which colours to pick

As to what styles of jacket and trouser you should combine together, this is perhaps harder and certainly more subjective than what cloth should be used as a jacketing.

But some general guidelines are possible. Here are my five quick tips, with some links to further reading:

1 Navy is the most versatile colour for a jacket, followed by grey and pale browns (sand/oatmeal). It very rarely works as an odd trouser.

2 Green and brown are great jacket colours, but tend to be more rustic and casual. Get them in muted colours if possible.

3 Jeans only work with the most casual of jackets. Think texture, casual colour and a loose set!

4 Greys are the most versatile colour of odd trouser. Mid-grey, light and charcoal probably, in that order

5 Contrast is key. And white or cream are very useful in a trouser if you can get away with them.

You can follow the discussion on The guide to jacketings by entering your email address in the box below. You will then receive an email every time a new comment is added. These will also contain a link to a page where you can stop the alerts, and remove all of your related data from the site.

I think it can work, yes - see my Valstarino shoot here

It is very good, but I personally need to find the style attractive as well. Otherwise there just really isn't enough of a difference between that and the dozens of other tailors covered.

Thanks, sure I'll try and do that in the future. Though height is also very relative to the person remember (so other measurements might be useful in parallel)

Not really, no. Or it would be a deliberately, unconventional look if you did. It's called outerwear for a reason. 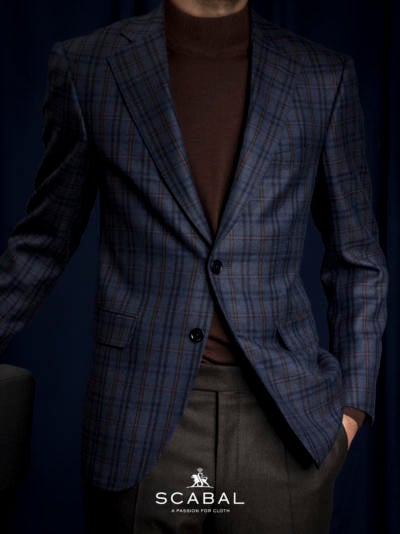 Scabal: ESCAPE
Get out of the ordinary this Autumn/Winter season with Scabal's brand new ESCAPE collection. Composed of two deluxe blends of pure wool and cashmere, it is full of fancy and colourful heavyweight jacketings with a distinctly vintage look. The first part of the collection weighs 320g and is composed of fashionable, softly accented windowpanes and glen checks in dark blues and understated reds, as well as jacquard-style plains full of movement in grey, navy and ice blue. The second part weighs a sturdier 340g, but retains the modern aesthetics of its companion cloth. Glen checks, overchecks, windowpanes and tartan-style designs can be found in lime atop navy, blue atop maroon and various mixtures of grey, green, and even a subdued pink. Click here for more details