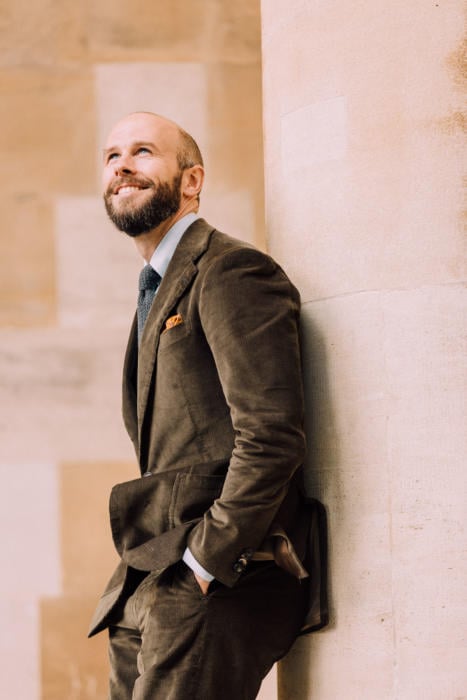 I found it very interesting in our recent capsule suit collection article how many readers mentioned wearing suits casually.

It’s natural to assume that suits are for business. It is how they have been most commonly used in recent decades, after all.

But as business becomes more casual, and men wear fewer suits (even moving to jacket and trousers – fingers crossed!), there will be some that want to save the suit and use it elsewhere.

If you enjoy wearing head-to-toe tailoring in the same material, there’s no reason you can’t do in more casual circumstances. I’d argue it’s harder to do well, but it’s still possible.

Indeed, casualisation might help the suit in some circumstances. It’s a natural step that the lounge suit will gradually replace the dinner jacket as the standard for evening, just as the dinner jacket replaced the tailcoat.

This, then, is a companion piece to that original article: a suggested capsule collection of casual suits. 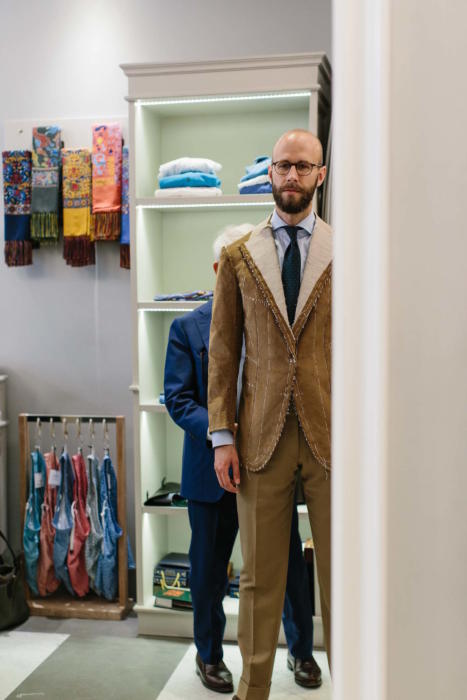 Probably the most versatile material for a casual suit.

Not only can it work as a suit, but both jacket and trousers can usually work separately. There aren’t many materials you can say that for.

My favourite colours are tan or pale brown, and dark green. Personally I don’t think navy works that well, but a warm grey can. And bright colours should usually be restricted to a jacket.

The Pirozzi suit pictured of mine is worn with a tie. I assume, however, that most men wearing a suit casually will do so without a tie.

This is a dangerous area. Suits can easily look incomplete without a tie: the scale of their colour means that having something to close the neck looks more finished and natural. A suit without a tie often looks incomplete, and unbalanced.

But if it’s going to work with any material, it’s a casual one like cotton. And if you’re going to do it I’d recommend adding more elements to the outfit, to replace the tie, whether that’s a handkerchief, a pin, or a cardigan.

One last point on corduroy is that it is going through a ‘moment’ in terms of fashion. It certainly wasn’t fashionable when I was growing up, and may not be in another five years. So perhaps don’t invest too heavily in it. 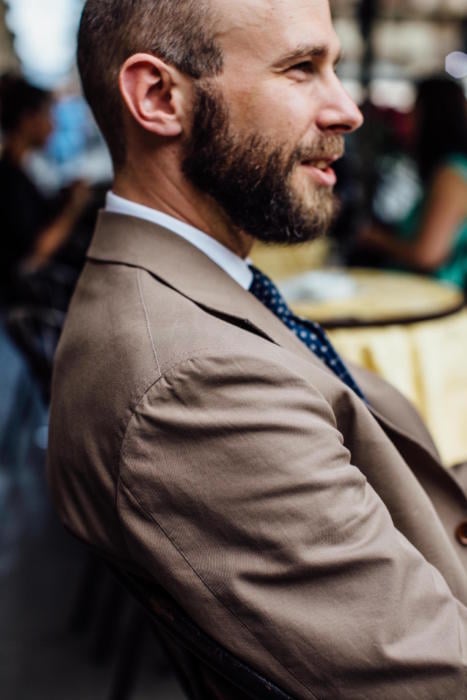 Cottons other than corduroy are also great casually. The way they rumple, fade and wear in just means they look more relaxed than any other tailoring material.

The only downside to these cottons is that they’re less likely to be wearable as separates. A brushed cotton like moleskin can work, for example, but simple cotton gabardines like my one pictured from Elia Caliendo, can struggle.

There are many variations on cotton. Usually they’re a twill weave (for better body and drape) but there are lots of different weights and finishes. Drake’s has done quite a few different ones over the years for example, and I particularly like the Denim cotton bunch from Loro Piana (which I used for both my P Johnson trousers and Saman Amel trousers).

I’d avoid full denim suits though. A jacket in a good denim can look great (see my Cifonelli) but the trousers often let it down. They don’t look like jeans, like just look like tailored indigo cotton. I’ve never worn my Cifonelli as a full suit as a result. 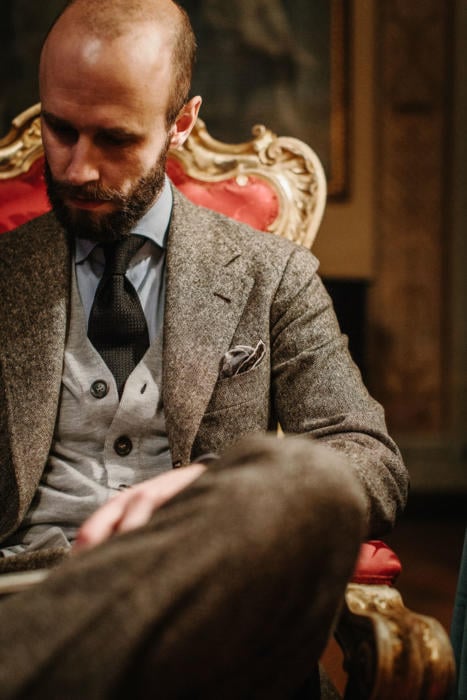 3. Tweed and other wools

If we switch from cotton to wool, any casual wool suit will likely be something approaching tweed – just because that’s what a coarser wool looks like.

The issue with tweed generally is that anything soft enough to make a good jacket will not have enough body to make good trousers. So err on the side of denser, harder-finished tweeds.

I’m in the process of having a grey-herringbone tweed suit made by The Anthology (The SherryTweed bunch) and the trousers look good. But I would never have ordered it if I hadn’t seen it made up on Buzz already.

Tweed is also below cotton on this list because, frankly, I would pretty much always prefer a tweed jacket to a tweed suit. It looks better without a tie and is more versatile.

I hope guys exploring casual suits aren’t doing so because they don’t feel confident combining separate jackets and trousers. By all means wear a casual suit; but make sure you master separates too. It will be more useful.

There are wools other than tweed of course, including some with names (like covert) and some without. Flannel, however, is hard to make work casually. At the very least, it needs to be in a non-business colour, so not dark grey or navy. 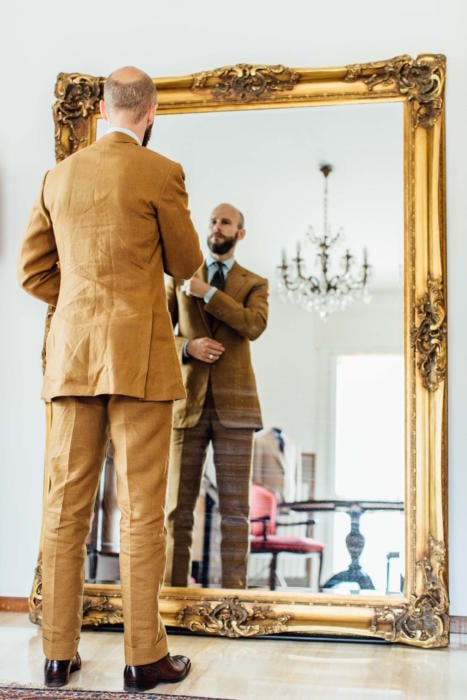 Our third fibre, and only listed fourth because it is limited to warmer months.

Linen is a wonderful material for tailoring – as set out in our linen article in the Guide to Cloth. It’s strong, cool, light in weight and has a distinctive rumpled elegance.

It’s also unlikely to be worn in a business environment, making it a great candidate for a casual suit. It would hardly be worn (and enjoyed) otherwise.

It also feels easier to justify the tieless look with a linen suit in hot weather, along with sockless (or invisible-sock) shoes and perhaps one more shirt button undone.

Linen is best in casual, earthy tones too: tans, greens and browns. Indeed, that applies to all the casual suits so far. Warmer and stronger colours are more casual, and so suit this style of suit.

It probably goes without saying that  casual cut and make helps too. Less structure, less padding, and a soft, rounded cut. Probably Neapolitan. 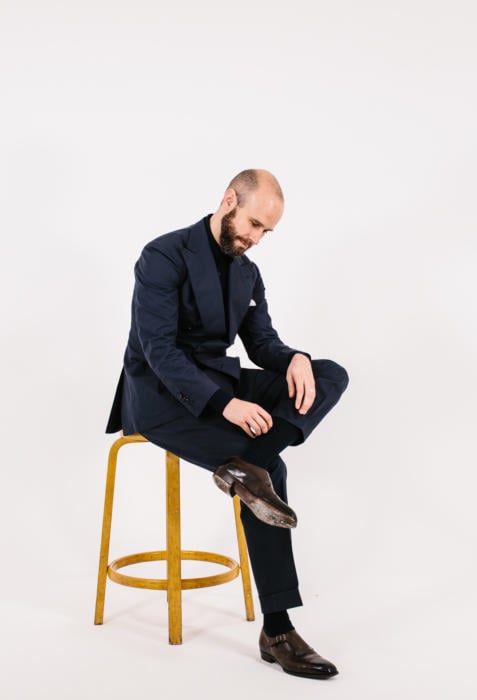 As mentioned in the introduction, in the nineteenth century the dinner jacket gradually replaced the tailcoat for evening wear, just as during the day the lounge suit was replacing the frock coat.

Menswear has been becoming more casual for a long time. Just very slowly.

If fewer people are wearing a suit today, therefore, it would be logical for it to start becoming the standard for formal events, replacing the dinner jacket.

For wonderful as black tie is, there are times when it can seem a little tacky. The fact most dinner jackets are rented is a problem, as are the bastardisations of it worn by waiters. A white DJ looks great until you go to a restaurant and all the serving staff are wearing them.

I think this is a theme we’ll explore in a separate article in the future, but for now suffice it to say that this is an excellent opportunity to wear the suit in another role.

At evening events it is much easier to get away with double-breasted jackets, with waistcoats and with jewellery.

Just remember that the same style principles of black tie apply: colours should still be dark, rich and tonal, with variation coming through cut and texture.

So black linen, perhaps, or even the dark-green linen I’m making a suit with at Gieves & Hawkes (below).

Textural variation through the choice between a shiny satin handkerchief and a matte linen one. Flannel for its texture, just like velvet in a smoking jacket. Something to dress the neck, even if that’s a roll neck or a silk scarf. 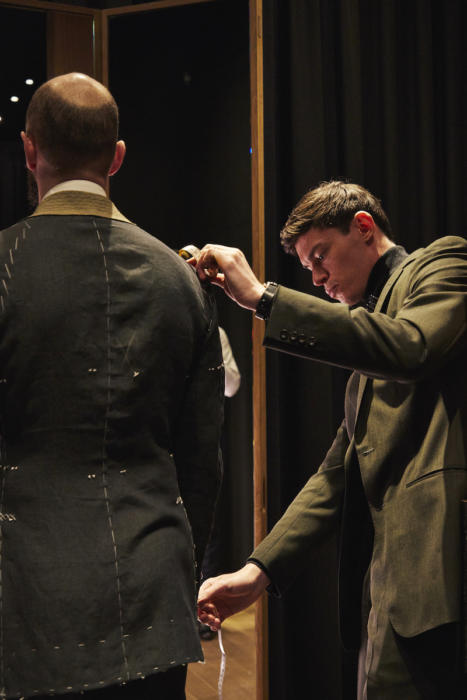 In the end, I think it’s great that people are exploring the idea of a casual suit – worn for pleasure rather than business. It can give tailoring a new lease of life.

But I do think a separate jacket and trousers is the more useful and practical option most of the time – in all the examples above, except perhaps number 5. It can be harder to put together, but a separate jacket is more subtle and more modern.

Hopefully the other posts in this Wardrobe Building series help illustrate that, as well as the posts in the Jackets and Trousers categories.

You can follow the discussion on If you only had five casual suits: A capsule collection by entering your email address in the box below. You will then receive an email every time a new comment is added. These will also contain a link to a page where you can stop the alerts, and remove all of your related data from the site.