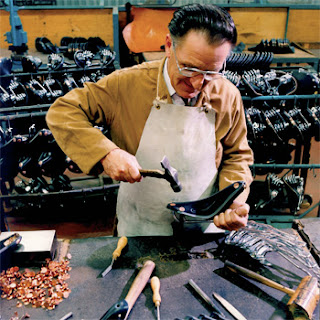 Brooks leather saddles are next in our cycling series. Unsurprisingly, the construction has much in common with benchmade shoes. Old, iron machines, worked by hand and crucial details finished by hand at every point.

The leather saddle is pressed by machine, with the edges worked up by hand around the edges rather like a lasting machine. The copper rivets – used on the more expensive Brooks models – are hammered to the shape of the saddle by hand. The copper rivets have bigger heads, reducing the chance of the leather being exposed as it pulls away from the rivet. But a bigger head has to be rounded to the seat, in order to remain comfortable.

Another aspect done by hand is the chamfering, similar to skiving, where the edge of the saddle is thinned off. Like the hammering, it’s delicate work that can easily ruin a saddle. You can see the production process on a couple of YouTube videos Brooks have made, the first part of which is here.

If you’ve been to Northampton, you’ll instantly see a similarity with the shoemaking factories. Brooks’s springs are made by two machines – one German, from 1954, for the left spring, and one British, from 1949, for the right. Not bad, as heritage goes.

The leather is from a mature cow, rather than calf, and mostly from the butt of the hide. Racing saddles, which use less leather, are cut from nearer the butt as the skin tends to be harder. Upright saddles are cut closer to the middle of the back. 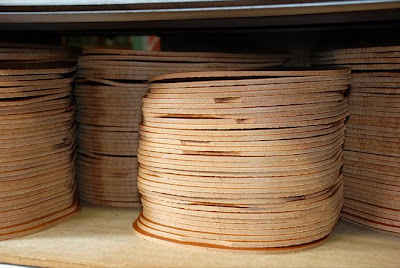 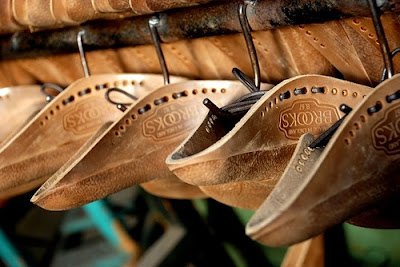 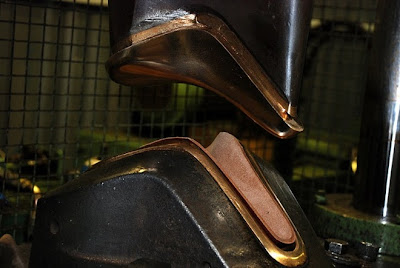 Leather is much harder than foam or gel. When you first sit on a Brooks saddle it feels hard. But that gel is only a thin layer sitting on top of a solid plastic base. A leather saddle, by contrast, has no base at all – it is simply skin suspended within a metal frame. Almost like a leather hammock. So not only will the seat mold to your bum over time, it will soften and allow you to bounce on the leather.

As you’d expect, leather needs feeding and rewards wax-based attention. This is particularly true of the Brooks saddles – it certainly makes a more difference to your comfort than on the upper of a shoe.

A leather saddle will always sacrifice something in weight compared to other racing saddles, but it can actually be lighter than the casual, gel-based versions.

As you can see from the comments on the Brooks website, it has been criticised for making its leather bags in China. The company professes that it can’t find anyone in the UK that can make them to its standards, and has tried several manufacturers. Apparently that may finally be in the process of being solved, with new canvas bags and the D-shape saddle bag (my personal favourite) coming back to production in the UK.

And while we’re talking about Brooks, check out the cycling jacket being made for them with Timothy Everest, here. Pretty stylish and made with ventile (silent, cotton-based waterproof, mentioned here previously in an Albam post).

This is something I know quite a bit about from a user’s perspective. Here in the Netherlands there is a large market for Brooks saddles, considered the ultimate in cycling style.
I’d estimate that there is one Brooks saddle in evidence per 4-5 bicycles, and with a lot of bicycles here that’s a lot of saddles.They often sit atop vintage cycles and even newer ones in the vintage designs.
Horrifyingly it’s also possible to come across Brooks saddles left out in the rain and sun until they resemble a well-done pork chop on a frame. I use a substance that looks like goose fat to nourish the leather

Mine sits on an old British BSA bicycle produced around 1957, before their cycle manufacturing division was acquired by Raleigh.

Thanks for the memories!
Fondly remembering my youthful days riding a Raleigh bike with Brooks seat. (Both made in ENGLAND, thank you very much!!!)

How’s the guy’s hair so shiny? Does he gel it everyday? What sort of product can a gentlemen use every day to get this shine?

I have Brooks B.17 with copper rivets on my Randonneur bicycle. Nothing, and I mean nothing, is more comfortable after 200km of cycling. It also has achieved a nice patina after many years of service. Use mudguards and a saddle cover in the rain, let things dry in a warm but not hot environment and apply “Proof Hide” or other leather-saddle specific cream once-a-year and your saddle will last as long as your Alfred Sargents.