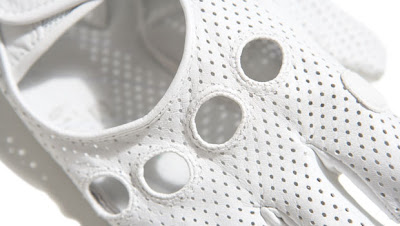 Given my recent trip to Dent’s to see gloves being made there, it was interesting to learn about how the glove making process is adapted to sports gloves – like those made by Rapha for cycling.

Unlike a dress glove, sports gloves have to be resistant to moisture – mostly perspiration, rather than rain – as otherwise the repeated drying out of the leather will remove the skin’s natural moisture and make it crack. The salts in your sweat exacerbate the effect.

Cycling gloves come under huge amounts of strain, certainly more than the other sports leather gloves are often employed for, such as golf, baseball or cricket. So they have to be treated to be both water resistant and toughened to deal with continual tension. This is done partly in the dyeing of the leather and partly in the drying and finishing. (Currently all done by Pittards down in Yeovil, Somerset. See detail on the process here.)

Rapha was one of the first companies to bring leather driving gloves back to the market, around five years ago, since their heyday in the fifties and sixties. Since then a lot more companies have started producing their own models, and it’s interesting to see how Rapha has been forced to up its game.

For example, the two models where this treated leather is most important are the Grand Tour glove (fashioned and perforated after a driving glove) and the leather town glove (with long fingers and lined). The former is made out of goatskin at the moment and the latter out of hairsheep.

As more companies started making gloves in goatskin, Rapha looked to upgrade its material and from Spring 2012 the Grand Tour gloves will be made out of hairsheep leather as well. 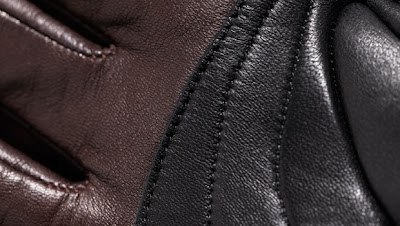 Hairsheep is a breed of sheep found in Africa, primarily Ethiopia, whose fleece is hair rather than wool as it is cooler in the heat. It is often used on military gloves, because it is thin and easier to wear when operating arms or machinery. Which segues nicely into another aspect of Rapha’s town glove (above): the foam used in the padding of the palm (crucial in anything used on a road bike, where so much impact goes through your hands and wrists) was used because it is the same material used on sniper’s gloves, to absorb the recoil of the gun.

“We specifically sought out that foam because of its effectiveness in absorbing shock, which is due to how tightly it is made,” says Simon Huntsman, product manager at Rapha.

I’ve had the town gloves for a couple of months now and I can see how well they are and will mold to my hands. They are sitting on the window sill, looking for all the world as if there was a hand in them, given the way the thumb stays raised and the palm full. Few things do that, retaining the shape of your body so well that they stand up in that shape. My leather Belstaff jacket is one, my Equus bridle leather belt another.

As you can see from the picture of a worn pair below, the Grand Tour gloves mould just as well. 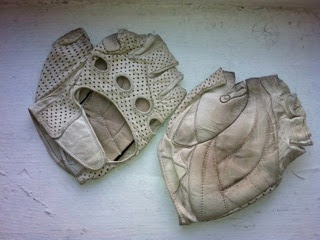 I own both of these gloves for my daily commute, and although the Grand Tour gloves have seen little use so far because of the cold weather, I can only genuinely vouch as to the quality of the leather town gloves. They’re holding up wonderfully after a winter of use, and still look amazing.