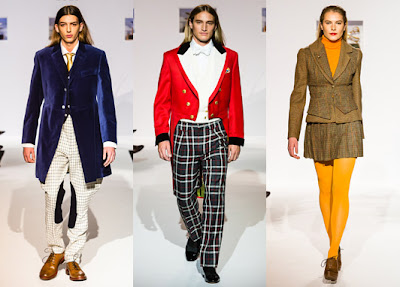 The Golden Shears was held last night – the closest thing we get to a tailoring competition.
It’s not really a tailoring competition, in many respects. Everyone makes to a standard size (40 chest, 36 waist) to a fit a mannequin, so bespoke cutting isn’t really tested. Some of the competitors from the fashion schools make the pieces with very little hand work, so the tailoring isn’t universally strong. And half the points are awarded by celebrity judges – last night, Joanna Lumley, Raymond Blanc and others.
No, it’s definitely more fashion, and even then you could ask what most of the judges know about fashion. Most of the mainstream coverage focused on the fact that the winners were all girls, but then the last winner was a girl as well – there are simply more of them studying fashion and apprenticing to be coatmakers.
I was a little surprised that women’s outfits didn’t dominate the awards (only the rising star award was a woman’s piece, far right, winner far left), for the standard block clearly favours the female models. Their pieces all fitted well, whereas the male models barely had a 38 chest between them, and so always looked swamped in their size 40s.
All that being said, it was a charming evening, as ever hovering somewhere between school prize-giving and college catwalk. You can’t help but smile when each apprentice is beaming from ear to ear, revelling in the attention on their hard secluded labour.

The lady looks lovely but those two gents look absolutely clownish, the fellow on the left quite literally so. I’m sort of vaguely horrified.

Though it is nice to know that I have the same proportions as the Golden Shears mannequin.