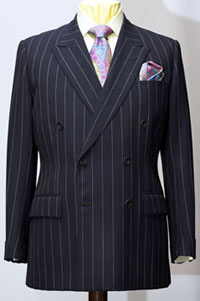 I was always told that a double-breasted suit created breadth. Good for tall, narrow men. Not so good for the short and stout. This belief, though widely held by others, probably originates for me with the insistence of my mother that I would look lovely with a double breast, given that I am tall and could always be broader.

Funny how many opinions of oneself originate with such memories of youth. There’s probably a good case to be made that all one’s fundamental impressions of strength and weakness are formed at that age. When one is more insecure, more vulnerable. I’ve never liked my legs either.

But I digress. The traditional view is that double-breasted makes one broader. Alan Flusser

disagrees: he contends that the swooping lapels of a double-breasted jacket, from the tip of a peaked lapel down to two crossed points at the waist, create the illusion of height. This illusion, he argues, more than compensates for the impression of breadth achieved elsewhere.

I can see the sense in his argument, but instinctively disagree. I knew he was wrong, but didn’t know why.

Now I do. Flusser is not wrong in his analysis, just in his conclusion. The answer is spelled out in The Suit

by Nicholas Antongiavanni. His chapter Of Diminutive Men agrees that the sweeping lapel of a double-breasted jacket creates height. The double row of buttons and the extra flap of cloth, however, create breadth. Most would argue that the second set of features outweighs the first. But to a certain extent that is a subjective question.

More importantly, there is a solution for the diminutive man. If he wears a single-breasted suit with a low fastening (perhaps even a single button on the waist as preferred by some Savile Row tailors) and peaked lapels, he can achieve some of the slimming effects of a double-breasted jacket. This look, Antongiavanni argues, is rakish. It is unusual and slimming without the conservative or perhaps boxy appearance of the normal double-breasted.

The other solution is to go for a double-breasted suit with just two buttons, as was the model I had made in Hong Kong recently. While I have seen this design around occasionally over the years, it was most recently in the spotlight in Dunhill’s spring/summer campaign. Here a two-button double-breasted suit was used as a separate jacket with dark jeans and dark-brown derbys (not sure I quite agree with this look – a double-breasted looking rather out of place as an odd jacket – but it did seem to work on the fellow in the advert) and as a modern twist on a white linen suit worn by Jude Law.

Getting rid of the double row of buttons helps avoid the boxy look wonderfully. There is, obviously, now a single horizontal line across one’s waist, but it is at least a slim line. It all helps accentuate my breadth and ease those youthful insecurities.

Quote: “More importantly, there is a solution for the diminutive man. If he wears a single-breasted suit with a low fastening (perhaps even a single button […]) and peaked lapels, he can achieve some of the slimming effects of a double-breasted jacket.” ***
Considering that opinion there is just one very important jacket often made in the described style: the single-breasted one-button dinner jacket with peaked lapels. Plus, obeying traditional rules, it has besom pockets, too. Just all-perfect for the small and/or heavy man.

When deciding if I should invest in a DB suit/jacket, what size categories (small/large, stocky/slim) would you suggest I, a man of 1m 73 (5′ 8″) and 68 Kg consider myself?

If you’re shorter and slim like that, you’ll tend to want one that’s neater (so smaller) and with a longer lapel if possible. See this article on how DBs change the way someone looks.