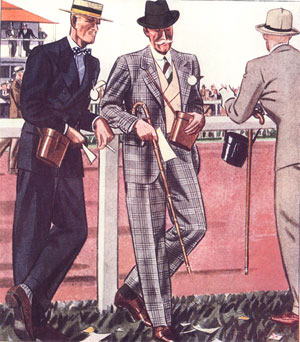 It’s always nice when fashion coincides with personal taste. Makes you feel like the whole world is coming around to your way of thinking. Waistcoats are current example.

Patterned waistcoats are an abomination, unless you’re going to the races. And even then you’d be better off in smart three-piece tails. (Perhaps in pale grey, to set oneself apart.)

Waistcoats, equally, need to fit well. If your trousers are worn on the hips, as most are today, the waistcoat must be long-fitting. No shirt material should ever be exposed between waistcoat and trousers. For that reason and because of the unsightly bulge, belts should also be avoided.

Lastly, waistcoats should if possible be made to measure. They are the hardest piece of clothing for a tailor to make and ready-to-wear will rarely fit well. To illustrate: I recently had a suit made by my tailor in Hong Kong, the first I have had from him without a fitting out there first. I was pleased with the result, but he refused to make a waistcoat in this way, remotely, without being able to see it on me and adjust it accordingly. Good for him and his principles. He’ll have to wait until I am out there in November to make the third piece in the three piece.

That waistcoat will be double-breasted. And this is the central point of this posting. Double-breasted waistcoats are not just for weddings, white tie or the whimsical. They are a regular alternative in the three-piece suit, and to my eye always look cleaner and smarter. The long row of buttons up the front of a single-breasted waistcoat can look rather bulky, and lead to a rather high, 1960s-style fastening.

The double-breasted waistcoat, by contrast, has a low, sweeping line that creates a clean V behind the jacket front. There is no cluttering of buttons.

Even though the height of a waistcoat should be no more than an inch (probably a single button) above the top button of the jacket, the prevalence of three-button jackets means that in reality two or three will be exposed – as usually only the jacket’s central, waist button will be fastened.

One or two-button jackets will permit waistcoats with deeper Vs and therefore fewer buttons, but the ratio between jacket and waistcoat buttons is likely to be even more disproportionate (one to three, say, rather than three to five).

Colour and material, of course, are paramount. A double-breasted waistcoat is unusual and should be done in plain (usual) tones and wools. I’d recommend dark grey worsted, navy being a little dressier.

Given the recommendations of The Waistcoat Theory (see previous postings), there is a good chance this waistcoat will end up being worn without its jacket, which is all the more reason why it should be able to shine on its own. And we wouldn’t want to be too fashionable, would we?

Actually, I quite like the appearance of a a single-breasted waistcoat, or vest, lest this American be regaled for pretentious faux-internationalism. But comparing the five-button to the four button vests I have, I prefer the four button, it’s more flattering. But as for bulk, It seems to me that my newer vests, particularly the worsteds, take some time to break in, whereas the linen vests were much soft from the get-go.

Additionally, I feel that a vest should fit snugly without having to tighten the back: while tightening the back can produce some interesting lines there, it should not be so much that it appears skirt-like.

As for patterns: there was a recent GQ spread with a model wearing a white Prince of Wales style check/plaid which due to its monochromatic nature seemed quite smart. Do you feel that a vest patterned to match slack or the rest of a suit is too much and that a vest should always contrast the rest of the outfit? Does this fit into your definition of ‘costume’? I am curious about your thoughts.

As always, yours is a fabulous blog, especially for those of us who are a bit younger and more contemporary in our interpretations of classic style.

Back in the 80s, I wore a vest with a blue blazer and open collared shirt. Just recently I’ve started the waistcoat again thanks to Saks Off Fifth. I picked up three Favourbrook waistcoats knocked down from $495 to $246 to $159 and finally to $47.97.

I’m wearing one now. Lilac with mother mother of pearl buttons, it is something to behold for forty seven bucks. The best part about a vest is you never have to throw away a dress shirt with a stain that the vest can cover.

The DB vest is sooo British. I’m afraid I’ll be shot for wearing this vest much less a DB.

Arctic and Tintin,
The whole of the blog here refers to vests that match the jacket and pants, being part of a three-suit. There is, however, much to be said regarding odd waistcoats. I will make it the subject of a post later this week.

A favorite type of odd waist-coats for Grandfather to wear, were his morning wear dove gray (usually with a tinge of lilac or pink to them), or buff waist-coats. I always favored the dove gray ones with blue suits, and the buff ones with any other colored suit such as any gray or brown save pale washed out browns which really aren’t suited to that type of waist-coat accompaniment anyway. The double breasted buff waist-coat with low slung fish mouth lapels was a personal favorite with nearly every suit in his closet, particularly his chestnut brown flannel chalk stripe and mahogany brown and black hounds-tooth check Shetland wool suit, though it also look handsome with a charcoal brown peak lapelled SB sack lounge suit with droopy peaked lapels – that one had ancient madder lining in geometric neats in olive and gold on a field of muddy maroon. I wish most of his older stuff like that fit me. He had a tiny waist when he was younger.

I enjoyed this article and discussion, Simon. Thank you for your outstanding site! 🙂

Good one.
Very useful stuff..
Thanks for posting.
Work from home

I still love them, yes, though of course only with high-waisted trousers.

I wouldn’t sweat it too much though – the SB waistcoat will look great too, and it wouldn’t be unbalanced with a single button coat