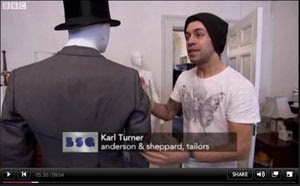 Men’s style appears to be a hot topic over at Broadcasting House. The BBC recently showed its second menswear-related series in as many months, with the original series on Savile Row being followed up by one called British Style Genius.

The overlap with the previous series was obvious, with the same narrator and the initial section of the first episode following the same Savile Row exhibition, as it moved from Pitti Uomo to the British embassy in Tokyo.

But gone was the comedy of Henry Poole in China (with its odd reminders of an episode of The Office). Instead, this was a serious look at the history and development of men’s style. According to them, men’s style can be defined by two twin concepts: propriety and eccentricity.

Every man has a sense of what is right for the right occasion, and this has driven much of the sense of buttoned-up formality associated with the British. But on the other hand, every style-conscious British male has an urge to experiment, to undermine tradition with a touch of fun and sarcasm.

Paul Smith sums this up best. Both because his clothes have always been propriety with a twist, mixing great tailoring with different buttons, linings and colours, and because he summed up the British approach in the best quote of the episode:

“People always say ‘why do British men dress so poorly when other nations, like the Italians, dress so well?’ Well, the Italians do dress well. But they also dress identically. They all look stylish but they all look the same. I’d rather have the British eccentricity and humour any day.”

Smith was the epitome of this style as he flounced around in front of an audience of ecstatic Japanese fans. He is the biggest selling European brand in Japan, did you know that? None of your Gucci or Armani; it’s Paul Smith they love.

Smith played with a varied array of props and projections onstage, and told stories of his early career, when he would get out train sets and other toys in meetings, claiming to be bored. “It always broke the ice and make people laugh,” he said.

In a recent post I referred to Paul Smith’s buttons and linings as gimmicks. And this programme didn’t change my mind: I am still more personally interested in tailoring innovation, in how fabrics, linings and padding are manipulated to make subtly different garments. But you can’t help but be impressed by Smith’s energy, inventiveness and business acumen.

This episode (A Cut Above – The Tailored Look) and the second in the series are now available on BBC iPlayer. Unfortunately, I believe this is only accessible to UK residents.

Paul Smith is quite popular among the moneyed class in Seoul as well, though it’s clear that a strong taste for propriety and the more somber lines of Armani and Prada are no less successful. I’d love travel to Tokyo soon to see what it’s like there firsthand. Have you been? I seem to recall reading about a Japanese style magazine which was as well arranged as the Esquire book you reviewed, in spite of being written in a different language.

Belive me I live in Italy and if Italians dress well who dresses bad=the Poles? Thats a myth. Its true they dress identically but they ain’t Jake Gitts by any stretch of the imagination