One sure sign that a tailor knows what he is doing is how he reacts to innovation. Granted, many houses have their own particular style and justly stick to what they know. But for smaller tailors with less tradition in a speciality, it is always interesting to see they react to making something a little bit different.

Thankfully, Edward Tam reacted manfully to my Norfolk Blazer and double-breasted waistcoat requests. He was a little unsure on the belt, as he had never made one in wool before, and suggested that a single pleat in the middle of the jacket’s back might work better than two at the side.

But a few specifications on the former allayed his fears (a two-inch width, it turns out, was what I was thinking of) and I was happy to acquiesce to his suggestions on the former – in his experience a classic bi-swing back often remains stubbornly open a lot of the time, no doubt due to the fact that modern man is so often reaching for his computer’s keyboard. 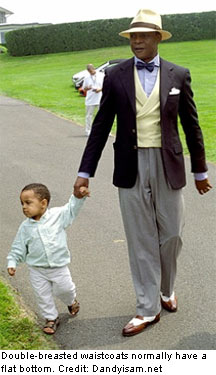 My inspiration for the double-breasted waistcoat was taken from a recent Brioni model, and featured vertical points on both sides of the vest at their extreme corners, so that the line from the buttons went straight down to a point, before angling up again. As a result, the waistcoat has two points exposed when it is done up, with the rear flap of cloth peeking out below the front flap – much like the pointed finish that a single-breasted waistcoat has.

Double-breasted waistcoats nearly always have a clean, horizontal line to them at the front – something confirmed by Edward’s book of classic style illustrations. So he was a little unsure about this modern take, but again thought he could reproduce the look and had an intense conversation with his studio about it (in Cantonese, unfortunately).

This contrasts with Edward’s unswerving insistence that my waistcoat had to be made when I was in Hong Kong, so that it could have at least one fitting. I commented on this a few months ago and it supported something Flusser has written, about how hard it is to tailor a waistcoat, given that it needs to be snug to the body yet retain freedom of movement.

So Edward is not one to accede to a customer’s demands not matter what. He has his principles but he’s willing to give my bizarre creations a go.

The final fitting is this afternoon. I’m almost too excited to write proprely.