Ok, I’ve written about this before. But it deserves a second mention – largely because I bought my fifth pair of shoes in as many years there yesterday.

It is the Paul Smith sale shop. Located on Avery Row, just off a Bond Street tributary. Sells many items made by Mr Smith (suits, socks, shirts). But most impressively has a constant turnover of great shoes with 40% to 60% off.

You wouldn’t think that would happen with a sale shop. After all, its function is to take the dross that didn’t sell in the main store before the end of the season and recover as much profit as possible. When things don’t sell here, they have to be binned – so there is a steep incentive to try and recover your costs at least.

There isn’t always a great selection. Over the summer there was an alarming proliferation of leather sandals in the Paul Smith stripes. Which didn’t shift for months.

But pop in there when you are near Bond Street and I reckon every second or third visit will find you sorely tempted.

Last time I wrote about the store, I had just bought a pair of red “dip dye” suede brogues. They were lovely. All season I had watched that dip-dye range sit mockingly in Selfridge’s, daring me to spend over £250 on craftsmanship that doesn’t realistically match the great Northampton cordwainers they parade alongside.

Then, two months into the next season, a wave of the red suede numbers dropped into the sale store. It would seem red suede was the least popular of the permutations, yet they were my favourites.

But many of the shoes I have bought there have not been unusual. Chocolate wing-tips, for instance, and tan suede boots. The range of shoes and the sizes available is often impressive.

Particularly compared to a recent incarnation of the Paul Smith sale shop, which opened in the Royal Exchange in London. What was originally a straight Paul Smith store turned into a sale shop, but stocking an unusually limited range. All the shoes come in just one or two sizes, often seven for a man. (Which is usually a sign that the products are ex-display rather than ex-store, as display products are nearly always size seven – apparently it is the most aesthetically satisfying, for all you size sevens out there.) 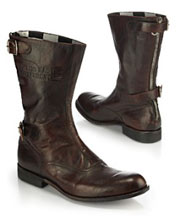 Which brings me to the reason my enthusiasm was ignited anew. I had been looking for some practical boots, particularly with the prospect of Christmas in the country and lots of long Dorset walks. Something rubber-soled, possibly calf-length, nice hard-working leather.

And I found them yesterday in the sale shop, in the shape of Paul Smith’s collaboration he did with Triumph motorcycles. They’re slightly different to the model shown, being lower and not having the checkerboad pattern on the inside. But boy were they great value.

Go now. And watch out for the brown snakeskin oxfords.

Simon,
I do not know how I could have missed this one, those boots you have selected are fantastic. I will have to re-visit their site.
Best,
Nicola

Hi there, I saw your blog on halfway decent suits. I used to go to Kilgour and get their 800 quid made-in-China “bespoke” ones, but I am not sure about whether they really suit me. I popped into Oswald Boetang today and they seemd pretty good quality — who would you recommend for a decent semi-bespoke (under 1500 quid?) suit in London? is it possible to even get a bespoke suit for that kind of figure? I am sure there are some great tailors that just happen not to be on Saville Row. Thanks!

But you should also try and get full bespoke if you can, and again this is possible below £1500. The tailor I have profiled recently, Graham Browne, does full bespoke from £850 and up. Other names that have been suggested to me (but which I haven’t tried) are Lawrence Highman, Thresher & Glenny, Conach & Hoskin and Castle’s.

Have a search around and see what these guys offer. I would stay away from Boateng unless you love the designs so much you are willing to pay a lot of money for them.

I’ve got an Italian tailor as good asanyone anywhere but very problematical as regards his temper.That was until I head butted him after he kept me waiting 3 months for my suit.Now we’re best of friends. I buy material from the Czech Republic (very good) or from the UK. I take it to thi Tailor and he makes it up for 300 quid. Its as good as they come . Strange though because the last two suits I got from him were D.B’s and looed great but I didn’t see anyone else in this supposedly well dressed country looking as cool as that. The Tailor is in the Salento where I have my holiday home. If anyones down that way use him.Ask for address

how much were they Si

Hi Simon,I was fortunate enough to have worked in the Paul Smith sale shop in Avery Row about 8 yrs ago and took full advantage of the discount we received on top of the sale price.Needless to say when they purchased one of the shoe factories that made some of there shoes they had to buy all of the stock in it.A big shoe sale followed and I found myself with a great shoe collection for next to nothing.
Nice work Simon great site