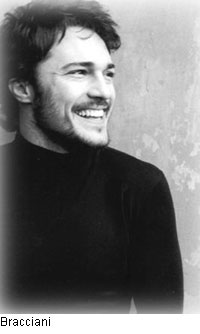 Ever wondered why your Dolce & Gabbana jacket fits you so well but the Gucci just isn’t right? Well, it’s Antonio Bracciani’s fault.

Bracciani is not a designer, a marketer or a manager. He is a fit model. And most of the clothes in the retail collections of Gucci, Prada, Burberry, Z Zegna and Calvin Klein Collection have been made to fit his body. Not yours, not mine, but his.

These proportions are scaled up to the various chest and waist sizes used to classify jackets and trousers. So the precise measurements are less important than the ratios – if you are that little bit bigger than Antonio in every area, the suit might still fit you perfectly.

Antonio has kept the same figure he had when he was 18, through a steady diet and exercise regime. He spends most of his working days standing very still, having clothes fitted on him for hours on end. A slightly unusual occupation, but one that leaves plenty of time for planning his future – setting up an agency for fit models and other unsung jobs in the industry, like pattern cutters. Because you’re not going to stay the same size forever. (Although Armani’s current fit model is 55-years old – Antonio is only 32.)

Antonio is interviewed in the Spring/Summer 2009 edition of Fantastic Man, which has the best quality of writing of any of the men’s quarterly/bi-annual titles. Unfortunately, little of it is about style, but at least the journalism is good. And the piece in question was by Charlie Porter, probably the most consistently worth reading of British style writers.

The Seasonals section at the back of the magazine, however, deserves mention for other reasons. It is normally an insightful look at the various clothes and accessories that could make up an outfit for the season. This time the model wears tight, mid-thigh denim shorts, with a skin-coloured vest tucked in. Over the top is a cream sweater with a slashed neck and hemline that stops way short of the belly button. Finish it off with a white, shapeless Mac. Apparently.

Your post this morning has me a bit taken aback on two counts. As all men’s collections use fit models, I do not understand your point in singling out Antonio Bracciani? What is the point of this? What exactly is his (as you put it) “fault” that he did his job? If you see any “fault” in sizing at these collections then I think that issue needs to be addressed to the employers at the various lines mentioned, not the fit model employed. In addition, I have to disagree with you, where you wrote “Fantastic Man, which has the best quality of writing of any of the men’s quarterly/bi-annual titles. Unfortunately, little of it is about style, but at least the journalism is good.” You have me shaking my head here. I do not understand your position that “little of it is about style,” in my view, Fantastic Man is all style.

Having worked in the garment industry for over 35 years as a fashion designer, patternmaker and technical designer in both the men’s and women’s markets, I can tell you that it is NOT the model that dictates the fit of the garment. The live model is used as a tool to fit the garments. Every company that I have worked for tries garments on both the approved standard dress form (that meets the company’s size measurements) and a live model (again that meets the company’s size measurements).

Clothing companies do intensive research and studies for the fit of their clothes. There are several consulting companies that do nothing but research on the size demographics of the consumer. Alvanon has done some outstanding market research on the sizing trend of the consumer (both male and female) by age and by body shape. This information is used along with the sales figures of what sizes are selling and your company’s market research on the actual consumer that is buying the product. The “standard fit/sizing” of the clothing is what brings customers back–so changes to the “approved standard” in most companies is a huge discussion and is something that is not taken lightly. (We are not talking about seasonal fit changes due to styling.)

“Styling” fit of a garment changes, just like the silhouette, fabric and color. Some seasons the fit is tighter, shorter and other times it is looser, longer. The fit depends on what look the designer and the merchandiser are trying to create. What doesn’t change is the body that you are fitting on–that is the approved standard signed off by the company management, designers, merchandisers, marketing and sales.

As a technical designer we would review garments from our competitors–analyze and compare the fit, workmanship and quality of these garments against what we were making. Then the garments would be tried on both the dress forms and the live models. We would discuss the fit of the “bought samples” and compare them with our product with the design and merchandising teams. If a competitor’s fit was found to be better, then we would create a specification of that garment to be used in the development of new product. Many times the garment would be sent to our overseas office and they would have it “knocked-off” for fit and it would be returned with a new fit sample. This would be especially true, for example, with a great fitting pair of pants.

Live fit models must keep their body shape and weight. They are constantly measured to make sure that they meet the company’s standards. The model’s body type is checked to make sure it fits the into the sizing of the garments. You would not use a 20 something model if your customer base is in the 45-60 year old group.

My only reason in singling out Bracciani is that I happen to have read about him.

Of course it is not his fault – this is poking fun, not blaming the man for being a certain size.

And Russell, thank you very much for all your information, that is very useful. As just mentioned, of course it is the people that pick the models (and all the other aspects that go into fitting and researching fit) that determines the shape of garments.

Lastly Nicola – I should have been more specific. Little of Fantastic Man is about clothes and men’s style in that sense.

Thank you both
Simon

Simon in a previous post (over 12 months ago now) you described something as killing you.

You are clearly still alive and I can therefore only assume you wilfully attempted to mislead.

Please take care in your writing, the Literal Army is huge.