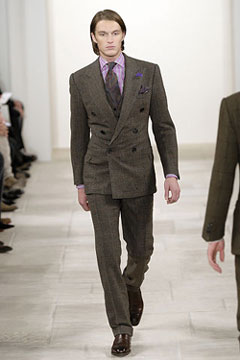 I read a discussion recently between sartorialists on whether a double-breasted suit should have cuffs on the trousers or not. Of course there were some declarations about it being a rule that they should, but as with all rules they are subjective and vary geographically. The important thing is to understand the reason behind the rule.

[If you haven’t read them already, you can hear my views on similar rules such as wearing brown in town, white after Labor Day and trousers without a break.]

Having trouser cuffs fits the aesthetic and tradition of a double-breasted suit; it creates harmony. Not having cuffs balances this tradition with something cleaner and more modern; it creates equilibrium. It’s up to you which you want.

And, as with many questions of style, how an outfit is perceived (by either lay or stylish men) is central to its success, whether people admit it or not. A trend is merely a question of mass perception, and propriety, after all. Even if that trend lasts 20 years.

A double-breasted suit is also more bulky than a single-breasted suit and less flattering for shorter or broader men. This is not a question of perception. It is rational: the more horizontal lines and breaks in the material there are, the more the impression of height is lost.

So the question of whether to have trouser cuffs with your double-breasted suit (or which one to buy, for those without access to bespoke) could be rephrased as whether you want to match the aesthetics of the jacket to those of the trouser.

A young man buying his first double-breasted suit would probably not want a six-button jacket and cuffed trousers in a navy chalk stripe. He should go for a slightly more modern version of that ensemble – in a herringbone, perhaps, with four or even two buttons. Yet the chalk stripe might be the objet du désir for a man 10-years older, with a penchant for grandfather clocks and upholding tradition.

Equally, you might feel that you want to find balance for a very traditional shirt and tie (a contrast collar and knitted spot tie, say) with more modern aspects to the suit. Or you want an ultra-traditional suit because the handkerchiefs will be rather wild. The picture above is of a relatively conservative cut (and cuffs). But the shirt, tie and other accessories are certainly not.

Don’t be bound by the rules. If you understand them they will break softly and pleasingly.

You do not make comment about wearing braces. Can a smart suit ever be right without them giving the trousers a perfect hang. Braces also are much more comfortable to wear that belt and tight waist!

While I fully empathise with the advantages of wearing braces, I have always preferred side tabs to alter the waist of my trousers. I never wear a belt with a suit. Plus I wear my trousers on my hips, not my natural waist.

And I do like the aesthetic/accessory possibilities of a belt with more casual trousers.

Thank you for this! I just had my first double-breasted made-to-measure, and eagerly await its arrival. Because of the jacket always being buttoned, the question of braces vs. belt is simply a matter of comfort, rather than aesthetics, correct?

Levi,
Yes, though personally I don’t wear suits with belts – I prefer side tabs. Also, braces make most sense when the trousers are worn high (on the natural waist).

The suit pictured looks very nice, as does the ensemble. Two quibbles: the jacket is too tight for the model wearing it, and his haircut is especially unflattering.

who is the suit in the picture by ?

“And, as with many questions of style, how an outfit is perceived (by either lay or stylish men) is central to its success, whether people admit it or not.”

this is a very thought provoking statement, and i agree with it to a degree. yet, style mavericks will always face ridicule from others when they break new ground, ridicule which frequently turns to mass acceptance, and often acclaim (once popular perception has adjusted). for example, several of the trends started by the Duke of Windsor would never have happened had he been concerned with what others might have thought.

Thanks for your thoughts.

I would guess that even the Duke of Windsor cared what someone thought about his dress – not the masses perhaps, but a special someone or someones. As I said, how people you regard as stylish see your dress is often as, if not more, important.

I have never actually seen a man wear braces, I guess they’re always covered by the blazers. I think I’ve seen my dad wear them a couple of times. I actually have a confession to make I didn’t know how to tie a tie until last week when I looked at this video http://www.howcast.com/videos/469-How-To-Tie-a-Tie-Four-in-Hand

An old post, but describes exactly the dilemma I am facing. I’m having a double-breasted charcoal suit commissioned from a Saville Row tailor. I intend for it to be pretty formal and fairly conservative (I’m relatively young but lead much older people at work, and so I try to project more gravitas with my clothing).

I’m still undecided, but this article has helped give me more context for why the tailor may think the way he does, and it has helped me frame the choice.