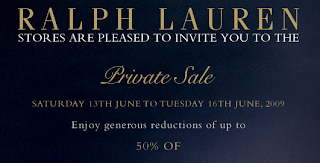 The worse the economy, the earlier the sales start. Everyone is that bit more desperate to get their hands on your cash. Before anyone else does. It was the same before Christmas and, despite some positive news on the economic front in the UK, it is the same this summer.
Ralph Lauren has started its ‘private sale’ – meaning a sale for anyone that has ever bought anything there ever and not refused to be on the mailing list. And any other name they have got hold of. The sale starts on Saturday, until Tuesday. The official sale starts on the 18th, so expect the second wave of reductions two weeks later. And the desperate, 70% sale another fortnight after that. This is the greatest stage, but it only lasts a few days!
Other brands started even earlier – Etro’s private sale was in the middle of this week.
(Oh, and is it just me or is there a typo in this advert? 50% of? Surely 50% off.)

Well, at least it’s a minor typo. It could have been something egregious, like “we should of gone” (a kind of typo I’ve actually seen).

It’s not a typo…they want you back to buy the other 50% of whatever you bought this time.

“up to” being the important word, as in afew non sellers, and the rest at the standard 30 to 40.