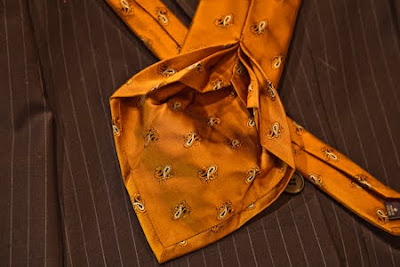 A seven-fold tie doesn’t necessarily have seven folds anymore. That isn’t because of corporate marketing and shortcuts (though the ‘VII fold’ from a certain manufacturer might qualify for that description). Rather, different ways of counting folds have become confused. And over time, seven fold has merely become a synonym for multi-fold.
But understanding how the folds can be counted should help you communicate ideas and designs. Will over at A Suitable Wardrobe reported on this problem recently when he was ordering ties from E&G Cappelli, ending up with 12-folds rather than six. So let’s run through the methods.
Most normal ties have three obvious folds. If you look at the back of the front blade, the silk has been folded in on itself on either side, and one of those flaps has just been tucked under – creating a small, third fold.
Now while retaining the same width of those two flaps, the silk can be folded in on itself almost as many times as you like. You just have to start with more silk and the tie becomes thicker. Take the tie illustrated, made for me by the silk weaver Vanners in Suffolk. There are 10 folds here.
Look at the left-hand side. The first fold, like you get on a three-fold tie, is just a crease in this picture – half way up the left-hand edge. Then there’s a fold at the top-left corner, where the tie folds in. Then another where it folds out. Then two more to get you to the centre. And while you can’t see it in the picture, I can tell you neither side has an extra, small flap like you get on a three-fold. So five folds either side, 10 in total. This goes right through the tie (or it does on a good one) and can be seen on the back blade, though this might be hard to see as it will be quite high up inside.
Yet one manufacturer described this to me as seven-fold. Three outwards folds on either side (the other two of the five I described just now being inwards) and the seventh being the tipping of the tie that makes it look like it is folded in half before construction.
This is an odd method and not one I have heard echoed anywhere else. So let’s stick with the first method. On that, this is a 10-fold. Also, Bulgari ties that the company refers to as seven-folds are actually six-fold. You can tell because for a tie to have an uneven number of folds, it must either have a little lip like the three-folds (which few multi-folds do) or the folds must overlap and concertina into each other. My Hermes ties, for instance are five folds – three on one side and two on the other, folded in between each other. If they didn’t overlap like this, the tie would have one side that was thicker than the other.
And that’s what a seven-fold should have – four folds on one side and three on the other, overlapping. My Isaia tie does this.
Then there’s lined or unlined ties, whether that or the extra silk adds better body, and which creates a more pleasing movement. Much more personal taste, really.

This really is a great blog Simon. My only wish is that you would talk about casual-wear too. Casual-wear can be stylishly done. In fact I would argue that it is more of a feat to pull of, since casual wear lacks of the structure present in formal-wear. This also means that it is a more personal look – it will give us readers a greater insight into your style ethos.
Speaking of structure, I’d love to see your guide to unstructured blazers and jackets.

Nice post!Seven fold is the most luxury neckties. It only exists when we are talking about real high end silk ties.

Are seven fold ties in any way more aesthetically pleasing than regular 3 fold,or is it just a luxury as jeff points out. I would imagine that they could drape differently (not significantly though).

You’re right. They have a better structure and feel. They move way less when you walk.

This is true. I went to Naples to find tiemakers and shirtmakers as I am starting a fashion brand and one of the tiemakers I am going to work with confirmed me this, the modern 7-fold would be a 5-fold if you count them. Literally almost nobody makes the old neapolitan 7-fold as it is very bulky and costumers don’t seem to want them anymore.

It depends what you mean by quality. It takes more time, silk and perhaps skill to make a seven fold, but the materials and methods are the same. There’s no objective benefit, it’s just a nice artistic object

Hey Jonathan, Very pleased you've discovered it, and that you've rediscovered wool. Please do ask questions like this any time on the site when you have them, it helps other readers too. As to RJ merino, I wouldn't put the ready-made clothing in the same…

An Hermes silk scarf with all navy

How to pack a suit jacket: Reader question

They haven't as far as I know, no