I mentioned a while back that I had commissioned a second suit from Graham Browne in London. And after rather too much travelling lately (Milan, Madrid, Dubai in a month; and Hong Kong next week) I’ve finally got around to watching the first step of it being made.

It’s unlikely I will post quite so many photos of this suit in its construction and fittings, in that much will be similar to the last series. But whenever things are new, I will. Here, the most obvious novelty is the waistcoat. 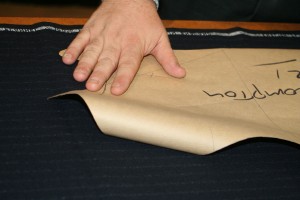 The suit is in 13-ounce, navy, chalk-striped flannel from Hunt & Winterbotham. The weight of the flannel means the stripe is rather fuzzy, which is how I prefer all stripes in suitings. (The only stripe I like is a bead stripe – anything too precise and without texture seems to look cheap.) The jacket is three-button, rolling to two, and the waistcoat has notched lapels with five buttons, rolling a little at the top as well.

A new waistcoat pattern was cut for this suit, but not a new jacket pattern – my existing DB pattern being simply folded over to cut the SB jacket front panels. The waistcoat has a full, floating linen lining, something tailors rarely do these days. The linen gives structure and a shape that moulds to the chest, while not being too bulky.

Russell and Dan report a lot more waistcoats being ordered these days. (Perhaps people have been reading the Logical Waistcoat Theory.) In fact they say they’ve made more in the past year than the past 10 years together. Problem is, there aren’t many waistcoat makers around any more. Graham Browne uses one lady and she is overworked. Jacket makers can make waistcoats as well but they dislike it, as the work is similar for less pay.

The other issue with waistcoats is that men today wear their trousers a lot lower. The question for the tailor is: does he try and convince the client to have his trousers cut higher for a waistcoat, or make the waistcoat longer? Having a gap is not an option, but some men would resist the former, while the latter can make the body look too long. Russell says he leaves it up to the client to a certain extent, but there are limits.

Also if you plan to wear a separate waistcoat with a suit, buy that or have it made first. One client of Graham Browne’s didn’t tell the tailors that he already had a fancy waistcoat he wanted to wear with this suit, so the trousers were not cut high enough. Always best to bring the waistcoat along, so the trousers can be cut appropriately.

In the images here you can see the folded jacket pattern being placed on the cloth; the sleeve pattern being chalked on; the linen lining that will be used on the waistcoat; and finally the marked-up jacket.

In the last picture those three horizontal lines you can see at the top left are the button placings. The curved line coming up into them (from underneath the middle of the scissors) is the edge of the jacket. Notice how it meets the vertical between the first two buttons, to take account of the roll (you’re looking down the jacket).

You can follow the discussion on Second British bespoke, part 1 by entering your email address in the box below. You will then receive an email every time a new comment is added. These will also contain a link to a page where you can stop the alerts, and remove all of your related data from the site.

I've had two 3-season suits made on Savile Row with jackets lined with pure silk. One is lined with elegantly patterned silk lining the well-known SR tailor (you have reviewed them!) had on hand. The other -- made in flannel -- is lined with 22…

Perhaps. Charcoal worsted would be easier because the textures would be different. And I'd make sure in either case that there was some rich colour like navy or brown going on elsewhere, so the whole thing didn't become too tonal

Sorry, I'm not sure what you mean by the 6 and 4? I would add, though, that once you get down to 1cm it's really not worth bothering with and won't be noticeable. Materials change that much just when they warm up, and any shirt…

Hi Josh, I like a lot of the looks, and am a particular fan of the sportswear from that period. The tailoring proportions would look a little dated if worn today though, so I find it's best to take inspiration from one or two small…