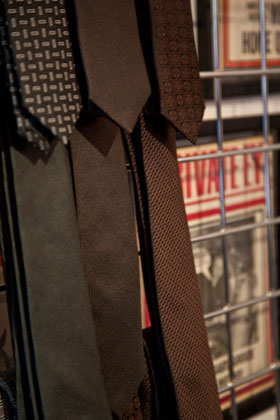 A good tie has some form of ‘spring mechanism’ so that, after you have untied it roughly, tugged it out of your collar and hung it up, the mechanism gradually returns it to its natural shape.

This is achieved through the slip stitch, which runs the length of the tie from one tack to the other and requires some slack so that, when it is compressed, it can ‘spring’ back into position. On some ties, you will see this slack as a small loop of thread protruding from the narrow end. Off the top of my head, my Hermès, Drake’s and Bulgari ties certainly have it.

However, this is not the only way to create some slack. The excess thread can also be tucked back inside the tie, sometimes even secured to the slipping of the tie itself or to the back of one of the labels. This can be done at the narrow or wide end of the tie.

So why are several ways of achieving this ‘spring’ still being used? “You might wonder that, as I  did once when I first started in the trade,” says Martin Brighty of Hunter’s.

“I was told by the head slipper (seamstress Lil Groger of Holliday & Brown) that the women tie makers would move from firm to firm, bringing with them different techniques. They were often told to use the style of the firm, but if they could they would retain their own method as it was faster – and they got paid per tie. These days the girls again all move between companies, some work for two tie makers at a time, depending upon who has the work. So construction can vary; Hunter’s has both loop and tucked-back ties.”

There is no particular advantage to any of these methods. But one obvious difference with the loop is that you can see it – the spring mechanism and so the craft is on display. The others are less obvious or can’t be seen at all. So some manufacturers prefer the loop in order to prove the craftsmanship involved in their ties.

There aren’t many reasons for not having a loop, but Martin’s colleague David Walker knows one: “I remember selling ties in Harrod’s back in the day, and these Nina Ricci ones were very expensive, £85 or so. One day a man came in and complained that his tie had fallen apart. ‘It just came away in my hands,’ he complained. Turned out he had cut off the loop, thinking it was a loose thread.”

So that’s one disadvantage of an obvious sign of craft.

Says a lot about the man that would wear Nina Ricci ties.