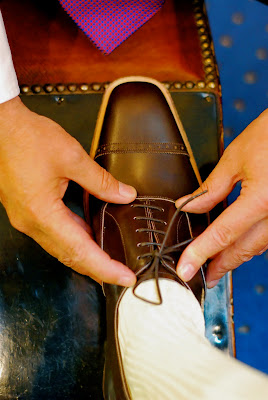 Finally, I get to put my GJ Cleverley shoes on. This is the first fitting, following the shoe being lasted and a welt sewn on by Andy last month.

The shoe has no sole, but the welt is sewn around the front and braced at the back, with a temporary heel nailed on so I can wander around the shop and see how they feel. The plastic shank has also been glued on – Cleverley generally prefers plastic to wood for shanks because of their realiability. Some wooden shanks can squeak.

The joints on the shoe look to be in the right place – the points at which my big and little toes connect to the foot lining up perfectly with the widest points of the shoe. The quarters are tight to the ankle, but far enough away from the ankle bone to avoid any unpleasant rubbing. (Interestingly, George Glasgow comments that Japanese men tend to have their ankle bones proportionately lower than western counterparts, so the quarters have to be scooped rather lower.)

The waist of the shoe is very sculpted and high, tight to the arch of the foot. And the ankle is held snugly but comfortably. The toe box is pretty long, but that is standard for the Anthony Cleverley style that I picked; the classic George Cleverley would be shorter and squarer. 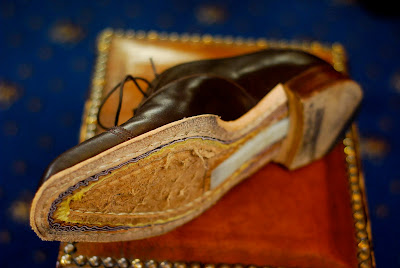 The only area that could be improved, which George (Glasgow) points out, is the vamp. There is rather a lot of excess room between the joints. That can be felt when I walk around the shop, as the excess leather bites rather into the joints of my toes and pinches the edge of the little toe. And while the facings do not seem that loose, they are laced pretty tightly – you want a good half inch of gap between the tops, or lips. If there was that amount of space here, the shoe would be pretty loose.

So George removes the shoe and retakes his measurements on the joints, just behind the joints, on the arch and the heel. These will be compared to initial measurements and the last adjusted accordingly, with a little probably being scooped out of the cone. The welt will be then taken off (at least the back part of the shoe) and it will be relasted.

A second fitting in three or four weeks (Andy being away for a couple of those, and it always being a bad idea to change makers halfway through a shoe.)

You can’t rush these things.

Thanks, I think you just solved the mystery of my squeaking shoes! Is there anything that can be done about it?

Hi Dan – not really, unless you replace the shank when you next have your shoes refurbished. But squeaking isn’t necessarily just due to the shank. Have a search on this site for my piece on shoe refurbishing at Edward Green.

you could try talcum powder – I’ve used it to stop squeaks , apparently it’s also used to stop squeaky floorboards ( according to my mum ). Michael B

Hi, Do you have any pictures of the finished shoes ( I understand this was a while ago), also , what was the total cost ?

Yes, have a search for part 11 in the series, or the Compendium that collects them all together.

Cleverly prices have gone up since then. I believe they are now about £2700

Thanks for the reply, really enjoyed reading that. I’m a huge fan of Crockett and Jones shoes but cannot remember them being mentioned on here. What are your opinions if them ( if you have any ) ?

I rate them, great shoes. I just don’t own any myself so I’ve never done a more extensive breakdown or wear report

Thanks again for the reply. Are you only a fan of English shoes or do you like Italian ones like Testoni ?

I only have Berluti RTW. But I’m a big fan of Stefano Bemer (as it was) and Hidetaka Fukaya for bespoke

I’ve been looking at shoes recently with the intention of buying some brogues. I have found two pairs that I like in the sales, one is made by Church, the other is an Alfred Sargant (exclusive range). Both were around £330 and the AS are now £215 and the Church are £195. Where would your money go ?

Probably Church’s, but there’s not a lot in it. Maybe just go for the style you like best

I have just purchased online, a pair of Cheaney boots in graphite leather . I intend to wear with jeans . Do you think this will look ok ? The boots are a lighter colour than most graphite colours I’ve seen .

That sounds like it might work well if the grey is lighter, yes. Stick to dark colours elsewhere

Thanks. The boots are called Cheaney Newcastle if you wish to take a look.

What are your views on Oliver Sweeney footwear ?