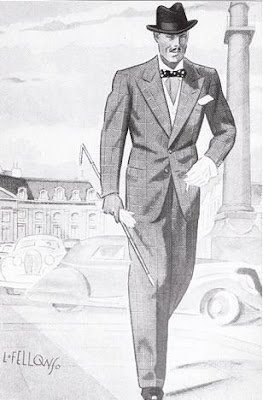 London manner for Springtime in Paris

Esquire, May 1936: “Anthony Eden has exerted an enormous influence on continental fashions this year, as witness this turnout featuring such characteristic Eden touches as the black Homburg worn with a white linen waistcoat and white gloves.

To American eyes the effect is somewhat dandified, but the Continent is always fertile ground for the dandy manner. The suit is of flannel with a faint blue overplaid. The shirt is of fine batiste with a white laundered collar, the specialty of a famous Paris shirt maker. The large knot foulard bow is a typical French shape which has gained London acceptance. The sack wrist gloves are light-weight white pigskin.

Americanisation of this outfit may involve dispensing with the white gloves and the rattan stick and substituting a soft felt or straw hat for the Homburg. But the combination above is not too extreme for Metropolitan acceptance.”

Nice to hear Eden lauded for his elegance, and interesting that such finer points would be dialed down for the American audience. It’s probably fair to say that, accepting some fairly awful dressing around the UK, the same difference in formality remains today. I’d wear the American version of this outfit, though with a long tie rather than bow. Flannel with a windowpane check, in particular, is a must-have commission for this winter.