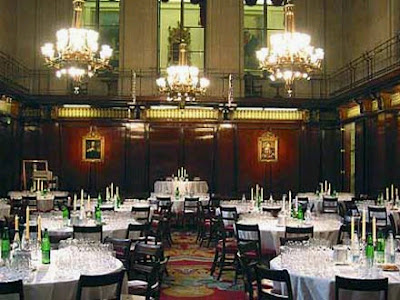 Well, there aren’t any pictures available from last night’s MTBA annual dinner. Or at least none I could convince anyone to hand over. But readers would have been more impressed at the standard of dress than at the summer ball, I think. Edward Sexton’s tailoring on himself, his apprentice and Anda Rowland was exquisite. John Kent was wearing some particularly natty tartan trousers in a cloth gifted to him by the Duke of Edinburgh. And the senior cutters were uniformly well, if conservatively, turned out in single-breasted black tie and waistcoats – Patrick Murphy and John Hitchcock amongst them. Angus Cundey did a great job at stepping in as chairman at the last minute. Get well soon Cameron.

A pair of Cleverley bespoke shoes were auctioned off for £2500, all going to charity, after a bidding war between the cloth merchants (sorry Douglas) and guest speaker Sir Tim Rice was impressive at weaving tailoring allusions into his Australia, cricket and Lloyd Webber-related gags. And I swear that was Brix Smith-Start from Gok Wan’s Fashion Fix in the corner. Which was nice to see, given the amount she’s done to highlight British craft through factory visits in that series.

Thank you for the compliment Simon. You negated to mention how dashing you looked clad in velvet.