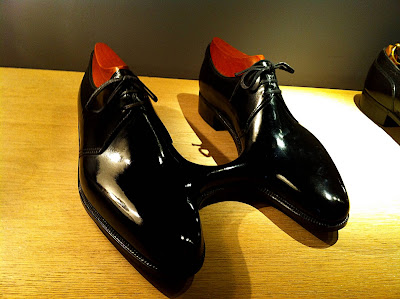 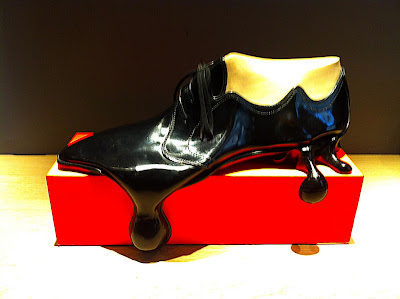 Pierre Corthay’s little atelier is growing, with a bigger space for ready to wear, an office across the courtyard and a new home for the workshop just across the hall. Add to that the underground caverns that house the lastmaking and last storage, and you have a beautiful little warren of rooms dedicated to all aspects of shoemaking.

Most excitingly for English readers, Corthay shoes will be stocked in Harrod’s from April and a new Corthay store will hopefully open on Mount Street towards the end of the year. The ready to wear has been limited both by volume and geography for too long. I bought a pair of Wilfrids at Leffot three years ago, which I love, but other than those I haven’t laid eyes on a pair of Corthay since. Although Pierre says the growth will be slow and cautious, this expansion is very welcome news.

On visiting the newly decorated store in Paris, I was particularly taken by the display pieces pictured. They are both entirely handsewn, around the drips on one model and bar on the other. Pierre says he broke several needles sewing the latter. It is supposed to be a moment in the creation of a pair of shoes, as one splits into two rather like an amoeba. On the melting shoe, the heel drips are also made with little pieces of heel stack, glued together and then filed into shape.

One day these will be in a museum. 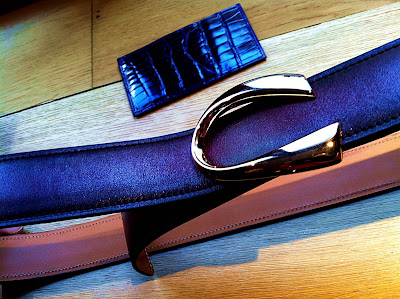 The shoes are fantastic! Surrealist works of art, worthy of Dali.

But the belt buckle is another story.
Personally, would not be caught wearing any “branding” … i.e., marketing.
I find this “C” particularly unattractive.

Crossing the line from clothing as wearable art to clothing as conceptual art. (And every bit as practical as most runway exhibitions.)

gorgeous…
simon, could you do a post on watches some time? surely one of the most important accessories for men. in particular, what do you think of wearing big watches (42mm+) with a suit? i know a lot of the pitti types love it but this often looks wrong to me.
also what watch do you wear? what are your recommendations for a good quality affordable watch? thanks