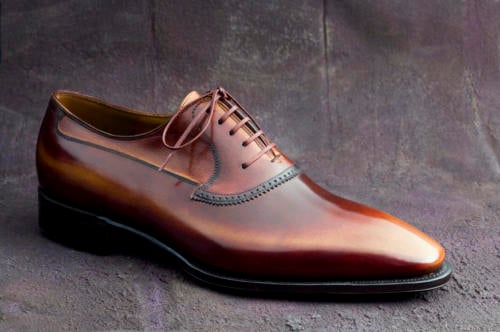 Pierre Corthay is one of the best shoemakers around, but is not well-known outside France. Trained at both John Lobb and Berluti, he has a pedigree from possibly the two most respected shoemakers in the world, for quality and design respectively.

Like Berluti, he has used some innovative marketing and eye-catching designs to gain attention across France. And he has gradually acquired stockists in Japan, Germany and the USA (Leffot and Bergdorf Goodman). If he were owned by the giant LVMH, he’d probably be as big as Berluti already.

I like Corthay shoes because they are sleek without being pointy (cf. Artioli), have a lovely patina without being over the top (cf. Berluti), and are universally renowned to have great construction (again, cf. Berluti). 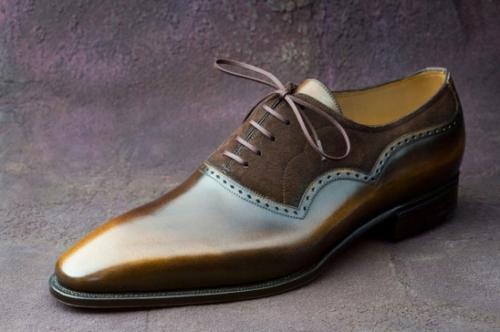 I wore my pair of Wilfrids, probably inadvisably, in torrential rain in London recently. They coped very well, without a stain on them and no signs of damage. In fact, come to think of it, they had had a few spots of rain on a previous occasion and there were no marks that time either.

I hasten to add that on neither occasion did I submit the shoes to this treatment on purpose. But as an assistant in the Gaziano & Girling showroom told me that day, “you wouldn’t want to be wearing a pair of Berlutis on a day like this.”

A look at the website (www.corthay.fr) illustrates the Corthay taste for the extreme. Neon-orange leathers and turquoise two-tones are always going to stand out from the crowd. But I am informed that 90% of the shoes they sell are still black or brown.

What blacks and browns though. Highlights are the two-holed derbies with elongated tongue, which look great in smart and clean shades, and the suede-and-calf combinations – a modern take on the traditional business model.

Having trained at Lobb in 1984 and become the senior craftsman at Berluti in 1985, Corthay opened his own store in 1990. Five years later a contract for 150 bespoke pairs from the Sultan of Brunei kick-started the business, which added a ready-to-wear in 2001. A tricky experience with a subcontractor led the company to start doing its own ready-to-wear and opening its own factory in 2003.

Today, Corthay probably competes with Aubercy for the reputation of the best-respected shoemaker in France. I highly recommend a look next time you are in New York (Leffot, Bergdorf Goodman) or, indeed, are strolling down Rue Volney in Paris. 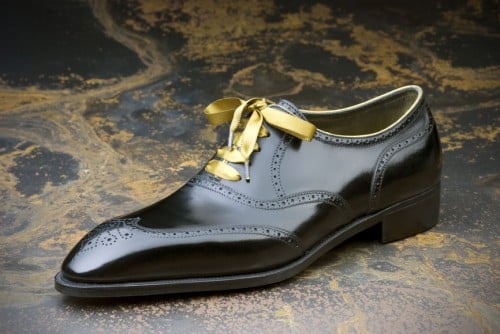 I would say that Berluti and Corthay shoes are on par with each other. Neither, in my opinion, are as good as Kiton or Bontoni. Bontoni, Kiton and Lattanzi are far more superior.

How about trying us – carreducker? We ‘re relative new kids on the block – in business just four years as partners but were both trained by a master Lobb maker. Our shoes are stylish without falling foul of fashion and have well-balanced joint/toe proportions to suit a broader western foot without losing the elegance. http://www.carreducker.com

I really love the two toned shoe wow!i wish you had more pictures. looks like a credible shoemaker.

Simon,
Glad to hear how well your shoes held up in the rain. I’m sure you wiped them off and put them on the trees as soon as you could. Yet another example of the benefit of wearing quality footwear.

Thanks Steven – they did do very well I have to say!

I agree with Still Life about Bontoni and Kiton. Here’s my take (For what it’s worth!)

John Lobb on St. James’s Street(a non Hermes-owned entity) makes a fantastic shoe. I commissioned a pair from Lobb three years ago. I also have a few made-to-measure shoes from Bontoni and Edward Green. In terms of the French, I am not very fond of Berluti, Corthay or Aubercy. Their styling tend to be too ostentatious and avant-garde for my taste. Bontoni and Kiton (my two favorites)are crafted exceptionally well (truly hand made), their styling is discreet, and the coloring/patinas-especially Bontonis- are inimitable–superior to that of even Berluti.

I think my Pierre Corthay Derby’s are the most comfortable and beautiful shoes I own. That is including over 100 pair.

You’re enthusiasm for shoes excite me. I’m not sure about the Berluti comparison, but i have to say that this is a wonderful piece. Too bad you can these things only the fashion capitols of the world.

Personal tastes are respectable, but it’s not what can give an objective idea of the qualities of shoes. Corthay is a shoemaker, he makes bespoke and has a RTW line. So does Berluti, but not Aubercy anymore. The Corthays RTW are goodyear welted, Berluti and Aubercy are blake sewn, which gives maybe a better comfort but is a poorer and cheaper technique. Berluti RTW shoes offer generally poor leathers, and cost between 1,000 and 1,400 euros a pair. Corthay RTW shoes cost between 850 and 1,000 euros, shoe-trees included. And being a shoemaker, Corthay can make any pattern, even the more classical.
Regarding Kiton and Bontoni, I have no idea of what it’s worth, but I often wonder what means exactly the “fatte a mano” mention.

A few inaccuracies there:
– Corthay cannot make any pattern in RTW, merely its standard lasts in a variety of sizes, in exactly the same way as Berluti.
– Berluti makes bespoke shoes in the same way as Pierre, to any last and style. Both do made to order, but again on the standard lasts.
– Berluti RTW is made at Stefano Bi outside Bologna. Corthay is made in its own factory outside Paris. To different constructions though, as you say.
– In three years of wearing both Corthay and Berluti (since this post was written) I wouldn’t say there is any evidence of the former necessarily being made of a better leather. Just different.

When I say that Corthay can make any pattern, I speak of his bespoke business of course.
Regarding Berluti, the longevity of venezia leather is often ruined by the double patina made on it.

Hi Simon do you know if Corthay makes (or perhaps has made) wholecut loafers in their bespoke line ? Thanks.