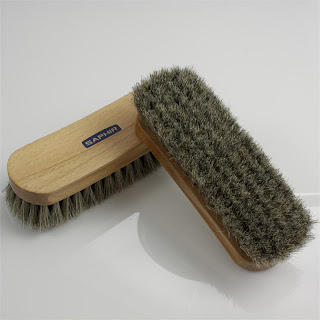 Craftsmen aren’t necessarily always the repositories of knowledge that consumers assume they will be. Sometimes their knowledge is narrow, restricted to the construction of a pair of shoes, for instance, with little objective advice on their maintenance. Often it is because they don’t wear their own shoes day to day, or at least do not obsessively polish and collect them like their customers. It could be seen as the difference between a craftsman and a designer.

I am often surprised, for instance, how few shoemakers will tell men to brush their shoes at the end of every day. A quick brush down with a relatively stiff brush removes the incidental scuffs that inevitably occur during a day of wear, and reduces the polishing required to keep up a blemish-free surface. It is one of three things every man should use on a good pair of shoes: brush, shoe trees and polish.

Brushing was a regular chore, traditionally done by a man’s valet or, later, perhaps by his wife. You can see it in several old films – David Lean’s This Happy Breed is a nice example. At the end of a long day Robert Newton sits down at the kitchen table and pulls off his boots. Celia Johnson takes them and brushes them down as they dissect the day. It is a reflective piece of domesticity.

Of course, brushes can be used to remove dried mud from the sides of the soles, as well as to work the upper. The two brushes shouldn’t be mixed up, but neither should the one used to work the upper be too soft – brushes sold to bring up the polish on a shoe, despite also being horsehair, are sometimes too soft to remove scuffs.

Remember to brush your shoes at the end of the day. And give them a quick wipe with a cloth in the morning.

Merrifields in East Dulwich, who do an excellent repair service, are currently stocking some wonderful polishing brushes for £15. Take a look.

They are about to start stocking ready-to-wear shoes as well as the currently offered bespoke service. Rob, the owner, is a top chap. Say hello.

Thanks David, I didn’t know that. Though I certainly know Merrifields and can recommend their repair service.

Do you keep separate brushes for different colours (and separate from those brushes you use in actually polishing the shoes)?
I gave a mid tan pair of boots a quick brush down the other day to remove some scuffs, and it made them noticeably darker -I realised the last time I’d used that brush was on a dark brown pair, and wondered if I’d transferred a touch of that colour across. Luckily the result was quite attractive.
Thanks,
Tom

Tom, I do keep separate brushes, but you really just need two – tan or other pale colours, and everything else. As 95% of my shoes aren’t tan, I use one brush for each function most of the time.

Simon, do you ever clean your brushes? I tried once but it made such a mess of the sink that I haven’t attempted it since.

hi simon can you recommend any other cobblers for heels / shoe repairs?

I clearly don’t own enough shoes – i have yet to start using percentages when describing the collection!
Thanks
Tom

I can recommend Kokos shoe repair in North London, though I resole and repair nearly all my shoes at the original makers. Ian Buxton wrote a good piece on Kokos on Gentleman’s Corner.

I own a couple of Allsaints shoes and boot and as you may know they are made vintage by distressing the leather. I really like the look they give you but would like to give them a longer life. So, cleaning them and then distressing them may be a bit of a challenge 🙂

Thank you for the effort put forth in educating the consumer, this is a task we in the fashion industry have overlooked for far too long. It has been particularly so here in the Unite States where our relative short history along with the desire to render products obsolete has promoted keeping consumers in the dark.

I find this investment of time not only a worthwhile effort but one that is essential to the survival of the luxury market.

Fine, useful article.
Thanks for posting.:)