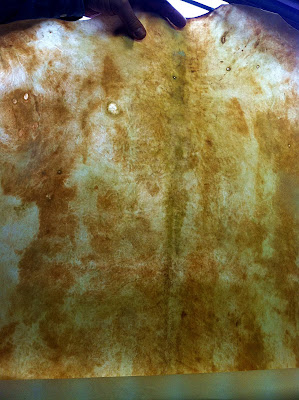 Bill Amberg has recently moved to lovely new premises in Queen’s Park, north London. The landlord that owns most of the street apparently refuses to turn it into flats, renting the lot out to small businesses instead. This means that you wander past a little bar, a café specialising in cupcakes and several places where something large and clanking is being manufactured behind wooden doors. Of course, anywhere in London looks good when the sun’s shining.

Bill’s operation includes administration, the design of all prototypes and the manufacture of his interior decoration. While I was there two girls were carefully assembling a series of wall panels in grey leather, kneeling on the table and slicing strips to a very meticulous plan. (This commission work accounts for around half of the Bill Amberg business.)

Upstairs in the attic is where all the leather is stored, along with the bag prototypes and several archive pieces. Predictably, it was the leather rolls that caught my eye and we spent a while discussing rawhide and its permutations (an interest triggered by the rawhide suitcase seen on a factory visit here).

Rawhide is skin that has not been tanned. When the skin is removed from the animal, the fat and proteins between the fibres are removed, leaving raw collagen fibres. To make leather, something else must be put in between those fibres. Until 1913, it was vegetable tannins (which is where the word ‘tanning’ comes from): a mixture of local bark and other vegetation. This gave the leather a very natural feel, as well as a look that was specific to the country or region (oak bark tanning was the traditional English version). Since 1913 an increasing amount of tanning has been done with chromium sulfate.

With rawhide, you just have raw collagen fibres. This makes the skin harder, more durable and lighter. The amount of fat and protein that is left on varies between types of rawhide. At one end of the scale is a drum top – pictured at top – which is very crude and variegated. At the other end is parchment: by soaking the skin in hot water, stretching it on a rack and scraping it with a half-moon knife, more and more fat and protein can be removed until you get a clean, white surface that is suitable for writing.

In the middle of this scale is vellum, which is a traditional material for suitcases because it is so durable and light. Bill recently decorated a man’s dressing room in it. 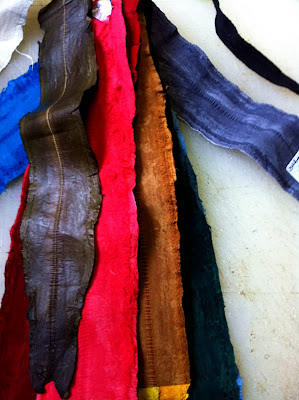 Also pictured are eel skins (above), which are cheap and plentiful so despite being small can be panelled together in long rows. And a dragon hand-carved into leather – something another client asked for, except 10 times the size and in the middle of his floor. 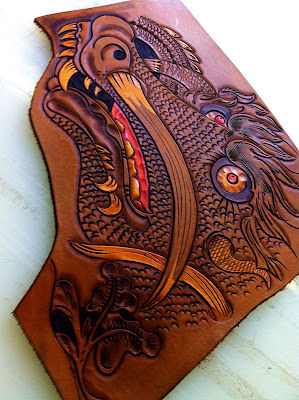 You can follow the discussion on Factory visit: Bill Amberg by entering your email address in the box below. You will then receive an email every time a new comment is added. These will also contain a link to a page where you can stop the alerts, and remove all of your related data from the site.

With a shawl collar suit I'd go for a less dressy shirt, so a fold-down collar and a shirt with either a plain front (covered placket - see my velvet here) or pleats

How to pick shirt fabric

Hi Arthur, Well obviously I'm biased, as I've designed what I think is the perfect OCBD. However, I can say that Bryceland's has some great traditional style details that the others don't (eg locker loop) and Drake's is more of an English make, the PS…

I appreciate the view. Though bear in mind this isn't fur like a fur coat. The skin is not being used - it's shaving the hair. And any even decent hat would be rabbit or hare used in the same way.