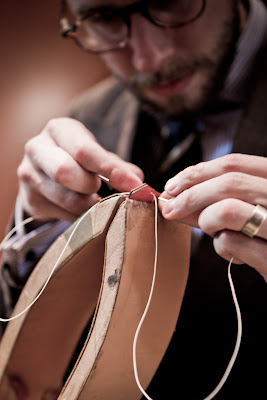 As mentioned in the first part of this Hermès series, artisan Claire Marie was kind enough to allow me to try stitching part of the clochette that she was making. As with previous attempts at being hands-on, it of course all went wrong.

It’s easy to watch demonstrations of stitching or cutting and think that the act itself is not that difficult. What is hard is maintaining concentration as the act is repeated, and making small adjustments as the surface of the leather, silk or worsted changes.

That is probably true when one is trained and the fundamental processes of your craft have become virtually automatic. But it takes a long time to get there. Under Hermès training in Paris, everyone has a qualification in leather working when they join but still spends a whole month just learning about their tools, and the next few weeks just repeating the kind of saddle stitching I attempted here.

The saddle stitch, as explained in the previous post, requires two needles to pass through the same hole, with an awl first piercing that hole and guiding the first needle through. It is this process of guiding the needle back that proved tricky for me.

The temptation is to bend your head down and look at the underside of the leather, to see where the needle has to go. But if you do this every time it takes too long and is very hard on the back. Pushing the needle and pulling the awl at the same time is not, however, very intuitive.

I think I managed it on the fifth or sixth attempt. By that point I was sweating and my teeth were gritted. It felt like a minor milestone. Claire was kind, saying it was more difficult than it looked and that the pincer that holds the leather was clearly the wrong size for me.

I think I’ll stick to writing, and appreciating leather from afar. 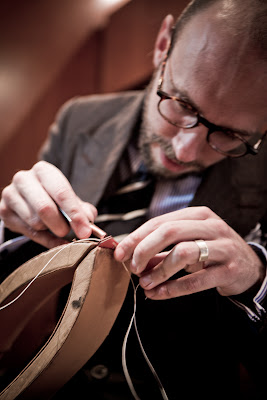 You can follow the discussion on Hermes: Trying the saddle stitch by entering your email address in the box below. You will then receive an email every time a new comment is added. These will also contain a link to a page where you can stop the alerts, and remove all of your related data from the site.

I think they're definitely worth trying Joe. Mostly because they're so versatile - from suit to jeans. Start with a penny, as it's simple and less ostentatious than a tassel. And either C&J Handgrade or Alden if you're starting out. Personally, I'd do the former…

Ha! Yes I think that's a good call. And yes, Graham Browne or Pinnas & Needles could do some good alterations to get the fit exactly what you want. Quite easy on a cotton piece like that.

I have tried Drakes tailoring and it is definitely not at the same level as Saman Amel or Orazio Luciano. But maybe Simon is too tough on what should be in Level A for jackets. I would say that Saman Amels cheaper line is Level…

You mean my navy Cifonelli? I wouldn't wear that casually, eg with jeans, usually