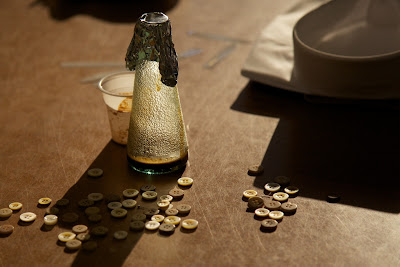 I was in Naples last week for this site and The Rake, talking to tailors, shoemakers and those of associated crafts. It was nice to spend a few days in the city and get to the point where I knew my way around, where I had never really had time previously.

One of the things I always find interesting in such trips is how priorities vary between tailoring cultures. Not just the different styles to a lapel, but the little things that are so accepted as to be rarely discussed in one city, yet ubiquitously contradicted in another.

Little things like buttons. English tailors will use unpolished horn buttons 90% of the time. A polished button is considered showy, too like ready-to-wear, perhaps a little too similar to plastic. Certainly the difference between a polished horn button and a good fake on a Ralph Lauren jacket is far less pronounced. Most Neapolitans consider this silly, polishing their horn (as it were), and using corozo nut buttons as often as horn – which can look even more like plastic.

Silk lining in jackets is another. I remember when I was first learning about bespoke and speaking to English tailors, everyone said exactly the same thing about linings: synthetic silks like bemberg are much better, for longevity and breathability. So how come no one in Naples uses it, where the weather is that much hotter? Even in fully lined jackets.

To stray onto something a little more fundamental, the attitude to hand work, particularly on shirts, is completely different. One young Neapolitan gentleman genuinely told me “I’d simply die if I couldn’t wear shirts with handsewn buttonholes.” It was rather Anthony Blanche. And yet, as I pointed out, English shirtmakers put no hand work into their shirts – even the aspects that could be considered more functional, less aesthetic, like attaching sleeves or sewing collars in the round. These guys love English brands; but they don’t quite agree with their principles.

There are hundreds of differences. (Buttonholes on jackets being another. Fine or double-sewn work is considered rather foppish and associated with north Italy or France, yet a waterfall at the sleevehead is not.)

I have deliberately steered away from differences that are obviously matters of taste, such as padding and pocket shapes. The number of little things that remain should perhaps serve as a warning to anyone who takes his principles of tailoring too straight or too seriously. 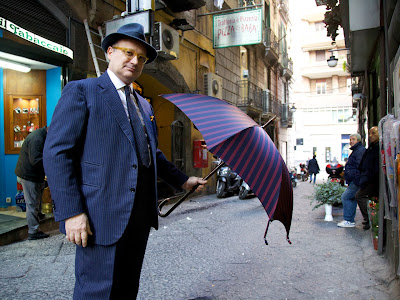 Actually, I’ve wondered about the silk lining topic myself and found the exact feedback. What would they say about why silk is used over bemberg?

That it feels and looks better. Which it does, in my opinion.

Differences in tayloring … cultures. This is an issue that needs to be properly digged into, Simon. I hope you would do that! From my perspective, that is mainly from someone interested in ready to wear, one thing is really striking, namely the variety of the items produced by these guys in terms of cloth, color and style. It is quite easy to check this claim. Just consider a quite simple classic item such as the navy blazer. Now take a look at what the most well known British fashion retailers and stores are offering right now: slanted and ticket pocket jackets as though we were all addicted to that, and that they couldn’t do otherwise! It’s the new uniform, as powerful as the former “no brown in town” dictum! It is absolutely impressive and … depressing as well! Whereas they could introduce a bit variety. Thus, there is a huge gap right now between the high quality and variety of cloth still crafted in the UK and what are actually offered in stores or online as ready to wear items! To escape the uniform in style and cloth, bespoke seems then to be the most sound alternative! Such a huge gap is my view unthinkable in Neaples and more broadly in Italy.It goes without saying that the fashion retailers are sticking to these uniforms at their own peril!
John

“It was rather Anthony Blanche” – Brilliant

Can you recommend a good online source, or at least, state-side source for quality horn buttons? Looking for really quality buttons that will add to a hopsack blazer without being too obvious. Any recommendations on a shade, or over-all color tone?

Afraid I can’t help Andrew, having never bought any in the US. I like a dark brown though, with plenty of variegation in the colours

I am visiting Naples in a couple of months, I was wondering if you had any particular advice for a quick trip. I would love to commission a few items but would love to work with those craft persons that wouldn’t be put out by a request for expedience.

Specifically, I am looking for a Sports Coat for warm weather, Trousers that will work with my hyperbolically long rise, and of course they will likely be at different sartoria.

Thanks in advance,
David

Hi David,
In general, travelling for such purposes is not that useful, as you should really have at least two fittings and they would likely be weeks apart.
Some houses, like Rubinacci, can arrange for those fittings in a week by putting you ahead of all other customers, but it is expensive and most don’t offer it.

Thank you for your reply, Simon. If a tailoring house is offering to do measurement and then a single fitting would you advise against this?

If they don’t also visit your city so there’s no chance of further fittings or corrections, yes