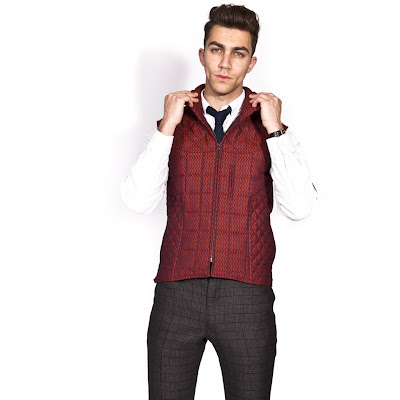 I once spent a lovely afternoon browsing through Guy’s wardrobe. Well, a room really. Such colours, patterns and corduroy. Beautiful stuff. Only for a man that wears a suit every day – so that there is room for such things as weekend suits, knockabout suits, suits for a pub lunch on a Sunday.

Guy and I also have two other loves in common: cycling and Russell at Graham Browne. Guy has spent much of the past two years working on a collection of clothes for the former activity, using some Dashing Tweed cloths, with the latter helping cut the initial patterns.

These all went online in December. Finally, I could buy some of these things rather than just see Guy or his brothers wearing them. “Initially, I just made things that I loved, that I wanted to wear – particularly on the bike. It was hard to take that jump into production,” says Guy. “But the Converse deal last year was a great vote of confidence. That spurred me on.” (Converse did a line of trainers featuring a Dashing Tweed at the end of last year. Timberland and Clark’s are also in the pipeline.) 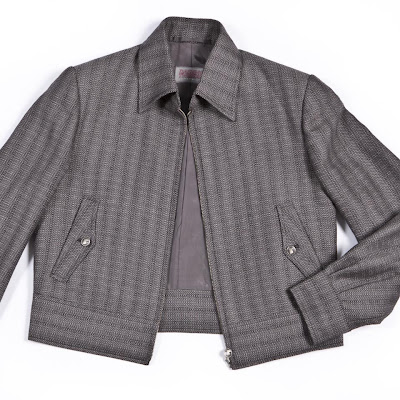 The colours, it’s fair to say, won’t be for everyone. But with much of modern cycle wear so dull – or hideously bright – this provides a nice alternative. I love the Dashing Brigandine, in bright red with varied scales of quilting (top). But if you want something more restrained, the Cropped Lumatwill Jacket is great (above). And if you’re not familiar with Dashing Tweeds, I think you’ll find the Lumatwill is just as bright as those nasty fluorescent yellow things. Just try shining a torch on it!

I think the way in which Guy’s clothes really should stand out, however, is the cut. Using bespoke techniques to get a close, effective shape on the bike, they are also inspired by a lot of medieval armour, which was designed to move through interlocking panels in a similar way to panels of wool are on these jackets. One of guy’s favourite pieces is the 15th-century mounted armour below, which inspired the jacket in the next pic down. 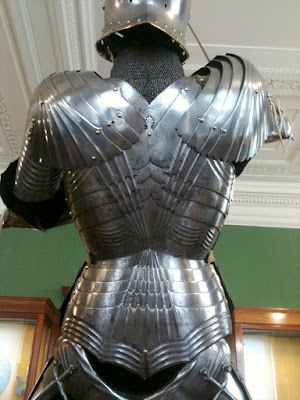 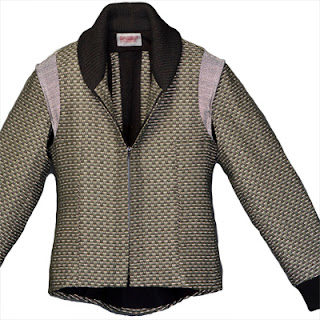 The Cropped Lumatwill Jacket is also based on an old military shape. All Guy’s clothes are made in Tottenham, North London, and conceived at the weave design studio in Dalston, East London. They use the best materials and cloths woven in the UK. And while they may seem expensive, trust me, they are fantastic value for money. Just listen to Guy tell you about selling anything like this through a department store.

To finish, a call to arms from Guy: “It’s time to grab British cloths back. Replace drab cotton and denim with British wool and tweed. Tweed is how men traditionally wore a lot of colour – the colour that was all over men’s wardrobes until it was sucked out by Armani in the eighties. Let’s put fun, colour, style back into pootling around town.”

Im sorry this is a bit off topic.
Im a recent graduate and my budget doesn’t stretch to a bespoke suit.
I have read all your blogs about off the rail suits etc but Im going to ask the question anyways.
Is there somewhere I can get a Peak Lapel, obv well fitted suit, maybe 3 piece, for a budgeted price or am I going to have to wait until I save up for a bespoke one?

One of my favourite posts. While Guy’s beautiful tweeds are expensive they do offer good value for money, and can be incorporated into a very fashionable wardrobe if that is what one is looking for. Don’t forget to look into buying end of the roll clothes to save some money!

Hi Simon, the first time I heard of Dashing Tweed, it was in the context of a report on the annual Tweed Run event, to me actually the best opportunity to take a look at the various hues of tweed available today. Now as to Guy’s call, I only hope it will be heeded by the game changers and pace setters alike!
John

Hi Simon, I was wondering what you think about Brooks England cycling bags? Here is an example that I particularly like. Would love to have your opinion on it.

Hi Jason – I’m no expert on high-street suits I’m afraid, and the answer depends a lot on what you mean by budgeted and obviously well fitting. The latter, in particular, will depend a lot on your shape and what you expect from fit.

But wherever you go, bear in mind my points about quality, canvassing in the chest and fit. And get it altered.

Thank you Simon – Ive decided to save up for a bespoke suit. Ive tried on what the high street has to offer and it doesn’t do the job.

Parth – I’ve seen the Brooks bags at the factory and they are great. Nice that they are now made in Birmingham instead of China as well. I know they spent a long time trying to find someone good in the UK. It’s not easy.

No personal experience of this bag, but it’s certainly worth going and seeing it somewhere, or trying it.

Thanks very much for this.