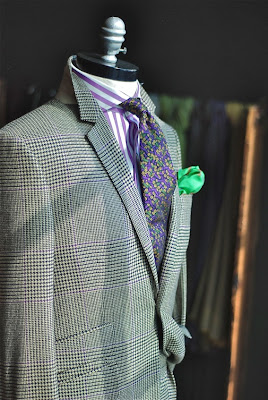 There’s something special about downtown New York in the afternoon sunshine. Perhaps it’s just the romanticising of a Brit abroad, but the West Village and Nolita seem to have a certain rarefied air about them on such days – relaxed, artistic, alive with possibility.
It was on such an afternoon that I went to see Kirk Miller of the tailor Miller’s Oath. Kirk is the brother of Derrick, and used to run Barker Black with him until he launched this family-branded tailor. The oath referred to in the name is a promise to both customers and the brothers’ ancestors, who were in the clothing business. 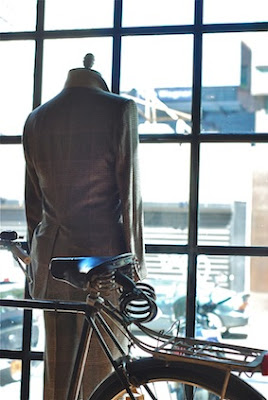 The shop has a beautiful atmosphere. Sun pours through the big front windows on an afternoon like this, lighting up Kirk’s model jackets. He has a thing for glen check, in fact was wearing a lovely pair of heavy trousers in that pattern when we met. And the model above is obviously in a glen-check suit. It is cut, as Kirk’s normally are, with a single button and sharp cutaway, though running round to a regular-length back.
Elsewhere, Miller’s Oath does some lovely accessories and shirts, all using the pick-axe insignia that relates back to the family history. As well as that promise to deliver the best to customers. 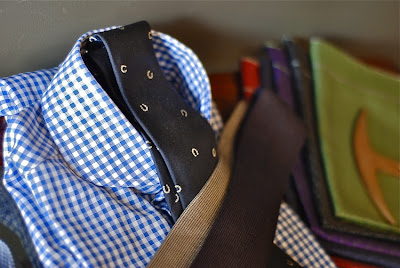 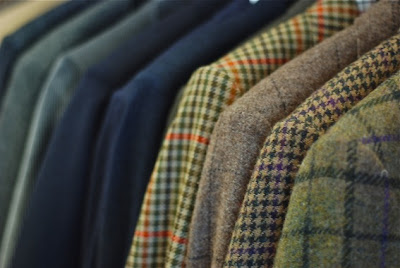 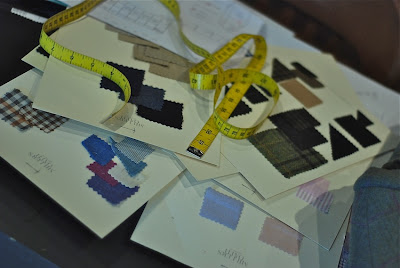 Kirk is not a cutter. He is a designer and a salesman, though there is a tailor on site – basting together a jacket as we talked. The cutting for the custom (bespoke) service is done off site, though Kirk hopes soon to have the scale of business to justify a full-time cutter in the shop.
As we said our goodbyes and I began walking towards the door, a souped-up Jeep parked outside began blaring out music, and frantically turned out of its spot before zooming away. Apparently this neighbour is a rather aggressive driver generally. If there isn’t a sufficiently large space to park, he will just park at right angles to the traffic and leave the car there, sticking out into the road. Such are the pains of living in such a vibrant and, to an extent, still residential neighbourhood.
Kirk and I smiled, shook hands once more and I walked out into the hot afternoon sunshine.

You can follow the discussion on Kirk Miller, Miller’s Oath by entering your email address in the box below. You will then receive an email every time a new comment is added. These will also contain a link to a page where you can stop the alerts, and remove all of your related data from the site.

True. The mean is more commonly used, but the median is more what people expect I think

Hi Kostis, Thank you very much. Most of the time the half belt on the back of a coat is purely decorative, and not designed to be used - even when it has buttons on it. However, sometimes coats are made with functional belts (as…

Bespoke v MTM v RTW doesnt make much difference here really - it's just about the cloth and the slimness. Which of course you can specify with bespoke or MTM, but can control from where you shop for RTW.

It's because I generally like to keep my designs cleaner and simpler, so no box pleat or hanger loop, and I never have pockets on my shirts either. The lack of back photo on the shop is pure forgetfulness. I'll add one later