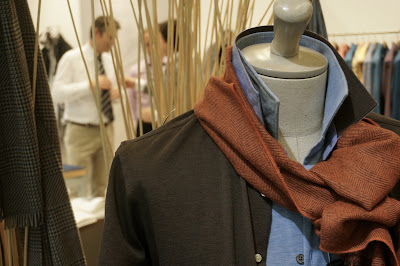 This is the first in a series of posts about producers I met in Pitti and Florence more generally.
Maffeis is part of a family of companies around Bergamo, in northern Italy. Another is Bresciani socks, which of course I’ve visited and written about before. Both companies were founded after the war and are now run by the second generation – Massimiliano Bresciani, who was launching his new underwear at Pitti, and Paulo Maffeis. Both founders are still around and have a particular role in quality control at the factories.

Maffeis employs around 32 people, all making shirts to a range of qualities. Every shirt is hand cut, but the amount of hand stitching varies. That amount is largely chosen by the shop that chooses to stock the shirts – Maffeis is sold in many stores in Belgium, Holland, France and Italy under its own brand, and by several UK brands under their label.
Customers that opt for made to measure in these stores can also pick the amount of hand stitching they want. You can just have hand-sewn buttonholes, what I would call the functional hand stitching (collar, sleevehead) or everything. The price will range from about £200 to £300 with that choice of handwork.
The amount of detail offered to made-to-measure customers is huge. There is no strict bespoke service, with an individual pattern, but things like the collar stand are stated in centimetres and can be adjusted to any height. Like many Italian bespoke shirts, the collar stand is also set to be smaller at the back and larger at the front, to stop the front of the collar from collapsing. 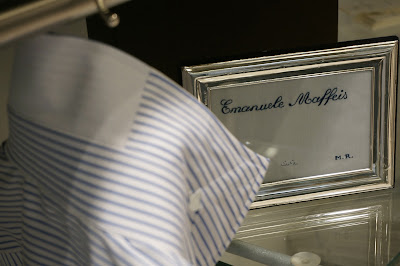 Two little innovations caught my eye too. One was a small section of rougher cotton in the middle of the collar (above) which is intended to stop the tie from slipping and was invented by the founder, Emanuele. Another is the Maffeis boxer shorts (below), which incorporate a small cotton lining at the front to provide a little of the support you get with a brief. I don’t wear boxers, but this solves one of my problems with doing so. 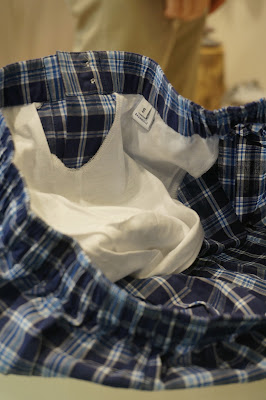 Bresciani UNDERWEAR? Please, tell me more! I am ready to kiss Zimmerli good-bye. I would love for sock and underwear shopping to be one-stop with Bresciani.

Simon, would you consider Maffeis a good value shirt at the low end of the price range, i.e. without all the hand work? I’m looking to replace my T&A stock special shirt for some shirt with a more “italian” collar option.

Maffeis shirts come strongly recommended from my side. Have over the years purchased quite a collection of their shirts; being based in Antwerp, Belgium where they are stocked at Oger store helps, of course. They are now my “standard” go-to business shirt. Particularly love the fabrics, which are rather “structured” in feel, with beautiful finishings at sleeves etc. For those traveling to Belgium or Holland regularly: Paulo visits the Oger stores in A’dam and Antwerp a few times every year for made-2-measure shirt orders. Worth the trip… PS: You can also order shirts from the Maffeis website (or Oger web shop).
Mike

I was wondering what your view on shirt fabric is – specifically the correct fabric to use for a hot/tropical country, such as Brazil. A shirt that one could wear with a suit and tie or even without. On your blogs and others (eg suitable wardrobe etc), i get as far as recommendations for voile and batiste for summer fabrics. However, I’ve chatted to quite a few shirtmakers now and everyone seems to say something different. Voile and batiste run the risk of being too see through, and I have yet to come across any voile fabric that is not see through (particularly as my first super lightweight shirts would probably be white and pale blue). Some shirtmakers have told me to ignore the weight of a twill as its actually more breathable (i still struggle to believe this that much). as for the fabric, perhaps a cotton/linen mix is the best superlightweight option? Would love to know your thoughts. EFN

Personally I’m not a fan of either voile or batiste. They’re not necessarily see through, but I don’t particularly like the texture or find them that much cooler. Lighter weight cottons are normally fine (though often more expensive) or I would go for a linen or linen/cotton mix, as you suggest.

thanks simon. i don’t think linen is an option as will have to be able to wear with suit and tie in an office environment also. that leaves some tropical weight cotton? or said cotton/linen blend…any experience with the latter? recommended? does the cotton do enough to outmuscle the casual look of the linen and afford the wearer formal office attire aswell? perhaps a Q for the men of albini…thanks again EFN

Yes, I think cotton/linen will be formal enough. Or go for lightweight cotton if you’re not sure

We would suggest a Oxford weave cotton for a hot climate or if your budget cant stretch to it how about Monti 200 series cotton or a Thomas Mason 160.

You need to look for a high count cotton in an open weave.

thanks bob. interesting about the oxford suggestion – i always thought these were heavier and less tropical/summery than poplin. the last two would certainly be of interest, as long as they are not too sheer. the high counts are usually front and centre on fabric labelling but how does one tell how open the weave is? furthermore, does two-ply make it heavier and less breathable (physically i imagined so)? thanks!

Yes, it’s a mixture of the weave and weight of the cloth that determines how well the shirt performs in heat. A pique cotton, as used in polo shirts, is not particularly light but it has an open weave. Just looking closely at the cloth is enough to determine that.

Interesting. Picked up a zephyr’ pale blue from emmett which is excellent. Not sheer and much lighter than standard poplins. A wonderful pale blue fabric with a hint of fil-a-fil. Also picked up a cotton linen mix from them as well to try out in the heat. Emmett was very impressiBeing a brit with roots in italy, ive often struggled with most of the jermyn street shirtmakers and their rtw shirtmaking. Emmett seems to be doing the best to bridge the gap. Very impressive. Surprised ive overlooked them until now!

Yes Rob does great stuff. He’s particularly strong on fabric, as you say

I managed to pick up some very light and excellent tessitura monti shirting for the same purpose but was hoping to take it to an affordable shirtmaker to knock me up a couple of shirts for chea. Any suggestions as to affordable places in london where you could bring your own shirting (and maybe even just ask to copy a previos shirt i bring in?). I know its not ideal but we all need to start somewhere and, sadly, full bespoke i can’t stretch to just yet but am keen to start experimenting. Thanks again. bMn

simon,made my first visit to a tailor a couple of days ago .. was a bit of an overwhelming experience with lots of questions asked about various things such as how much shoulder or chest i like etc .. i tried to answer as best as i could but tbh not sure what i like till i see it if that makes sense. when i come to the 1st fitting .. would i be able to change things like the shoulder/chest/dimension of the armhole at this stage or is it too late? not sure if youve written about this in any of your posts already. thanks, andy

Sounds like they don’t have much of a fixed style, and dictating that can be tough. You should be able to change almost everything at the first fitting, but not much at the second. Maybe bring in some pictures or other suits you like to help give them an idea?

Definitely my fav RTW shirt. Maffeis evokes that Italian 1950’s nostalgia (I have in my mind) I’ve heard their polo t shirts are fantastic too. Do any of you\Simon know any stockists? Regards

No one carries them here, apparently they’re not that popular.

But you can order through the agent, Maurice Greig: [email protected]