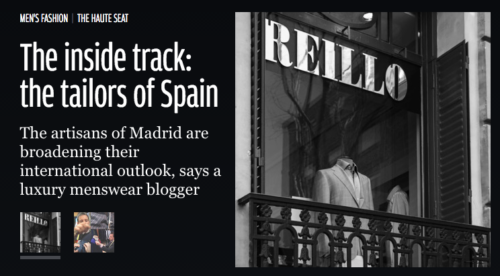 In the past year or so, having got to know a few of the Spanish tailors a lot better – and having had things made by them – I have become very fond of their attitude, their openness and approach to catering to more international clients.

Hopefully that comes across in my latest column for How to Spend It, the luxury supplement of the Financial Times. You can read all previous articles, including practical tips on how to buy quality in everything from suits to bags, here.

(Apologies this question is not related to your recent post)

I am about to commission a new dinner jacket, trousers and waistcoat and I am tempted to go for midnight.

My dilemma is as follows:

On the one hand, and as I think you have commented in previous posts, I think blue is simply more flattering than black to someone like me with a pallid British complexion. On the other hand, does midnight risk being faddish or showy?

Whilst midnight seems to have been popular of late, (most RTW names seem to have midnight offerings at present it) my tailor reassures me that midnight has been used alongside black since Henry Poole first created the short coat for the then Prince of Wales, he has even speculated that this first dinner jacket could itself have been midnight.

If I were to take the midnight route, I would go for midnight grosgrain facings on the lapels rather than black (as I often see) as I think the black lapels really highlight the midnight as blue. I think keeping the whole lot midnight is a little more subtle.

Keen to hear your thoughts.

PS. I know a dinner jacket ‘should’ have no vents, but do you think a double vent ought to be considered – I think it would hang better but is it less formal?

Hey,
Midnight is certainly not that modern, as you say, but could still look that way to modern eyes. Do look at midnight grosgrain, as that is where the contrast sticks out, yes. And ignore advice about no vents on black tie. Fine to have them…
Cheers

I love the idea of lapels shrinking or growing 1/4 of an inch each decade. Such a great example of the subtlety in classic menswear styles.

I think you're right Sean, though worth noting it's not a big difference and doesn't increase over time - when knitting something like this the makers are very aware of risks like that, which is why this is knitted a bit more openly and so…

I know what you mean James. Covid is certainly not the threat it used to be, but there are a good few people with colds - perhaps we'll be come a little more protective about ourselves when it comes to those kinds of illnesses as…

The steamy social experiment that is a PS party

You might be interested in Thom Sweeney, who do a very soft shoulder but with a slightly sharper cut elsewhere. Otherwise I'd recommend Dalcuore or Solito