Friend and author Bruce Boyer recently penned a startlingly ambitious piece on the importance of clothing, for US Catholic journal First Things.

I have obtained permission to reproduce a section of it here.

It argues that caring about the way we dress, with consideration of the people and events around us, is no less than necessary for an appreciation of life.

And further, that a society which does not will never be one capable of humility or equality.

Whether you agree or not, it makes some powerful and eloquent arguments. 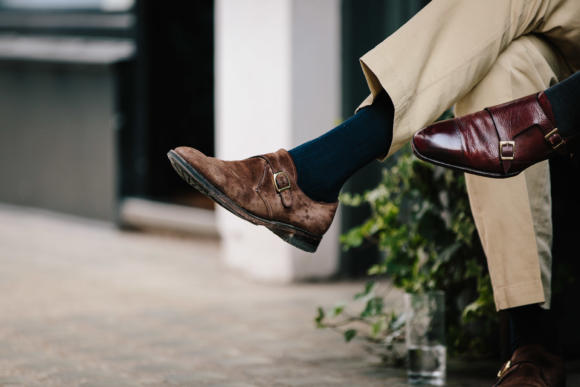 In the early years of the nineteenth century there had been what fashion his­torians have called the “Great Masculine Renunciation” in Western male dress, as men turned their collective backs on all the silks and satins, buckled shoes and powdered wigs of court dress, and assumed the Victorian black worsted suit and cotton shirt of bourgeois middle-class business attire and propriety.

The theory, first popularized in 1930 by the psychologist J. C. Flügel, attempted to account for the radical shift that men made to more sober attire after 1800, and the shift is usually seen as an expression of the triumph of the middle class, ­enlarging democracy, and the Industrial Revolution.

A more ornate and chivalric ideal was replaced by the modest masculinity of a bourgeois gentleman in a democratic society. A gentleman’s clothes became more sober and standardized, his manners more reserved and proper. The very idea of a “gentleman” seems stuck in the nineteenth century.

At the end of the twentieth century, dress underwent another great change; call it the “Tailored Renunciation” or the “Casual Revolution.”

Underlying it is not the triumph of one class but rather the loss among all classes of a sense of occasion.

By “occasion” I mean an event out of the ordinary, a function other than our daily lives, an experience for which we take special care and preparation, at which we act and speak and comport ourselves ­differently—events which could be called ritualistic in matters of ­propriety and appearance.

There used to be many of these events, social rituals that filled our non-working lives: weddings and funerals, going to church, restaurants, parties, and theaters.

Meeting important people of various stripes, people who had greater social standing than we did, was an occasion for our parents and grandparents to dress up, and that included going to the doctor’s office when you were sick, because the doctor was thought to be an important person worthy and deserving of that outward sign of respect.

Respect for the event and those in attendance was what made the occasion special.

It can now be said that this sort of an outward sign or almost any of the older outward signs of ritual are considered pure snobbery. After all, wasn’t the Edwardian Age the last time the really rich could hope to think that showing off their wealth in public display gave the poor a nice bit of entertainment and ray of sunshine in their drab lives?

But then, if these outward signs are socially discouraged today, what makes an occasion special? And how do we know? Can an event be an occasion if there’s no attempt to outwardly manifest it? ­

Ritualized behavior of one sort or another may be considered an outward sign of our inward disposition. But how complete can this be if it is not expressed in our appearance? We need not agree with Nicolás Gómez-Dávila’s claim that evening dress is the first step toward civilization to think that something has gone amiss.

Is it possible to believe that when we now wear polo shirts, khakis, and hyper-designed athletic shoes to weddings, funerals, and graduations, it’s a sign that we have forgotten how to enjoy the events by which we measure life?

Occasions are shared public realities, rituals in which we recognize something other than private expression.

C. S. Lewis thought about this idea of occasion in terms of solemnity.

For Lewis, solemnity is a public joyous propriety in which we humbly give up our private selves to the ritual: “The modern habit of doing ceremonial things unceremoniously is no proof of humility.” Wearing one’s Sunday best, as much as kneeling, was a visible sign of a humble heart.

If Lewis is right that a sense of occasion encourages humility, we should not be surprised to find that a society that no longer wants to dress up also gives more leeway to the strong than it does support to the weak.

The full piece, available here, also includes a nice potted history of casualisation during the past century, and is worth a read.

Photograph: Myself and John Happ of Alden, shoes side by side. By Jamie Ferguson @jkf_man

You can follow the discussion on Clothing shows we care by entering your email address in the box below. You will then receive an email every time a new comment is added. These will also contain a link to a page where you can stop the alerts, and remove all of your related data from the site.