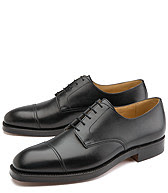 –
The brands stamped on shoes aren’t always what they seem.
Here’s a tip if you are out picking shoes in the January sales. Two of the most desired brands of English shoe, Edward Green and Church’s, can be found cheaper under other brands. Brooks Brothers, that repository of American tradition, has a range of ‘fine English shoes’ under the label of Peal & Co. These are actually made by Church’s for Brooks Brothers, rebranded and resold. Peal & Co was an original family shoemaker, but was bought by Brooks in 1964 and outsourced. (The pictures above are of Peal & Co black derbys, left, and Church’s black oxfords, right.) Equally, Ralph Lauren has a luxury range of footwear in its Bond Street store that is made by Edward Green.
(This makes sense if you think about it – Brooks wants to sell English shoes made to a high standard but is hardly going to set up its own factory.
As a parallel example, Gucci is a saddlery maker by tradition and Ermenegildo Zegna a master of wool fabrics. There’s no reason they would be any good at making sunglasses. So like many brands that have expanded outside of their core area, their sunglasses are made by one company in northern Italy – some don’t even design their own sunglasses, but have that done at the same one factory as well.)
More on why this RL/Brooks knowledge can save you money tomorrow…

Churchs were bought by Prada some three to four (?) years ago. Consequently, the quality has fallen.

You’re right about Purple Label – – Edward Green. Best deal out there when they’re on sale.

And, by the way, the shoes on the left are Derbys (or Bluchers), not Oxfords.

Good point Bastel, thanks for that. It has been changed.

Shipton & Heneage’s premium grade line is made by C&J, or so I’ve been told. If you study them closely enough, you can spot the similarities in design.

Laguna Beach Trad is correct. On a recent trip to the C&J factory in Northampton, England, I purchased a pair of brown loafers stamped for Shipton & Heneage.

I had been buying black cap toe Oxfords for years at Church’s when sometime ago the salesperson informed me I could only get my size in a D, not B, width. I find I can still occasionally get Peal’s in my size. I hate to think what will happen if this ceases to be the case.