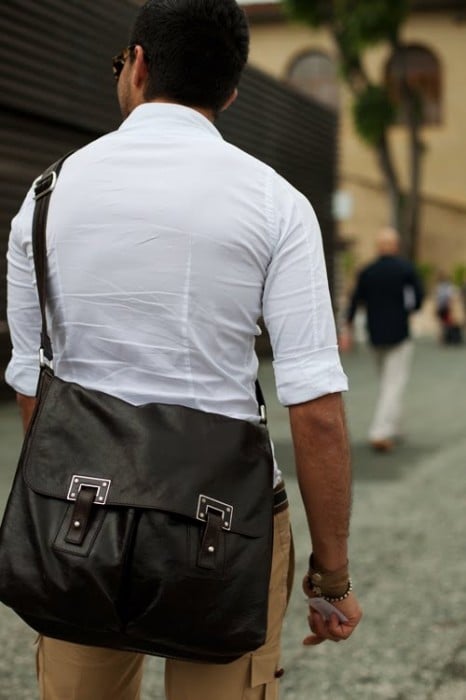 I used to have a few shirts that I really liked but which did not fit especially well around the waist. They were bought in the days when I knew a lot less about fit and cloth (hard to imagine, isn’t it?), and while the neck, shoulders and sleeve were fine, the cut was simply too full from the chest downwards.

Such were my frustrations, I may have thrown them out. So instead I decided to try and sew my own darts into them, to narrow the waist. If I messed it up, I could just throw them away anyway.

My first attempt went surprisingly well, but there were a few lessons learned. I should have tried a couple of variations on the shape and size of the darts before I sewed them in. I should have been a little less cautious on their length. And while they held up very well in the wash, I learned it was worth sewing as tight stitches as possible.

I think I’ve now got a pretty good system, and all those shirts have been darted, worn and washed several times, to pleasing effect. I could have had it done at a tailor, but not being in essence a practical person, it is very satisfying to master a skill such as this. And it probably saved me £100. Here is my step-by-step guide to putting darts in your shirts. It is not that hard, and very satisfying when completed.

1. Lay out your shirt on an ironing board. Pinch the material in two places, roughly where your waist would be and a couple of inches in from the seam on either side. Start with a fold of a couple of centimetres, folded out towards the seam. Iron that patch flat and then fold the material above and below, pulling the material away gradually so it forms a crescent.

2. Pin both folds with three pins or needles each, to keep them in place.

3. Try the shirt on, being careful that none of the pins point inwards. Assess how suppressed the waist is by pulling the sides away from your skin, and try sitting down, stretching etc.

4. If the fold needs adjusting, take it back to the ironing board and fold the material more or less. Also, if you feel the dart could or should be longer, narrowing more of the shirt’s body, then extend the crescent above and below.

5. Sew the fold in place, starting with a few stitches in one place (on the inside of the shirt so it doesn’t show) and then sew smallish stitches, in and out up the fold, and finishing in the same way.

6. Use white thread unless the shirt is one block colour – and look closely, most colours are a mix of a darker colour and white.

7. Don’t worry if the stitches seem far apart. They will hold up well – and they don’t have to be as tight as the ones that construct the shirt itself. (You could of course do this on a sewing machine as well if you have one. I don’t.)

If you find it hard to iron the crescents (I found it the trickiest part) you can always start the fold halfway down the back of the shirt and just carry it on off the bottom of the tail. This will create a flap on the bottom, but if you have your shirt tucked in most of the time, this won’t be a problem. I found this particularly useful on a Ralph Lauren blue oxford, which although “custom fit” was still far too broad. The thicker material made it hard to fold accurately.

I’m sure some of you are proficient sewers, and all this is the equivalent of teaching your grandma to suck eggs. I’m sure others are horrified at the idea of amateur tailoring. But I found it very satisfying (a step up from hemming my trousers) and I encourage you to have a go.

Oh finally someone who has the sense to give things a try.

All things that can easily be remedied. However I do admit that I would not try these “operations” without a sewing machine, though luckily I do own one of those.

So I can only “second that motion”. Give it a try. You might well be surprised by the excellent results that you achieve.

Now as to “amateur tailoring”:
Don’t think just because you are quite capable at making a few minor alterations, that you would be equally as capable of making major changes or creating well fit clothes from scratch. I have tried taking in a sports coat myself after loosing some weight. Let it be said: “This was a mistake”.

Well: you win some and you lose some 😉

Thanks Simon, you just saved me a lot of money…!

I was about to throw out about 30 shirts I brought over from the U.S. which all have the waist made for a walrus (why do they make them THAT large?) So I’ll try this out, because like you I enjoy learning to do a few things here and there.

BTW, you did a piece on hemming pants? I couldn’t find it.

Great post. Could you advise on what type of stitching to use? I was thinking backstitch.

I used a tight running stitch, but yes that could work. Key is not to cinch the cloth at all

spent Sunday PM tailoring shirts by putting in darts having lost a bout 2 stone. brilliant – like having a new wardrobe. thanks

Would you mind explaining the use of darts in jackets? If you buy bespoke can you request not to have them?

I’m of average height and a fan of simplicity so thought that dartless jackets would help to elongate my torso visually.

What are your thoughts?

Sure Rhys
Darts are used to give shape to a jacket; they are not style features. There are different dart techniques and placements, but I wouldn’t recommend going without them for style. You can elongate the torso in other ways – or usually better, elongate the legs. (Socks matching trousers, higher waist etc)

Thanks for your quick and eloquent reply Simon. I’m a big fan of contrasting colourful socks look but I should be realistic, I don’t have a tall models body so should take your advice 🙂
With large pattern jackets, can darts affect the pattern matching around the dart?

Yes they can, but again that inevitable. I wouldn’t have it as a reason to avoid darts

Good article. I made a video tutorial about how to sew darts in a men’s shirt. Check it out! https://youtu.be/f1jn2Ae08gk

Hey Simon. Curious. If two shirts have the same waist circumference but one is darted and the one not, would there be a difference to how they look at the back when worn (ie one more poofy in the back than the other)?

Not necessarily more poofy, no, but darts give you the ability to control where the fullness goes. Without them, you can only control the fullness by altering the side seams. With them, you can gather it more in slightly different areas. That can be useful if you have a back with a slightly unusual shape, eg very prominent shoulder blades.

I wonder if it is possible to remove darts from an shirt that is too tight in the body without destroying it?

I have som nice bespoke shirts that unfortunately were commissioned when I was smaller than today. .

It should be possible, yes.

Simon, which way should darts face when ironing? Inward (towards each other) or outward (towards the side seams)?