A while ago I wrote about the absence of good cobblers in London. Not someone who glues new soles on, cuts keys on the side and might possibly do your dry cleaning, but a cobbler that knows and takes an interest in the craft of repairing shoes. I remarked at the time that there seemed to be a similar problem in New York – few people could name a decent cobbler to me. And since then I have asked in John Lobb and a few other high-end cordwainers here: no one had any bright ideas.

It seems it’s a universal problem – the proliferation of the Timpson-style one stop shop and the disappearance of the real cobbler. 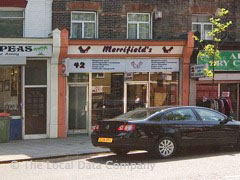 I bring it up again now because I’ve found one. Finally. It’s called Merrifield’s, and is located near East Dulwich station in south London. I’m sure there are others tucked away in nooks of major cities, (I believe last time someone suggested one near Old Street) but this guy is good and actually quite close to me.

Why I was looking in the City, where the principle of capitalistic efficiency has swept away all knowledgeable manufacturers that don’t class as luxury, I don’t know. Look local, where customer relationship and loyalty is still possible, nay profitable.

I was originally searching for a cobbler because I was searching for tongue pads. A mythical piece of padding that glues to the underside of your shoe’s tongue, it is the ideal solution for men with low arches, who find it hard to get shoes that both have enough room for their feet and enough grip across the top to keep their heels in place.

They didn’t sell them in Merrifield’s either, but then that’s not the owner’s fault; he’s not a manufacturer. You just can’t buy them today. So he makes them instead. Two odds of leather, some padding and a little glue; all of a sudden my laces have purchase.

In fact, he replaced the tongue entirely because it was simply too thin to provide any support. This he was disgusted with. I didn’t mention they were Brooks Brothers’ Peal & Co. Or how much they cost.

I particularly recommend this solution for anyone who has bought shoes they thought fit them well, only to discover that after a few months of wear and softening leather, the shoe has expanded beyond them.

I also recommend Merrifield’s. I’m sure the number of readers that live within convenient distance of East Dulwich is small, but it’s worth a stop if you’re one of them.

I seem to have the opposite problem: the sole of my foot fits well into a given shoe, and the dimensions of length and width are appropriate, but my foot is too shallow and as such I need to use insoles to lift my foot enough to have a decent fit when the shoe is tied, otherwise a shoe which fits in other ways is simply loose, while going down a size compresses my toes uncomfortably and is typically too short. As always, your blog is my preferred way to start the day: if only you did this full-time!

As it’s been some years since this post originally went up, have you been able to find anyone comparable within Central London (East London even better) Simon?

Hi DKP, I too live in East London – is there any chance you’ve found someone?

I’ve done all of my shoes in a cobbler right besides coop in canning town… forgot the name, it’s James shoe care or something similar.

This is a rather late follow-up comment (after almost 10 years): does anyone have any experience of Mr. Merrifield as a bespoke shoe maker?