It’s getting pretty exciting now. Probably the penultimate fitting for my double-breasted suit from bespoke tailors Graham Browne. And as you’d expect, there are plenty more technical details to get into.

I was broadly satisfied with the jacket when I tried it on, but I had asked for the middle button to be moved an inch lower – so that the fastening is exactly on my waist and the sweep of the lapel a little longer.

To my eye the initial lapel was rather stubby and short, but more than anything I think this shows the current trend to ultra-long lapels. The standard distance from shoulder seam to lapel is 3.5 inches at Graham Browne. Mine was already reduced to 2.5. Any less than that and the lapel sits away from the chest, with the point running across the shoulder and sometimes actually in mid-air. Tom Cruise and others have made this look popular, but then we’re not all that short.

In the first image below you can see how the jacket and its lining are stitched together, and see the distance of the lapel point from the shoulder seam.

To roll the lapel and inch lower down, as mentioned, Russell ironed it over – pictured below. Of course, as you roll the lapel across so that it buttons lower down, the point shifts up anyway – by virtue of becoming more vertical. So there is extra height there as well.

In picture three you can see where the lapel point moves to as a result of this adjustment – it is the chalk mark just above the lapel on the right. Not a big adjustment, but worth it nonetheless. 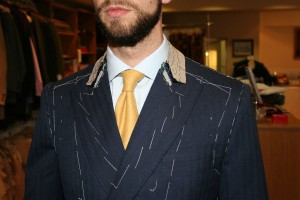 Russell also took in a tiny bit at the waist, around 3/16 of an inch, and a nip in the drape, just under the armhole. You can see both those adjustments in picture four – where the two pins have been inserted vertically.

Finally, as mentioned in my last post I decided to have the sleeves a tiny bit shorter. My shirts from Hong Kong might have shrunk ever so slightly in the wash, but no matter – they’re the only formal shirts I have so the jacket sleeve has to be a little shorter as well, to reveal a quarter inch of linen.

Russell wanted to shorten the sleeve by 1/8 of an inch. Possibly 3/16. But I held my ground and pushed for ¼. All this over such tiny measurements.