As anyone who has been fortunate enough to visit Milan will tell you, the city is not all fashion. There are several old and new stores worth the visit for those interested in classic menswear.

By reputation, the city’s three stand-out establishments for tradition and quality are Bardelli, Neglia and Tincati. However, each offers something quite different – as I discovered recently.

Neglia is the destination for Milanese men looking to the best in English and American imports. So the shoes are Church’s and Edward Green, the umbrellas and the bags from Brigg, the suits in the window from Ralph Lauren, and half of the ties from Drake’s. So while there are also top-class Italian names like Brioni and Kiton, and Neglia’s new and expanded own-label suits, the shop does not offer much to the international visitor that he can’t get elsewhere. The one exception is probably Incotex trousers – their cords pictured below. 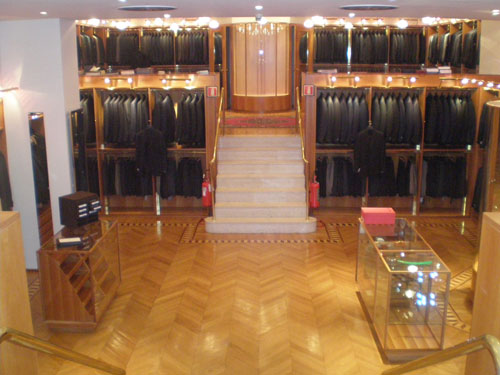 M Bardelli is very different. One of the oldest men’s clothing establishments in Milan, it could safely claim to be the definition of Milanese style – classic, formal, with heavy English influences. Particularly prevalent (this season at least) are sports jackets in grey and brown checks and strongly striped shirts. As well as woollen ties in club stripes, which are ubiquitous for Autumn/Winter in Milan. While not necessarily inspirational, it is the base from which Milan can be understood.

Tincati is smaller, more refined and idiosyncractic. Very lightweight raincoats, woven belts and soft thin knitwear, it also has a dedicated area at the back from bespoke orders. Certainly worth a look.

Of more modern, quirky establishments, Al Bazar is the standout. Located outside the centre (a couple of streets from Bardelli), it is a treasure trove of items collected under the aesthetic of one man – Lino Leluzzi. More on Al Bazar on Permanent Style next week.

The greatest joy, however, is discovering less well-known shops. Like Piombo, just off the Golden Triangle, which had the most lovely unlined, washed cashmere green blazer (and one of their colour combinations is below). Or Rivolta, the old Milanese shoemaker that has recently relaunched with a model for making bespoke shoes purely off an electronic scan of your feet (a longer feature, again, is on Permanent Style). Larusmiani is also worth a look. It is an ultra luxurious menswear store on Via Montenapoleone that reminds me of Kiton before it grew. An old name in Milan, it is surrounded by fashion houses but retains a very particular character. 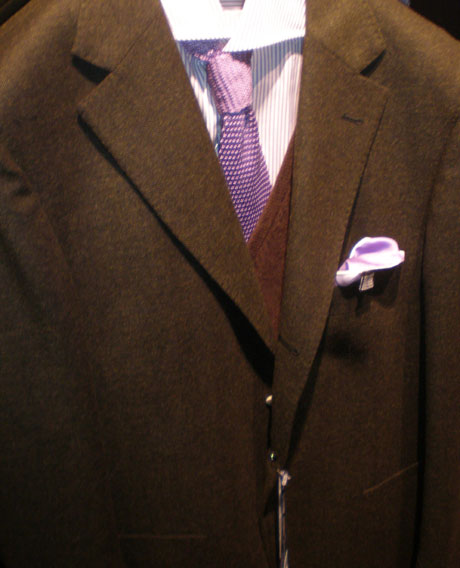 Anything else worth mentioning? The Etro sale store on Via Spartaco (50% of this season, 75% of the last); absolutely gorgeous and well-cut knits at Red and Blue, which looks more like it is called Fedeli (the brand of clothes sold); and Doriani for similar knitwear reasons. Oh, and go have lunch in the café at Corso Como (below), then wander around the shop inside – a great menagerie of brands.

It was also two days, but it feels like there’s so much more to tell.

Nice to have shop window pics Simon – gives a good idea of what’s in focus in the season. any more? Did you notice any preference for flatfronts or pleats or was it mixed?

I’m afraid that’s it, SS. I was running between meetings!

Definite preference for pleats among the older men and shops (Bardelli) and flat front among the young.

Hi Simon,
Congratulations for your wonderful blog.
I go to Milan quite often and I agree with you about the shops you visited.
Nevertheless, Florence is much more elegant.
By the way, did you manage to visit the Brioni workshop in Via Gesu?.
Un saludo

Theres a shop just on the adjacent corner to the Museum of Natural history that has great 1000 euro suits .These are really worth checking out.Can’t remember the name. That aid I’ll continue getting great stuff in London even though I live in Milan. The best out o Milan and Florence …well I’d say Florence but lets be fair who wants to pay these make believe fanasy prices in Italy.
I had a Pizza out yesterday not that great and with a crap beer 20 quid not in the centre either but in Brianza. Thats an example of the way it is.This includes clthes as well.

Where can one find Doriani knitwear on the web?

Hi
Congratulations for your wonderful blog.
I go to Milan quite often and I agree with you about the shops you visited. I like this post thanks you are sharing a great article information

I actually live very close to Milano and is impressive how in 2 days you managed to find all my favourite shops 🙂 altough is not too difficoult ,u just need to stop a nicely dressed man and ask him where he shops he’ll tell you exactly those names! Unlucky Italy is known now for the mainstream brands who produces (quite frankly speaking) zara quality for the price of savile row! Prada Gucci and so on in man’s fashion are just terrible !

There are some small shops who has a very nice collection from brands as boglioli tagliatore barba and so on but is defenetly bit more young-ish (altough in italy are now very popular) ,

anyhow just wanted to tell u great job, i adore your blog and i’m learning so much about suits that i didn’t know (i’m only 26 come on 🙂

PS aviod Corso Como 10, is filled with soccer players in destroyed jeans and 500 euro’s orrible tshirts 🙂 if you want to hang out there are much better places to be!

PPS if you’ll ever visit Torino post it in advance i’ll suggest you everything about the city!

Vittorio,
Could you suggest all the noteworthy shops in Torino, please?
Thanks!

vittorio tell me about shops in torino as I think itr may be a bit more interesting than Milan. To be honest lòots of Milan shops have stuff you’ll find in Marks and Spenxcer but five times more costly. I like davis by the way but they are far too dear. Recently that had sopme great sports jackets in dogtooth but at nearly 600 pounds not maDE TO MEASURE.Thanks in advance.(I live in Milan)

Hi John, If you are storing winter cloths away make sure to protect with moth deterrents most important. Dry cleaning will remove any oils grease food stains which the moth is attracted too. Maintence is the key to protect your investment in these garments.

Video: Maintaining and caring for your suit

Subtle vs showy: A way to think about casual clothing