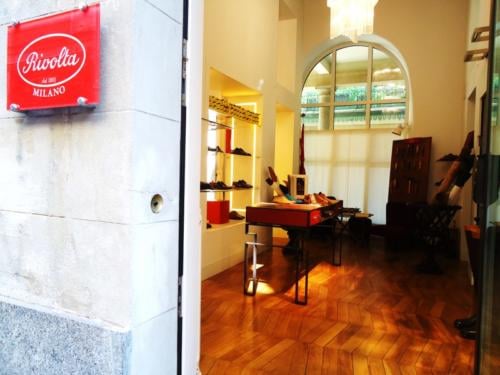 Milan can easily be underrated by men who love classic style. Given the choice of Italian cities to visit, they would always pick Naples – the home of soft tailoring, that very distinctive shoulder and companies like E Marinella and Kiton (not to mention all the dozens of smaller, local tailors). Even Rome, the home of Brioni and the original Caraceni, often gets more attention. Milan can easily be dismissed as the (albeit worldwide) centre of ready-to-wear, disposable fashion.

It deserves better, if only for houses like Bardelli, Larusmiani and Al Bazar – which mix the traditional, luxurious and idiosyncratic sides of Italian style respectively. But it should also be known for its shoemakers. In particular, the very traditional firm of Rivolta.

Sitting on Via della Spiga, in the centre of fashion’s Golden Triangle and surrounded by Roberto Cavalli, Dolce & Gabbana and the rest, Rivolta is quietly trying to start its own little revolution in men’s shoes.

Rivolta is an old, Milanese name. The company was founded in 1883 and survived both world wars making bespoke shoes for a strong, loyal client base. But it was forced to close down in the 1970s under pressure from mass-market producers.

Then in March this year, it was bought and relaunched by the son of the Rivolta family. He fitted up a new store in Milan, complete with a mini-museum of old Rivolta shoes. He found an artisan factory outside Florence to begin making Rivolta shoes again on the classic round-toed shape that was the firm’s trademark. And he did something a little bit different – he installed an electronic scanner that would enable Rivolta to make bespoke shoes in an entirely new way.

Shoemakers have many different ways to produce shoes that fit. Ready-to-wear shoes usually come in several different ranges, all on different lasts and so different shapes – some will suit men with wide feet, others will be best for those with high arches. Those lasts will come in different sizes – better shoemakers will have more variations in size and in width.

Bespoke shoemakers, on the other hand, trace your feet onto paper, measure them and produce unique lasts (shapes) that are used to create shoes. You will have more than one fitting, often with a half-made shoe that can be tried out before the final pair is made.

Finally, some shoemakers (such as Lodger) try to combine aspects of the two – the shoes are not bespoke, but they come in many different sizes, and an electronic scanner is used to measure every aspect of your feet to find the right last, length and width.

Rivolta is different again. It applies the same scanning technology but uses it to create a personal (plastic) last. That last is used by shoemakers to create bespoke, handmade shoes. No fittings, no paper measurements. Just bespoke shoes in 40 days, for around €1400.

Customers can pick from several different colours of leather, and between calf, suede, patent and cordovan. There is also a tumbled calf that the firm refers to as its English leather, and a waterproof suede. You can pick from Goodyear-welted, Blake or Norwegian (where the welt is sewn to the outside of the shoe).

There are several different styles, including two Oxfords, a Derby and a monk. The shape is quite classic and round – redolent to my eye of the Budapest shoe made famous by Vass. There is also a new last being introduced soon. The shoes are all hand-clicked, lasted and finished, with the welting done by machine.

Although still a little clunky, Rivolta also has a floor-to-ceiling computer screen that allows you to select your colour, model and leather, and see it transposed onto your feet.

Now critics will say that bespoke shoes need fittings. As I have written on my blog Permanent Style in the past, there are men that have their own last made (usually at Springline in the UK) and use independent closers and makers to make their shoes for them. This is usually cheaper than full bespoke from Cleverley’s, Lobb or someone else. Plus you have your own last that you can take elsewhere.

The problem is, it takes a while to get that last right. It usually takes one or two attempts with a half-made shoe, and resulting tweaks to the last, before you can find a perfect fit. Just like having a suit made: bespoke means fittings, often a few of them.

So can Rivolta’s scheme work? Well, store manager Elena Invernizzi says they have had several very happy customers already, some of whom had had full bespoke shoes made in the past. So the method is obviously living up to some people’s standards. Personally, I’ll wait until I try it myself – or know someone that has. In the meantime, plaudits to Rivolta for a brave and innovative move in men’s footwear.

[I have also since been informed that you can see the Rivolta machinery at work here: https://www.youtube.com/watch?v=dKzmhxFRaJI]

Last shoes I bpoughtin Milan were £500 pound from a shop in Montenapoleone. I vowed never to spend that much again because to be honest they are o different to what you might get in the Uk in a good shop, no tell a lie they are far more ordinary. The Milanese really scruffy today as are most Italian men in mostItalian cities . The fame they had as great dressers is gone. You are even hard pressed to find somewhere decent to eat. The cheapest is about 30 pounds a head and thats like six time J.D.Wetherspoon for the same level of food. To anyone interested its much better in London believe me. I live on the road between Milan and Como and I can’t name one place where I could take a visitor and pay lets say $60 pound a head and be impressed. The Shops are really boring as well, far more happening in the UK and USA as regards fashion. When I cme back with stuff from Piccadilly I’m deluged with requests from Italian friends.Thats it. BUT you can go to Piazza Venezia and buy a suit for a grand off the peg but its a grand

Honestly I don’t get the business model, in Italy and not only there you can get full bespoke for that money.

Sure you can get some places doing bespoke for that money , only trouble is I haven’t found a shoe place doing it.But I don’t doubt you.But look at this , what would you rather have
PAUL SMITH original Oxblood suede brogues at 250
or Lodger bespoke for £500
or the more trad brown suede (most of it is that) from a top Italian shoe place but a shop nevertheless for £500?
Lots more happening in London believe me at half the price.
Walk round Milan you’ll get te picture quick

Thanks for your comments. In answer to one of them, I welcome comments and they are valuable for readers to get different points of view. Thank you.

I was in Milan last week (post to be up this week) and found much to admire. But then that is always easy to do that in a city not your own.

Oh, and Lodger is not bespoke, it is ready to wear or custom ordered.

Pabloj, if you know somewhere in London where you can get full bespoke for 1000 pounds, please let me know.