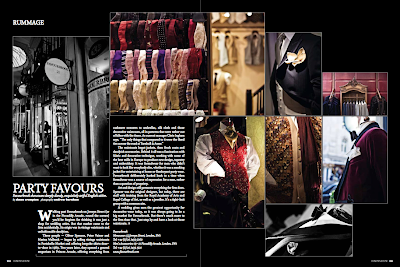 Walking past Favourbrook on Jermyn Street (or in the Piccadilly Arcade, round the corner) you’d be forgiven for thinking it was just a shop for wedding attire. But that market came to the firm accidentally. Its origin was in vintage waistcoats and unfashionable dandyism.

Three people – Oliver Spencer, Peter Vainer and Marina Wallrock – began by selling vintage waistcoats in Portobello Market and offering bespoke shirts door-to-door in 1989. Two years later they opened a general emporium in Prince’s Arcade, offering everything from cashmere sweaters to umbrellas, silk cloth to those decorative waistcoats, all in patterns that were rather out of kilter with the times. As current manager Chris Ingham says “the only thing that compared to it was the floral ties across the road at Turnbull & Asser.”

The waistcoats begat jackets, then frock coats and dandyish accessories. Behind it all was a fascination with fabric and decorative technique, working with some of the best mills in Europe to produce new designs, tapestry and embroidery. It was formal wear for men that didn’t want to look like everybody else, whether that was a smoking jacket for entertaining at home or flamboyant party wear. Favourbrook deliberately harked back to a time when formal wear was a source of expression for a man, rather than a question of propriety.

Art and design still permeate everything the firm does. Spencer was the original designer, but today there are staff with training from the Royal Academy of Arts and Royal College of Art, as well as a jeweller. It’s a tight-knit group with a common aim.

A wedding gives men the greatest opportunity for decorative wear today, so it was always going to be a big market for Favourbrook. But there’s much more to the firm than that. Just stop by and have a look at those waistcoats.

I always wear a Favourbrook single-breasted waistcoat. I desire more!