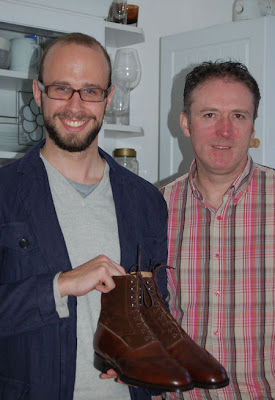 I have written previously about the boots being made for me by Cliff Roberts, an old hand of Northampton shoemaking who started making his own shoes from his conservatory recently. Well, I finally took delivery of them this past weekend.

Cliff was kind enough to bring them down to London personally, partly to compensate for an inability to source a tool for securing the speed hooks, which had delayed the process by a couple of weeks.

I was immediately impressed by the quality of the leather, which was very soft and supple. In particular, the leather lining and suede in the upper half of the boot was especially malleable. The finishing was also impressive, with Cliff taking the time to put my initials, as well as a pattern of arrows, in the heel with tacks.

Cliff’s lasts are slightly wider than average for the various fittings, so my size of 8½ E and 8 F came up a little bigger than I expected. As Cliff points out, boots do need a little more room in order to get the foot in easily – and the high fastening ensures that there’s no chance of any slippage. It’s marginal, but I should perhaps have gone with a D and E.

This is one of the obvious drawbacks of having shoes made remotely: you can’t try on a range of sizes and pick accordingly. Then again, I have frequently bought the wrong size in ready-to-wear shoes in the past even after trying them on.

From a construction point of view, the beveling of the waist on the boots and the greater support for the instep both make a big difference: touches that remind you of bespoke shoes rather than ready-to-wear.

Talking of bespoke, Cliff is considering launching a bespoke business next year, with lasts being made by Springline and being used to make ‘sprung’ or ‘braced’ trial shoes that can then be tried on by the client, and used to adjust the last. Cliff has tried to make shoes direct from a last that has been created by scanning a client’s feet, but the fit is never quite right. As I wrote previously in two posts on finding cheap bespoke, others’ experience shows that bespoke shoes are more a question of trial and error. So Cliff’s service should work well – and after the initial outlay to have a last made (around £230) the price of the shoes would be the same.

Some pictures of the hand-bunking, inking and toe tacks below. I’m off to put the boots on again; they really are very nice. 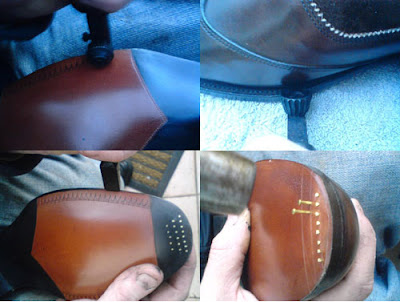 Raising my glass now in honour of Cliff! 🙂

Enjoy your boots, and let us know how they are breaking in.

Feel free to contact him yourself, email address is [email protected]

You’ve used Cleverley and Clifford. Would you be able to objectively point out the key differences in fit/finish between both pairs?

I’m aware, of course, that Cleverley probably uses a better grade of leather, and has a finer operation overall. But what else, in your opinion, distinguishes the shoes?

The two are very different – Cleverley used a bespoke last and were entirely handmade. Cliff is better compared to the special order services from other Northampton makers

Nice to see a photo of you before you upped your game in the casual wear dept. 😉

Is Cliff still doing bespoke? From your perspective now Simon, I don’t think you would commission another pair, right? You said these shoes didn’t quite hold up quality-wise. And based on the photos the bottoms doesn’t look too pleasing…

Probably not, but it’s been a very long time now. I don’t know if he’s still doing it or what the quality is