Twelve weeks ago I commissioned a pair of boots from Cliff Roberts, a shoemaker from Northampton who used to work for one of the big outfits there and is now based at home. He makes handmade shoes (lastmaking and closing is done externally, the sole sewn on by machine – but everything else done by Cliff, by hand).

The production and timeline can be a little erratic, given it is just one man making the shoes. But previous customers report excellent quality, fit and materials. And they look pretty darn good too.

Another advantage is that Cliff will send photos of the work-in-progress, taken by his wife. This always adds a certain something to the process of commissioning clothes. I have reproduced some of these below.

And as the shoes are custom-made, you can of course have them in any size, material or design (on one of Cliff’s two lasts). I went for an Oxford boot, in brown calf with the upper sections in suede. There is a wing-tip to the boot but no brogueing. The division between leather and suede is gimped, but not the wing-tip. I also specified the painting of the sole and the position and pattern of its nails. The two boots are a half size different, and different widths.

Oh, and I’m having my initials punched onto the sole. Because I’m just that shallow.

The first two pictures, below, show Cliff marking out the patterns for the uppers.

The next two show Cliff cutting out the leather for the uppers (clicking) by hand.

Next, Cliff hand-punches the eyelets in the boots.

The uppers are lasted onto the wooden lasts by hand, securing the leather at every stage with nails.

Next the leather toe puff is secured in place and side stiffeners added.

The thread for sewing the welts is prepared and waxed.

The welt is then sewn on by hand.

Finally, here are the boots at their current stage, without soles or heels. 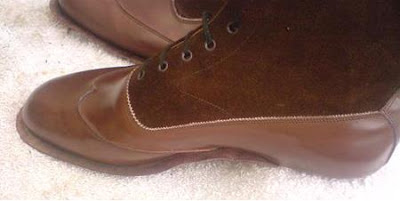 Make those cap-toes and I’d be green with envy. For now all I can see for winter is a pair of Paul Smith boots that are out of my price range. Why must dress boots be so hard to find?

I’ve read about Cliff before, but I’ve not seen his contact info listed anywhere. Might you be a sport and add the deatails to this post?

How do you get in contact with Ciff Roberts to order some shoes?

This was a few years ago Farouq and I’m afraid I don’t have his contact details.