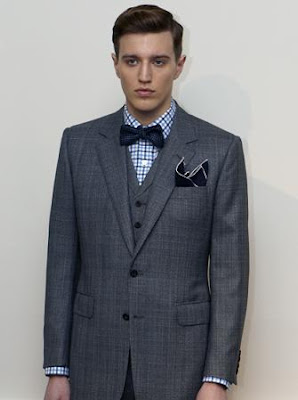 Today was the first menswear show in London I have ever felt inclined to go to – the collaboration between E Tautz, Gieves & Hawkes and Hardy Amies at the latter’s beautiful premises at 14 Savile Row.

Only the second time London Fashion Week has featured a menswear day, this was the first show specifically to celebrate Savile Row brands. A small group of 80 of us, including His Royal Highness Prince Michael of Kent, was treated to Amies’s collection on models occupying the front room, followed by runway shows from Gieves and then Tautz.

It was an odd mix of presentations. The front room was too small for more than a dozen people at one time to see the Amies collection, so many returned upstairs for coffee. And the Gieves collection was rather uninspiring, though I was distracted by the Edward Green shoes the models were wearing which, being brand new, slipped and slid rather on the carpet. 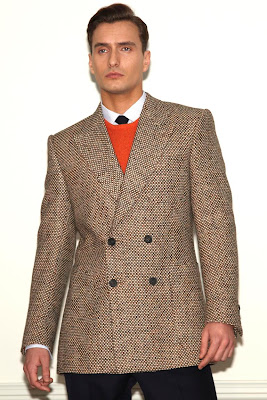 E Tautz, however, was a different matter. Patrick Grant introduced each look, explaining which school he had stolen the pattern for the scarves from, which grannies in south Wales had knitted the mittens, and precisely how a weaver had rescued tweed patterns that had been thrown out with the trash (that’s the pattern, above).

The silk was woven by “guys in Sudbury, Suffolk” and the bow ties made by “our friends down the road in Old Street”. Regular readers of Permanent Style should have no problem identifying either of those two.

Glen checks were very popular, usually paired with knits or at least knitted ties. The great coat shown here was rather inspiring, its rising rows of buttons making even a skinny young boy look manly. And the kilt? Well I’d never wear it but it’s the most attractive kilt I’ve ever seen. Those leather straps at the side were nice. 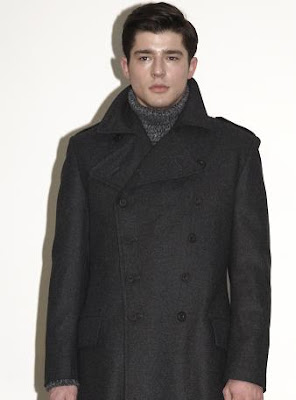 My favourite piece, though, was undoubtedly the short double-breasted casual jacket in an exploded herringbone (below). The narrow crossover, long pockets and chunky weave made it a wonderful classic/contemporary piece.

Doubtless a success for Tautz. Perhaps Grant is taking his cues from Victoria Beckham – after all it was her running commentary that ignited her recent collection in New York. 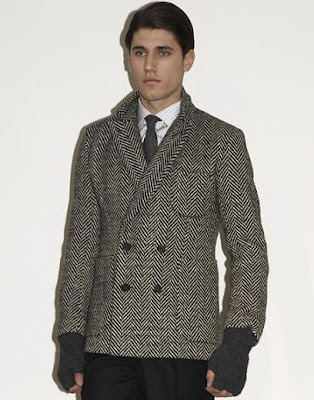 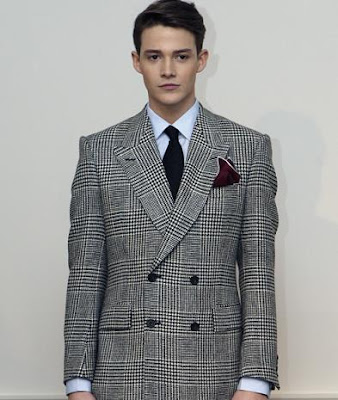 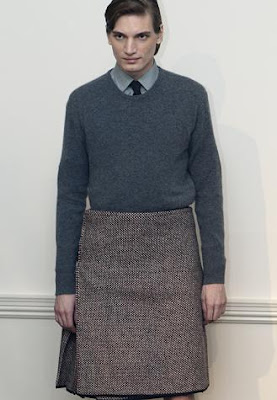 You can follow the discussion on The view from the front (Savile) row by entering your email address in the box below. You will then receive an email every time a new comment is added. These will also contain a link to a page where you can stop the alerts, and remove all of your related data from the site.

I think the thing you will give up most, by ordering bespoke anything online, is fit. The product should be otherwise the same. So it depends how much you are buying for fit (rather than craft, style, customisation etc). And, perhaps it's worth going for…

They were RTW from Paul Stuart I'm afraid.