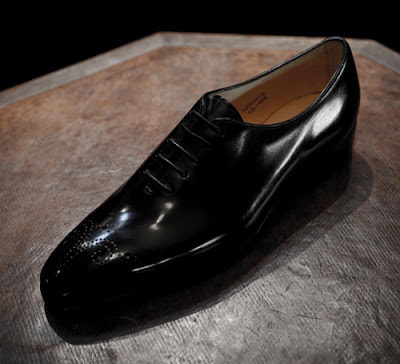 In the first part of this series, I described the measuring process for having a first pair of bespoke shoes made at GJ Cleverley. The second step, though of course it takes place in the same session, is deciding which material and model of shoe you would like.
Unless a client wants something very extraordinary, the design options are presented around the racks of Cleverley’s ready-to-wear and semi-bespoke shoes. Everything from a whole cut to a toe cap to a wing tip (not to mention casual, monk or derby), with every fraction of brogue in between. Here a quarter brogue is a toe cap with brogueing on almost every seam, but no medallion on the toe. A medallion makes it a half brogue and a wing-tip into a full brogue.
Clients of George Glasgow’s at Cleverley have even requested one or two thistles to be brogued onto the heel of the shoe in the past, in order to make it more individual. But that’s a lot of holes in one shoe.
Most important in designing a brogue is to keep the patterns balanced. Don’t insist on broguing on the vamp and the counters, perhaps with a thistle, yet nothing across the toe.
I already knew I was going with a deep-brown shoe, as I wear that colour more than black and I want these shoes to be as adaptable as possible. My other pair of dark-brown shoes are half brogues, so this design will be cleaner.
I asked Mr Glasgow if he could think of any combination of lines, medallions and brogued seams that have never been commissioned before. (These are bespoke shoes after all.) He looked through the window briefly, as if running each permutation through his head. Then said no.
In the end I went for a clean toe and one brogued seam, running below the laces and finishing at the welt just in the middle of the waist. As you would have on a brogue, but without any decoration at toe or heel. It was the same design as a Cleverley balmoral on display, except with the seam pulled down half way. I’ve never been a fan of balmoral shoes (boots are a different story) – the horizontal line lacks movement to my eye. 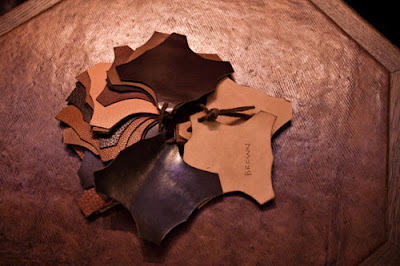 Next, the choice of leather. Two bunches “of the brown family” were brought out, including kudu (as a general terrm for deer), hogskin and crocodile, as well as calf in a variety of grains. There were two dark browns, one of them cordovan. While I’ve never had cordovan shoes, Mr Glasgow was against the choice, suggesting that ungrained cordovan can look a little plastic and believing its thickness was more suited to country shoes.
On to soles. How thick do I want the sole? I have no idea – just like I had no idea how long the rise was on my trousers until I had bespoke suits made. Here having models on display is crucial. I pointed and George nodded.
The size of the welt? It can be cut very tight against the upper, leave a little room or be wide enough that it is invisible from a top-view, visible elsewhere. I went for the latter. Apparently people also vary the size of the welt around the shoe, with some preferring it to jut out slightly more at the toe – perhaps to give an impression of length. I skipped that. 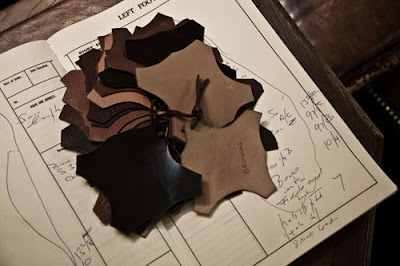 Then finally there is the lining. Cleverley has quite a selection of different colours and this strikes me as a nice way to make a bespoke shoe your own, while keeping the outside conservative. I’ve never been a fan of bright suit linings, but then no one will see the inside of your shoes. Except your wife and the airport security guard.
The most popular lining options are red on a black shoe and racing green on a brown. The book was elsewhere so I’ll decide at a later stage. But bright yellow looks good in my head…
Next: the making of the last

Guest Comments »
It’s interesting the sort of things you never think about until you’re given the choice. The danger is that once you start to like a particular style that you can only get with bespoke shoes, you’ll find it hard to go back to off-the-shelf!

Still; very interesting to see the process. I’ve never had any bespoke shoes myself, but it’s something I’d like to do at some point.

Nice article. I’m jeaulous, but am having some work done by G&G at the moment – a loafer, because my foot shape really doessn’t work for rtw loafers unless they’re elasticated (yuck)as I have a high instep.

What’s their take on leather – what should you choose if you want the shoes to get a nice patina? I’m told that the upper leather should be vegetable tanned and aniline dyed. Is there more to consider?

All the leathers conform to those two standards, as all should. And any good calf leather will produce the same patina if worked in the same way. Anything with a texture – like a grain, or an animal print/skin like crocodile – won’t produce as good a patina though.

Having so much fun going through your archives from oldest to newest. I was initially trying to go through as quickly as possible, but now just enjoying the ride…