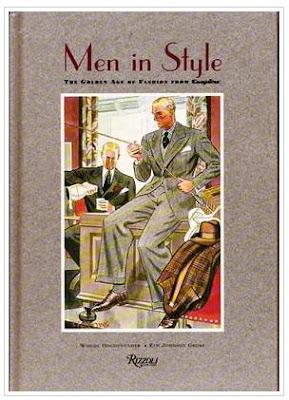 This book, which I mentioned in a recent post, is rather an inspiration.

You know how you flick through men’s magazines, hoping against hope that there will be an inspiring fashion shoot of suits, ties and shirts, demonstrating bold colour combinations you hadn’t considered, illustrating textbook use of pattern density and pushing the boundaries for contrast in texture? Styling that encompasses the rich past of menswear yet energising it with effective modern interpretations?

Well I do. And outside an occasional spread in the Esquire Big Black Book, and slightly more frequent line-ups in The Rake, they are hard to find. Inspiration for me more often comes from runways, blogs like The Sartorialist and men I just see around on the street.

Which is ironic. Because the illustrations from Esquire that are collected in Men in Style are a composite of those inspirations: what men are wearing, slightly idealised, and slightly styled. No one sits quite that nonchalantly assembling his fishing rod, perched on the edge of the desk. But men are wearing wide peaked collars with single-breasted suits. And the pattern combination among check, herringbone, stripe and crocodile is certainly inspirational.

Esquire was some magazine, containing articles and stories by writers like Ernest Hemingway, Dashiell Hammett and John dos Passos. It was progressive, boldly printing a tale by a black author about a romantic multi-racial triangle – at readers’ request. And most importantly, it employed some great illustrators – particularly Laurence Fellows, Leslie Saalburg and Robert Goodman. Each had their strengths, but all could paint texture, cloth and drape extremely well. This was their primary skill – where modern fashion shoots focus on atmosphere at the expense of detail, these illustrations showed the shine of every button and the subtlety of every pattern.

Those were the good old days, you may say. No one would produce that kind of thing now. But when Esquire launched it was entirely unique on the newsstand. As Woody Hochswender says in his introduction, “the conventional wisdom was that men were not interested in fashion, at least not interested enough to be caught dead looking at it in a magazine.” So Arnold Gingrich, the founding editor, sought articles “substantial enough to deodorise the lavender whiff coming from the mere presence of fashion pages.”

Men’s fashion magazines today feature many articles. But you wouldn’t call many of them substantial. If I see another grooming piece telling me how to shave I’ll kill someone. Hemingway it ain’t.

The original Esquire was brave and different. And it launched as the world clambered out of global recession. Coincidence?

I’ve always found Paul Stuart’s look books to be very worthwhile, but they are a bit short.

Thank you for returning the book; librarians across the country appreciate it when they don’t have to track down out-of-print material.

This is an excellent book. But a Simon mentioned, being out of print makes it pricey (about US$400) last time I looked. With most of the images available in on the Internet – like in Etutee’s posts at the London Lounge – inter-library loan is more often the best way to view this book. Definately with checking-out. And as the gentleman commenting above mentioned, returning too.

A fine book. I keep a copy in my closet as inspiration. We used to carry it at a men’s store I worked in called Britches of Georgetown. I used to give away copies as gifts. Glad I kept one! You’d think that Rizzoli would reissue it.

I was lucky to find one for 50 GBP last year. In one of Amazone’s subshops, nonetheless.
I can’t quite comprehend why it was kept to one print. Furthermore, whilst it is great, it is also limited. I encounter quite a few images on the net which are not in Men in Style.
Is there a copyright’s issue?

My Uncle was Robert a Goodman. He was so talented …I’m proud! Where can I buy
The book?

It’s out of print I’m afraid, you need to look at second-hand sellers